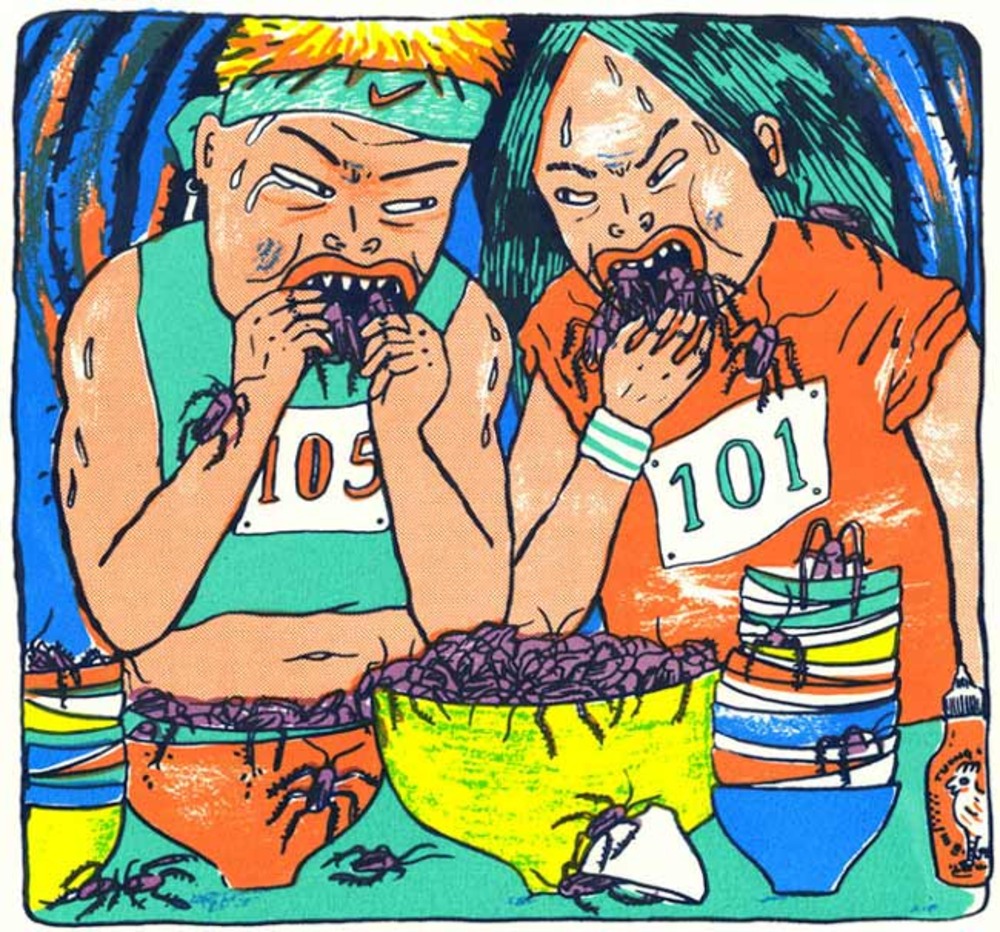 Describe your workspace to us.

It's usually pretty messy. I feel weird working in really clean spaces and it makes me more intimidated to put pen to paper. I want to see my past sketches, ideas, inspirations, references, scrambled everywhere or stuck on my walls since I like to bounce off my old ideas. I usually have Wu Tang Clan, Do or Die, or some funk radio station playing.

How did your interest in comics arise?

I watched a lot of anime dubbed in Korean when I was younger. My favourite was this basketball anime called Slam Dunk. The anime channel or Cartoon Network was almost always playing in the background in my household. My mom also read a lot of manhwas (Korean comics) and she got me to read them to learn how to read and write in the language. But my favourite comics as a kid were Calvin and Hobbes and TinTin. I got into comics more seriously when I went to SVA for college and took David Sandlin's book-making class. He's super awesome. 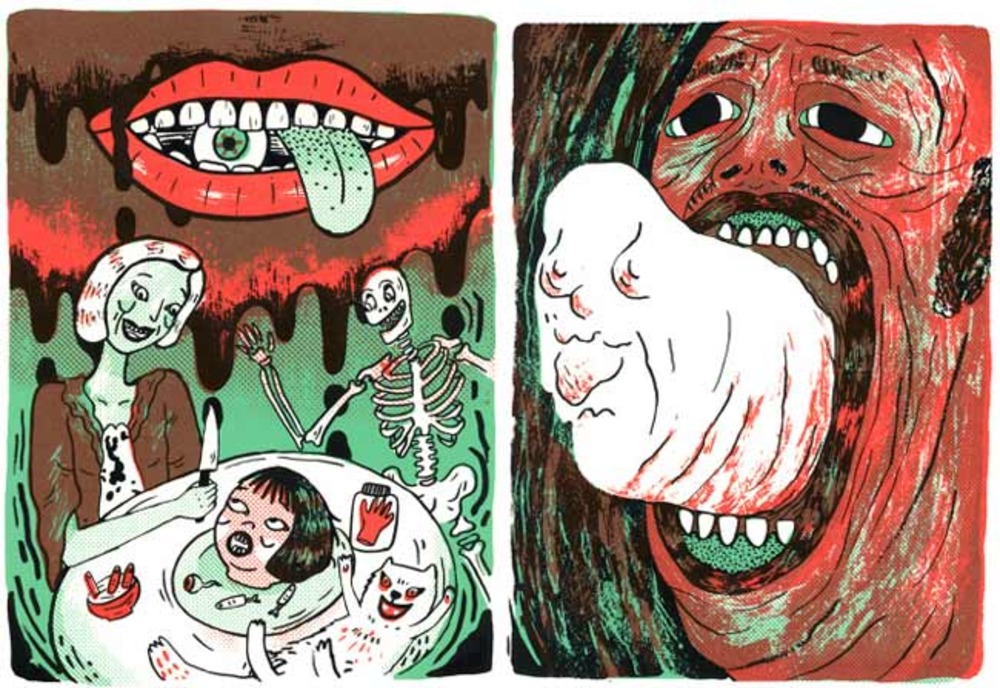 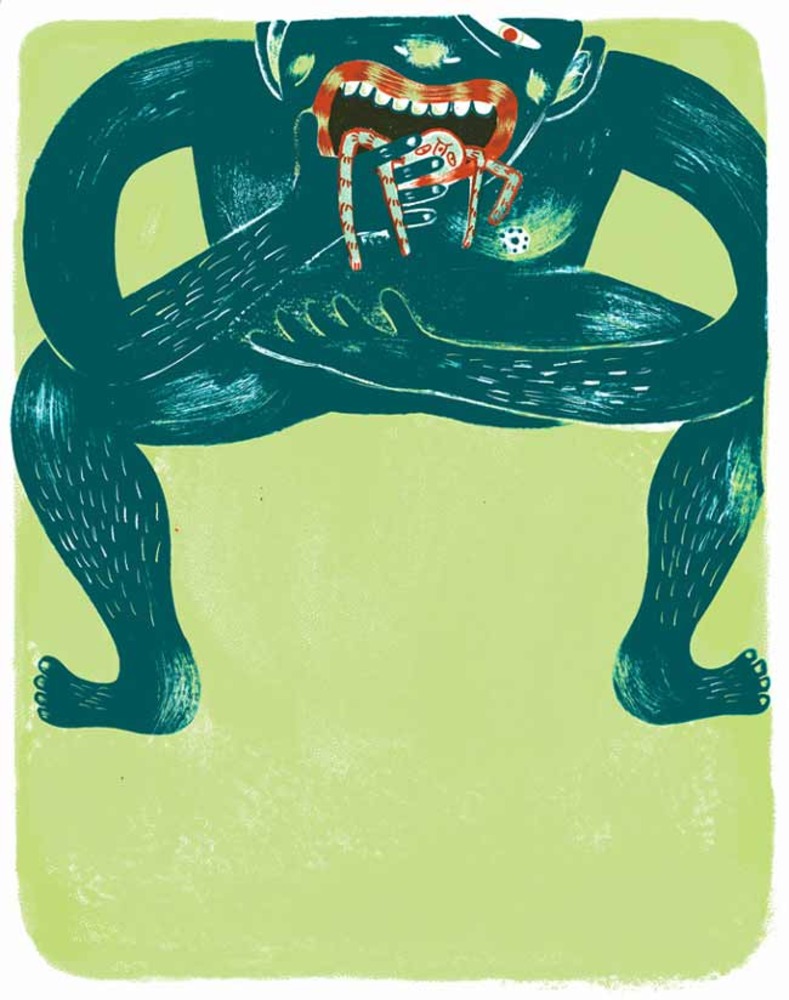 Attack of the Two-Legged Monster, April 2014 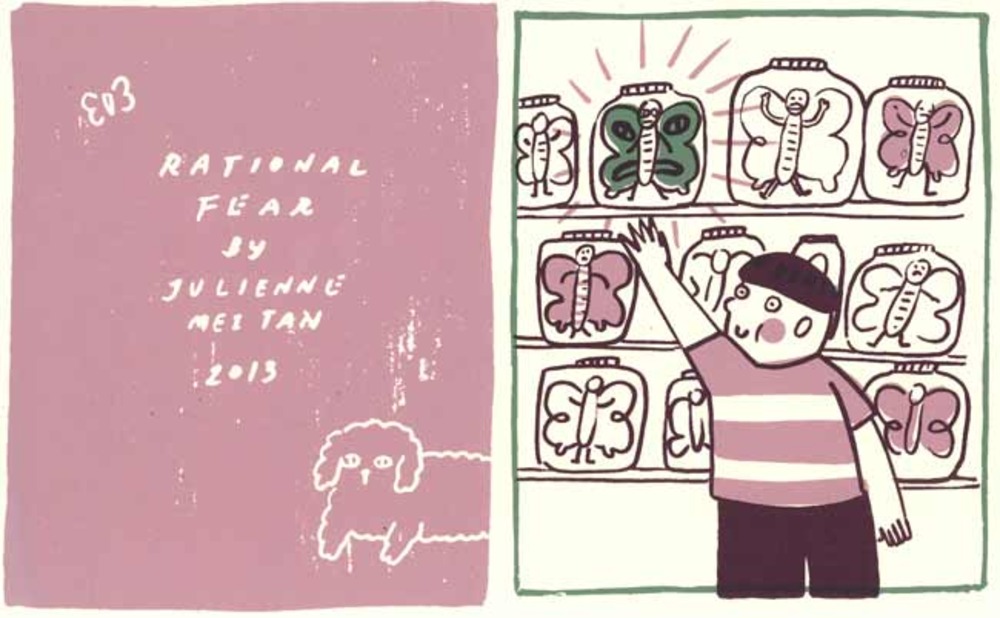 Who are your heroes?

My dad is one of my biggest heroes. He moved back to Cambodia when I was younger so I only got to visit him once or twice a year. I was sort of resentful about him moving to Cambodia since it was so different from where I grew up in Seoul, Korea. But he worked really hard to get me and my brother to visit and experience our Cambodian roots. He really made me realise to how vast and beautiful the culture is there and it helped me step out of my comfort zone. He's always been supportive of everything I've done and is overall an awesome person with a lot of knowledge to share.

As for art heroes, I really love and admire Tadanori Yokoo. I remember seeing one of his posters in a bookstore when I was younger and was blown away by how intense and bizarre his world was. His work got me into illustration, basically. 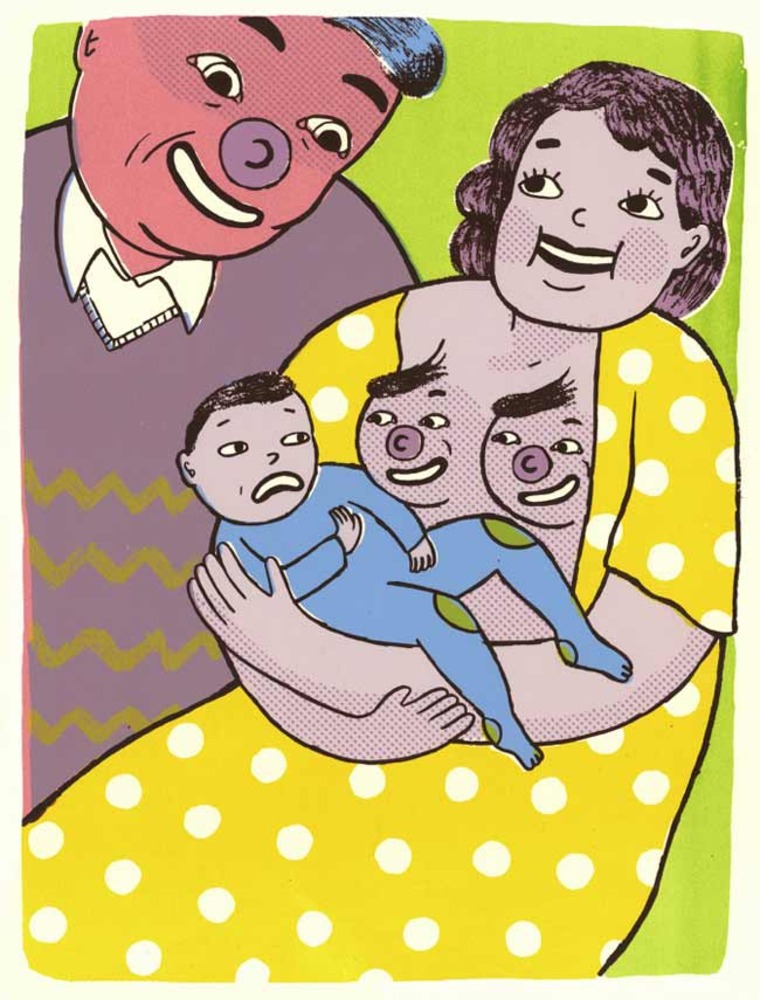 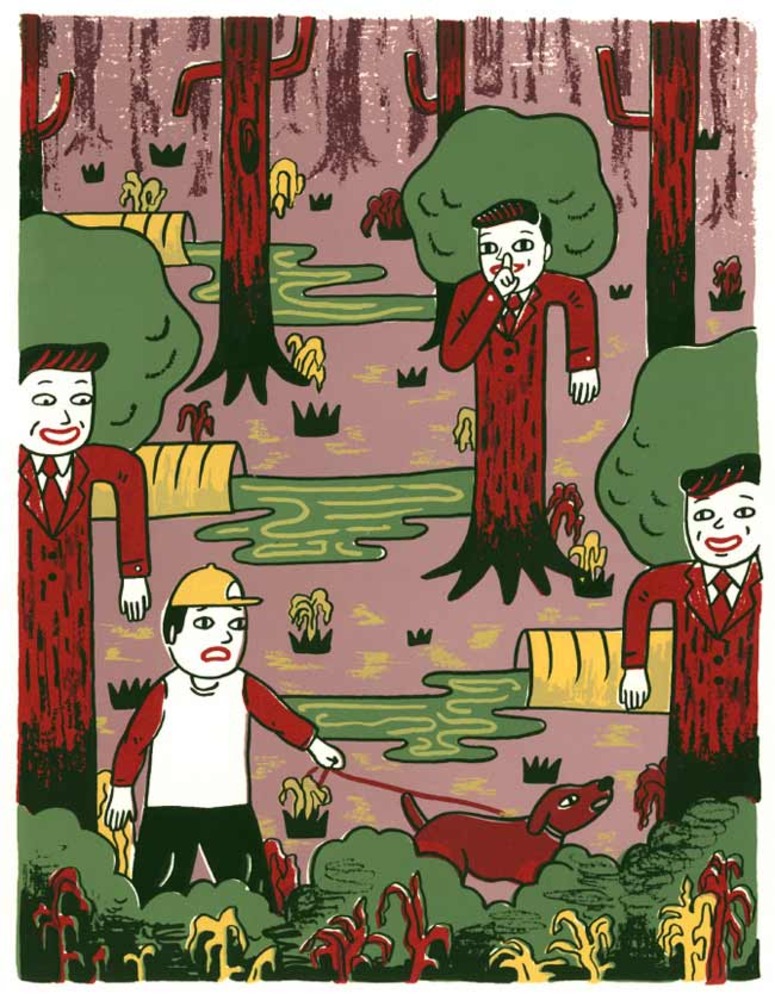 Drink apple cider vinegar when you're sick. I have been drinking it for four years now and have never looked back. Also, don't be afraid to make mistakes.

What's your most invaluable piece of kit?

A brush pen and a razor.

Tell us a trade secret.

Don't rely too much on computer brushes or textures. Do things by hand as much as possible. Razors and sandpaper make great textures.

What's been your most interesting creative collaboration?

I've been working with my friend and illustrator Jane Stephanny (www.janestephanny.com) to create a line of t-shirts and fabrics for a brand we're starting up. It's been a challenge printing on fabrics and other materials that are not paper but it's been great. I'm also working on a silkscreen book with another illustrator and friend, Giulia Venturelli (www.giuliaventurelli.com) about the bizarre stuff we experienced in Cambodia and that's been really fun. I really enjoy collaborating with my friends and like-minded people who share my sense of humour. 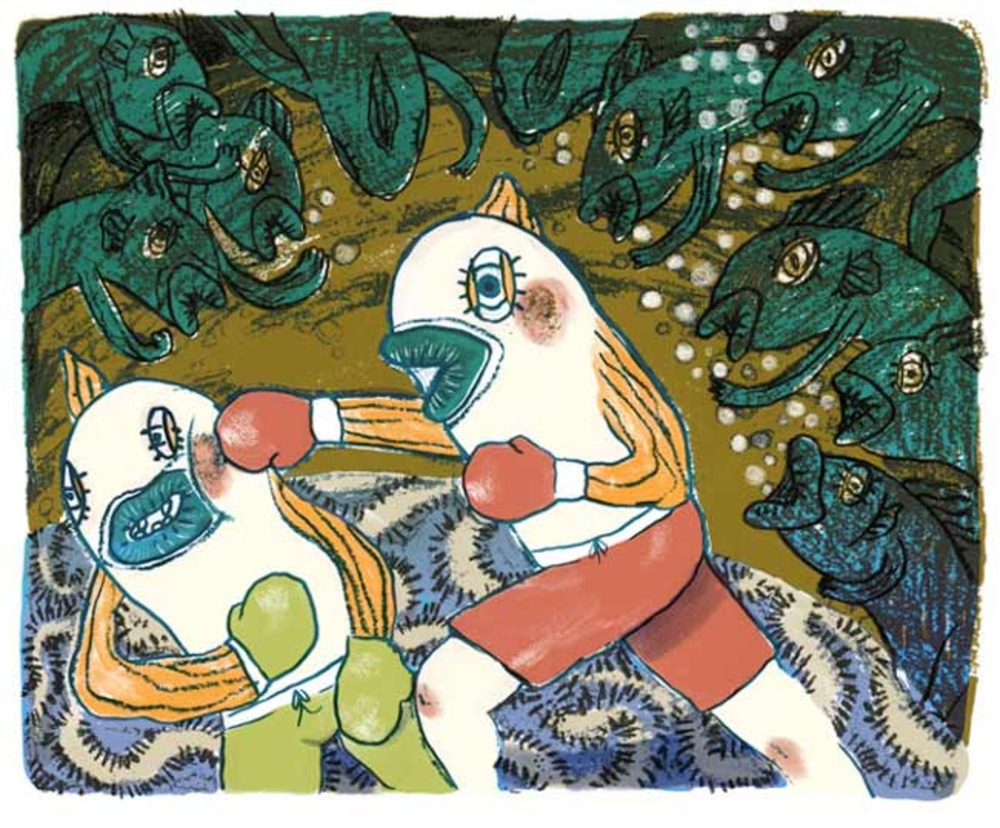 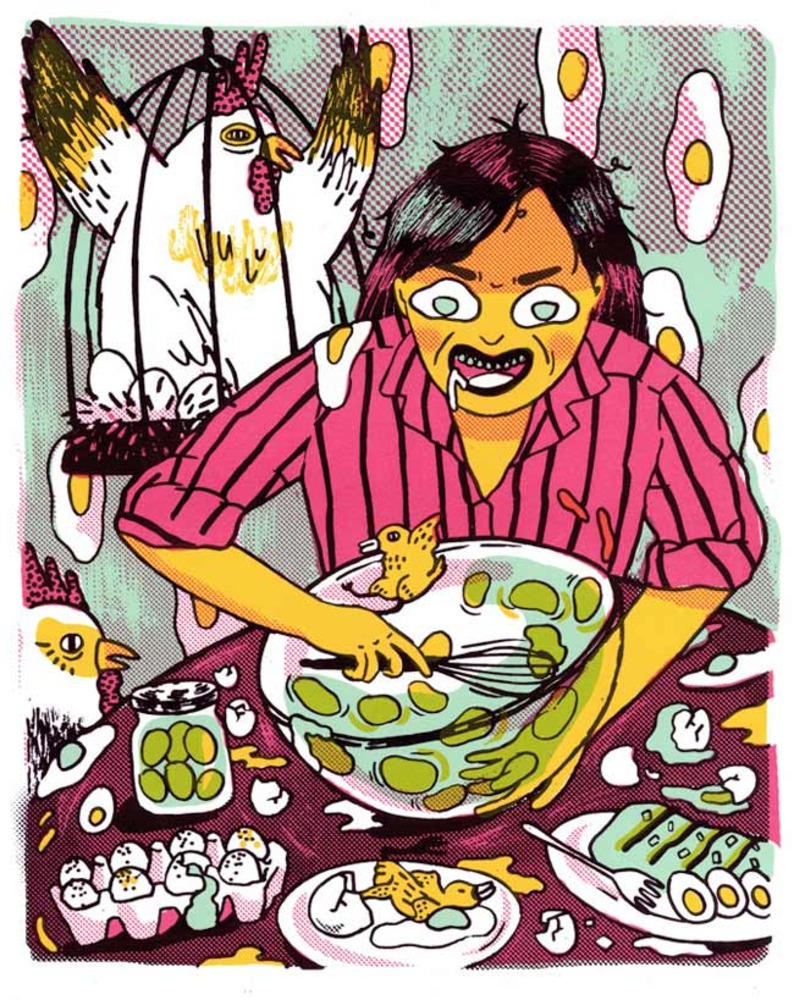 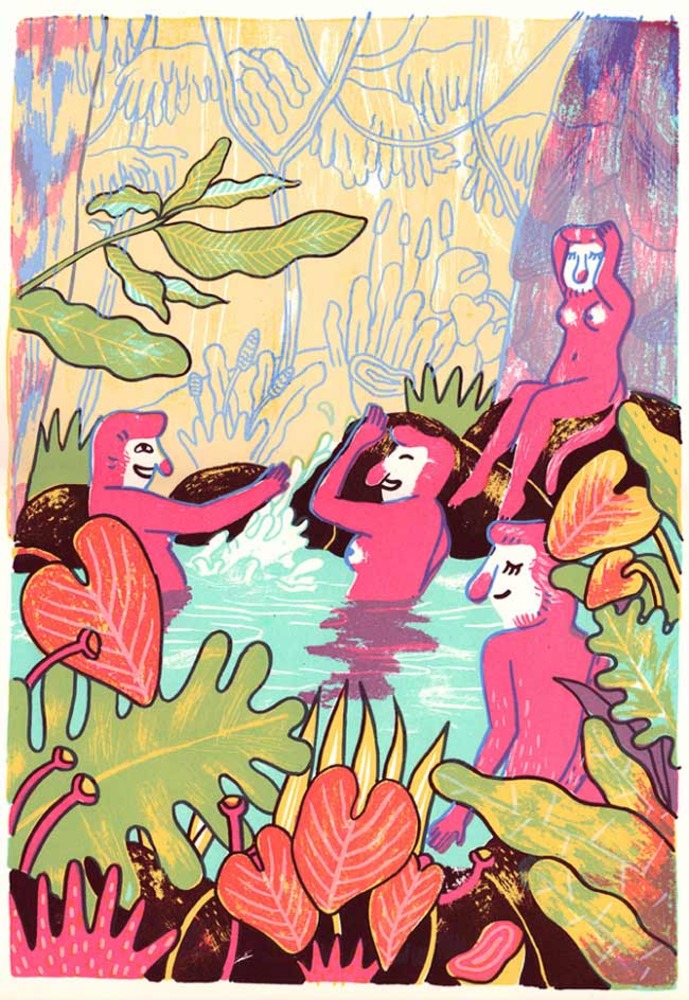 Where would you like to be in a year's time?

I've never lived in my country of citizenship and I've moved around a lot so I'm looking forward to settling down somewhere where I can focus on my illustration. I'll be moving to Malaysia in a year to set up a print studio with a few friends. Wherever I am I want to continue exploring silkscreen and print-making.

What would be your fantasy commission?

I've always wanted to do an album cover for an artist I admire, like Snoop Dogg.

If the building was on fire and you could only grab one thing from your studio/desk, what would it be?

That's really hard because I have a ton of really cool artist books and prints I've accumulated over the years I've been in New York. It would kill me if I saw them burnt in a fire. I guess I'd take my laptop though, since it's my life's work.