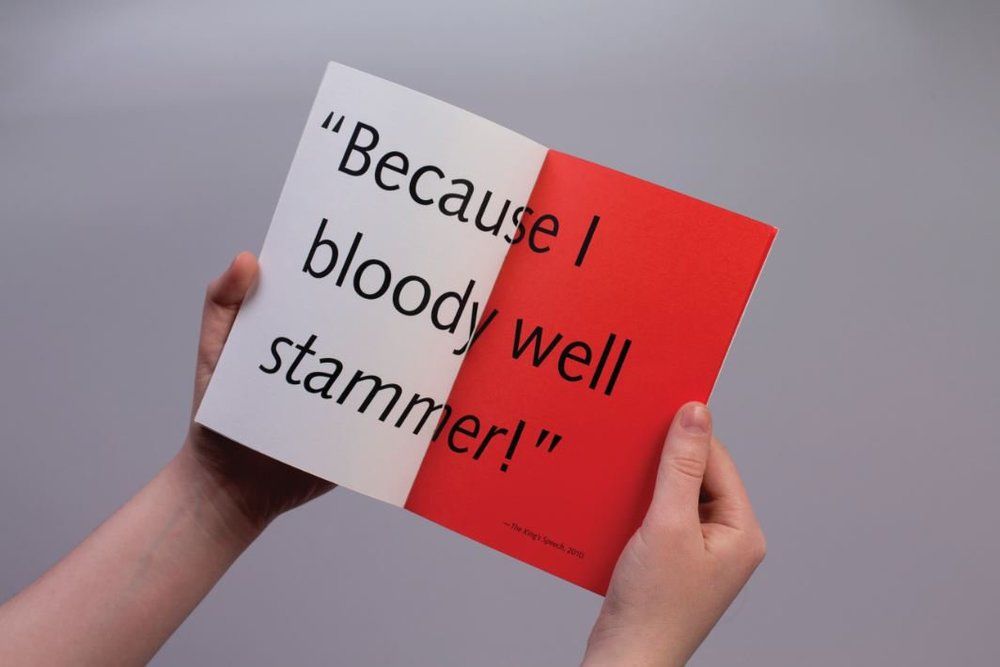 Spread from The Curious Paradox

Conor Foran is in the enviable position of having just received one of the most prestigious awards in typographic design – the ISTD's Vincent Steer Award, given to an outstanding project in its annual Student Assessments. We caught up Conor find out what's next for this talented young designer…

When did you first realise you wanted to be a graphic designer and what were your early influences?
This is a difficult question. I’m still in the process of figuring out if I am a graphic designer. That may sound strange, but I suppose it’s down to how fast I have come from school to college and now to work in a studio, all in a three-year period. I’m still discovering what I like and dislike, what interests me and what doesn’t. I think it’s only by throwing myself into situations where learning and making mistakes becomes an everyday practice can I really understand what I want to do, and what I can do.

Words and the concept of textual meaning has always fascinated me, so much so that I wrote my thesis about it all. It is what spurred me to take up graphic design. Having this ability to share stories and start conversations through publications, posters and other means is something that has always interested me.

Tell us a bit about your course and what it’s instilled in you as a designer?
The course I did was Visual Communication in the National College of Art & Design, Dublin. It’s quite broad, though there is an undeniable emphasis on print. However, what you learn in a print context can definitely be applied to other situations. The course allowed for a lot of freedom and experimentation. It gave me the opportunity to dabble in a lot of different things, such as print, video, sound and experimental coding.

I also did Visual Culture as a joint course, meaning I wrote more essays per year. While this may sound like extra stress, at times it was a strange kind of escape from all the work going on in studio. In most cases, the things I learned in those seminars helped to inform or at least influence my own studio work.

What this has all instilled in me as a designer is the realisation that there’s always something new to learn and explore. Grasping this as I move into a professional setting is difficult as for me it’s a battle between understanding what I know and what I should know in a given situation, and dealing with the expectations that follow.

Was art school what you were expecting, or were there any big surprises?
I was eighteen when I started, so there were many, many surprises! I had never really thought about the kind of people I would meet there before I started, I was always thinking about what kind of work I would be creating. So looking back the biggest surprise for me was the people that I met — all the friends that I made that I will have for life. There’s really nothing quite like being in an environment with other creative people and the bonds that ensue.

What’s the best thing about being a student in 2017? And the most challenging?
The best thing is how interconnected everything is. Social media is both a blessing and a curse, but in terms of being a design student/graduate it allows you to discover what is out there. You can talk to other students or designers from anywhere in the world — you can see their work and get inspired by it. And it’s really incredible to know that all of us are part of this network; it’s a two-way system.

The most challenging thing has to be the expectations. No one quite knows what will happen after college. It’s dealing with self-made expectations of what should happen, and those of friends, family, tutors and others. Every case is different but I know for me it was important that I kept moving. We were always told in college that your first job is the most important one, but for a lot of people the luxury of being able to pick and choose the job just isn’t there. I think no matter what, you can mould every experience to fit; you can learn from every situation. It all plays a part in where you eventually want to go – I hope.

Tell us a bit about Bare magazine, and your plans for that.
Bare started back in my second year of college with my two friends Deirdre Rawle and Lucas Garvey. It’s a magazine that focuses on promoting the work of NCAD students and staff. We’ve had two issues, with launches that acted as exhibitions of the work featured in the magazine. As Co-editor, it was a great chance for me to again return to my love of reading and writing. I think it’s very important to do extracurricular things when you’re in college — it keeps you busy, and gives you that opportunity to create work you wouldn’t normally be able to make in your course. I’m a firm believer in creating opportunities for yourself, and realising that doing more will garner more opportunities. The people I’ve met because of my involvement in Bare in a way really supersedes any skills that I learned in the process. I wouldn’t be where I am right now if it wasn’t for all the people that I’ve met along the way, and not just through Bare.

What did you get out of completing the ISTD project (above and below)?
When we started doing ISTD in college I really would never have thought one project could be so beneficial. I'd recommend for every student to do it. I learned an enormous amount of skills and technique, and a lot about psychology! My project was focused around the life and work of Sigmund Freud, so understanding the content I was working with was initially very difficult. At some point during the project, it clicked with me just how much I treasure the opportunity to dissect a brief and construct a concept from its disparate parts. I enjoyed being so invested in work that allowed me to break it open, revel in its research, above all to love the process of discovery. I’m extremely grateful for all the advice and expertise I got from all my tutors in NCAD, namely Jamie Murphy and John Paul Dowling. Oh, and yes, of course, I’m very excited to spend that book voucher…

Longterm, are you looking to work in a studio, or are you thinking of going it alone?
I started interning in Dublin-based design studio WorkGroup the day after my grad show ended, and that was over a month ago. It’s been a very fast few weeks, what with interning and the ISTD awards, as well as making some though decisions as to where I want to go next. I think for the moment working in a studio is best for me. I’m trying to soak up as much as I can right now regarding learning new things and there’s no better place than to do that than in a studio like WorkGroup. I’ve made sure to maintain personal work, however, so I feel I’m getting the best of both worlds right now.

What’s next for you?
I always told myself that once college ended I’d take it a bit slower regarding my work-load, but I think it’s just a matter of me enjoying it all a bit too much. Amongst smaller personal projects which are in very early stages, I’m trying to push the work I created for my graduate show as much as I can. As a person who has stammered all their life, my work was centred around the presence of the speech impediment in society. I created a publication called The Curious Paradox which features interviews with stammerers, including English rapper Scroobius Pip. I also got a few words from Benjamin Cleary, the director of the Oscar-winning STUTTERER. This kind of journalistic approach to design which in a way is linked to social design is something I’ve really become interested in. I would love to push it beyond its current state of just being a piece of college work because there really isn’t anything like it that exists at the moment. For me the work falls into the category of designer as advocate with platforms for discussion being created around the issue. Overall it’s made me ask many questions about what the role of a graphic designer really is, and I hope that whatever is next allows me to confront these questions again and again.