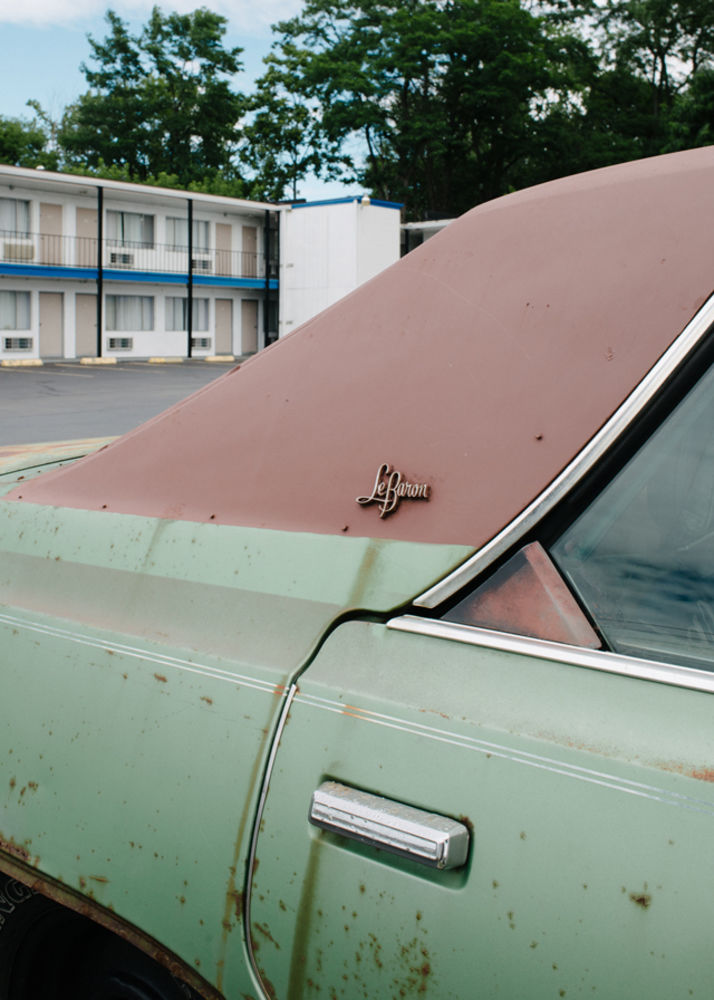 From the heydays of Harley Earl and Raymond Loewy on through the late 1960s, American cars were juggernauts of style. The studios of Chrysler, General Motors, Ford, and a number of smaller marques produced fanciful rolling sculpture with names like Imperial, Bel Air and Wildcat. And they looked every bit the part, from their swoopy interiors to branding wordmarks in chrome that mimicked the grand forms around them.

By the 1970s, though, in the face of environmental regulation and superior competition from Europe and Japan, the business case for such exorbitantly designed Detroit iron had evaporated. Nearly all mainstream American brands shifted to producing commodities, semi-identical appliances differentiated primarily through massive marketing efforts. The romantic, evocative model names didn’t go away, but it became more common than not for virtually the exact same car to be sold as any number of different models: a Ford was a Lincoln, and a Buick was an Oldsmobile was a Pontiac was a Chevrolet.

In this grim context, masters of letterforms working anonymously inside marketing departments emerged as the de facto stylists of consequence. Indeed, their often whimsical little plastic or metal nameplates epoxied to anonymous trunk lids and fenders and pillars were sometimes the only real character these cars had. Now, with a few decades of patina, these marks also serve as strangely beautiful time capsules of letterform design and fascinating case studies in egregious branding.

The following five were photographed out in the wild in 2016 and 2017. 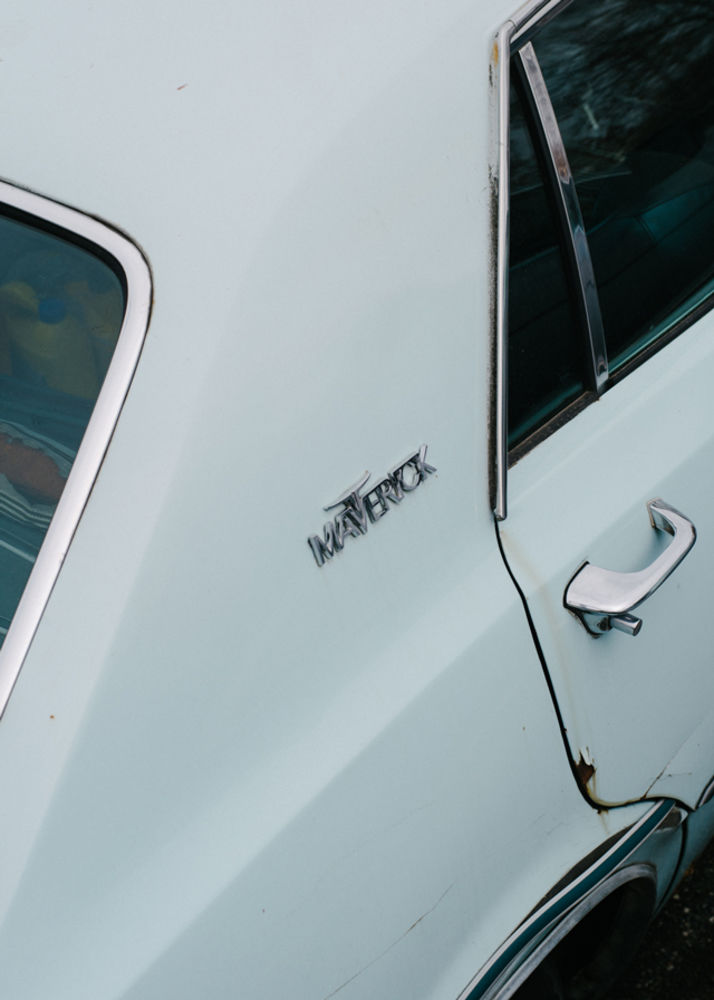 Falling somewhere between the Marlboro Man and a roadside steakhouse, this œstrogen-free mark is a solid work of branding: it more-or-less cloaks a mass-produced appliance in an air of romantic mystique. Still, its relationship to said appliance is fraught with odd semiological contradictions.

The Maverick was a basic, durable, well-proportioned small car Ford introduced in 1969 to compete with the iconic VW Beetle. Though by the 1990s it had become common practice for carmakers to co-opt Western themes to exude ruggedness, the Maverick’s vaguely Texan iconography is a notably early example but is perhaps a bit misplaced on a car not suitable for terrain more treacherous than a country road. One might also question the design wisdom of a mark so clearly evocative of a cattle branding iron for a car marketed as agile and fuel-efficient—after all, nothing says lithe and light quite like cow. Moreover, the connotation is doubly confusing since “maverick” refers most accurately to unbranded cattle. In any case, the squared-off mark’s sober letterforms do hold up rather handsomely almost 50 years later.

This fine powder blue example currently rusts politely in a Philadelphia car park adjacent to Robert Venturi’s Guild House, another midcentury design oddity, also notable in part for its incongruous use of letterforms. 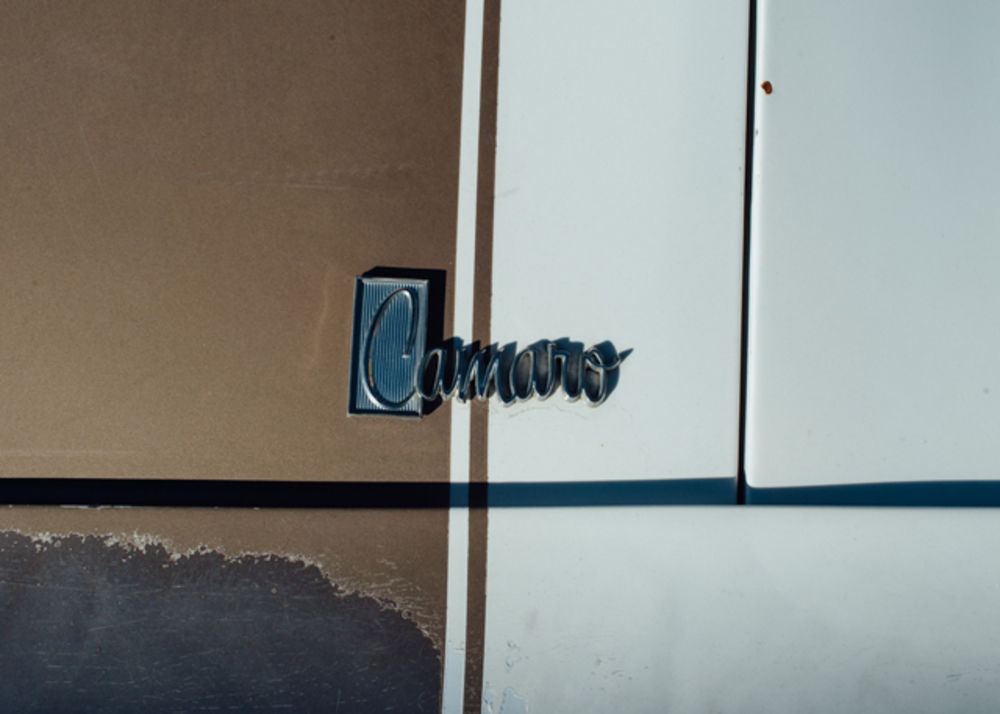 This upright, easygoing script suggests a chilled out nonchalance. It’s a good-looking dropout in rose-colored Ray Bans sipping cheap beer. It’s likeable enough, but ever so slightly behind the times, still jamming wistfully to the Beach Boys when only Pink Floyd and Bowie made sense. It was, after all, attached to a sleek sports car with a shark-like aero wedge shape, a relative masterpiece among garish, misshapen sleds. It was an unselfconscious throwback, a pre-postmodernist nod to boulevard drag races and drive-ins. 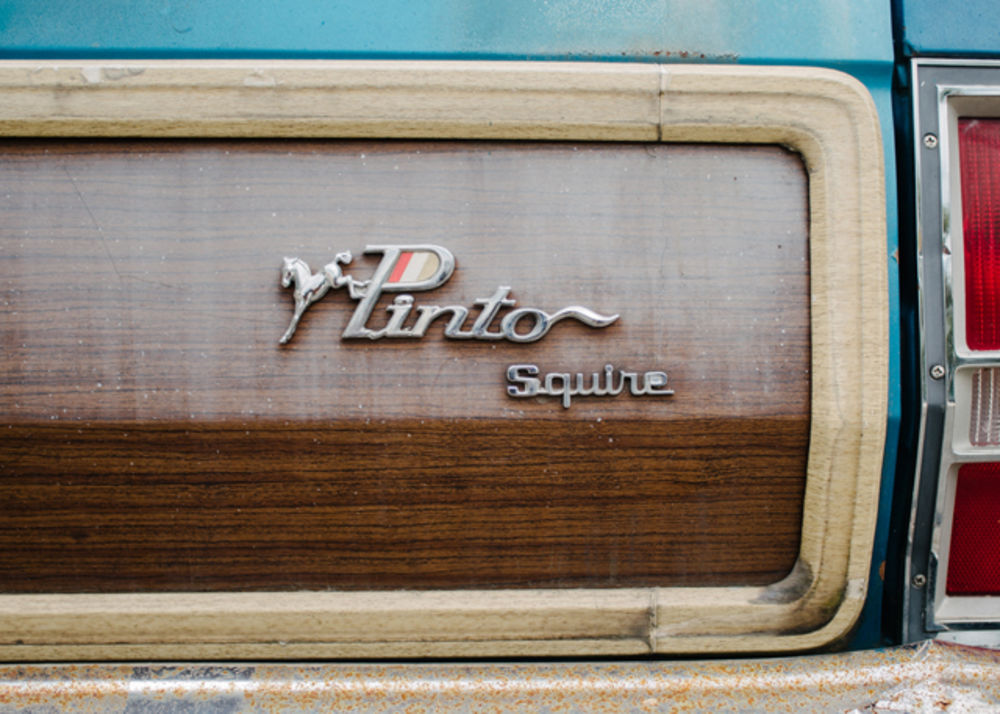 The Pinto was another earnest, unvarnished attempt by Ford to build a small, fuel-efficient car. Unlike the more handsome Maverick, the Pinto’s design was pugnacious and slightly cartoonish, but still looked far more modern than the bedazzled and chrome-festooned land yachts Ford churned out by the millions in those years. Unfortunately, this pint-sized experiment became a PR disaster, as they seemed to regularly erupt in flames after even the most minor of rear collisions due to a flaw in the design and placement of its petrol tank.

The Pinto mark is easily one of the most endearing and emblematic of the 1970s: it is saccharine, dramatic, and is positively bursting with all the naïveté of youth. Its week-kneed ligatures look like a newborn colt’s first shaky gallop around the stable. And much like the underlying car, it works in a so-ugly-it’s-cute way. Alas, the poor little Pinto was put out to pasture by 1980, and to this day remains something of a four-wheeled punchline.

This rare “Squire” estate version, swathed in faux woodgrain, has so far avoided a fiery end. It now grazes the driveway of a bankrupt repair garage in Queens. 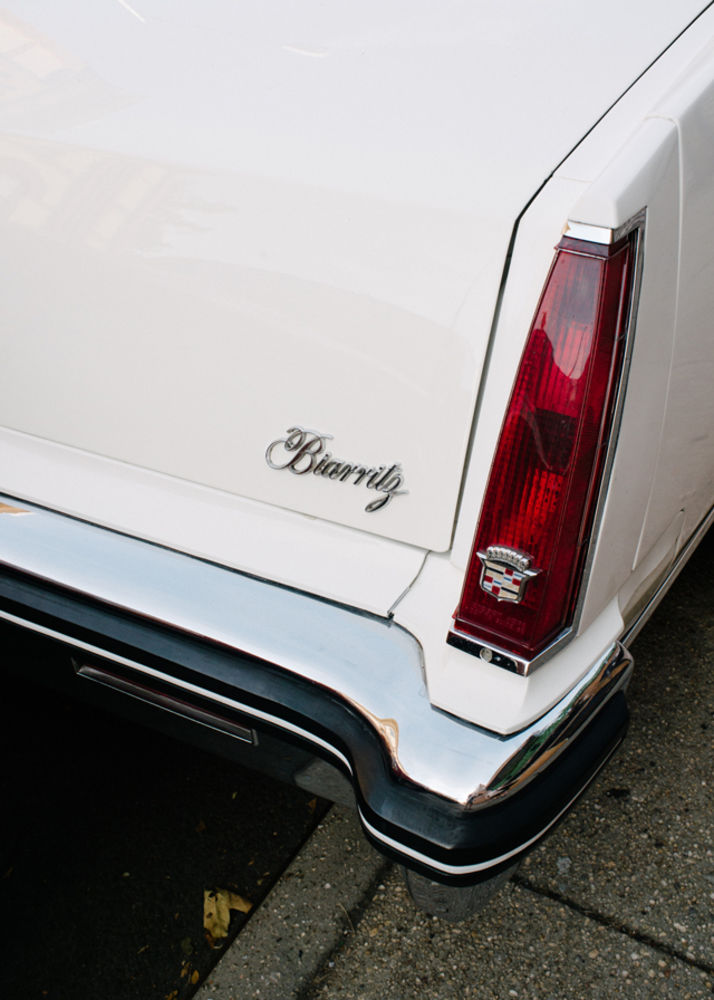 Though they had once been arguably the finest cars in the world, Cadillacs by the 1970s were basically the automotive equivalent of the suburban mall department store: posh enough, indulgently expensive, but too big, lacking in focus, and not at all the pinnacles of fashion they once were. Fittingly, Cadillac’s baroque, jewel-like scripts of the era recall the elaborate, curlicued logos of Saks Fifth Avenue, Neiman Marcus, Lord & Taylor and the like. Together with names like “Eldorado” and “DeVille,” the brand’s offerings undeniably said ritz to consumers of a certain age, but the cool kids had already been shopping elsewhere for at least a decade.

This “Biarritz,” a plusher version of the Eldorado mega coupé named after the beach town in France, was your Republican great aunt’s ride. It was overstuffed easy chairs, doilies, inedible hard candies, and breathless lamentations about how nobody learns proper handwriting these days. 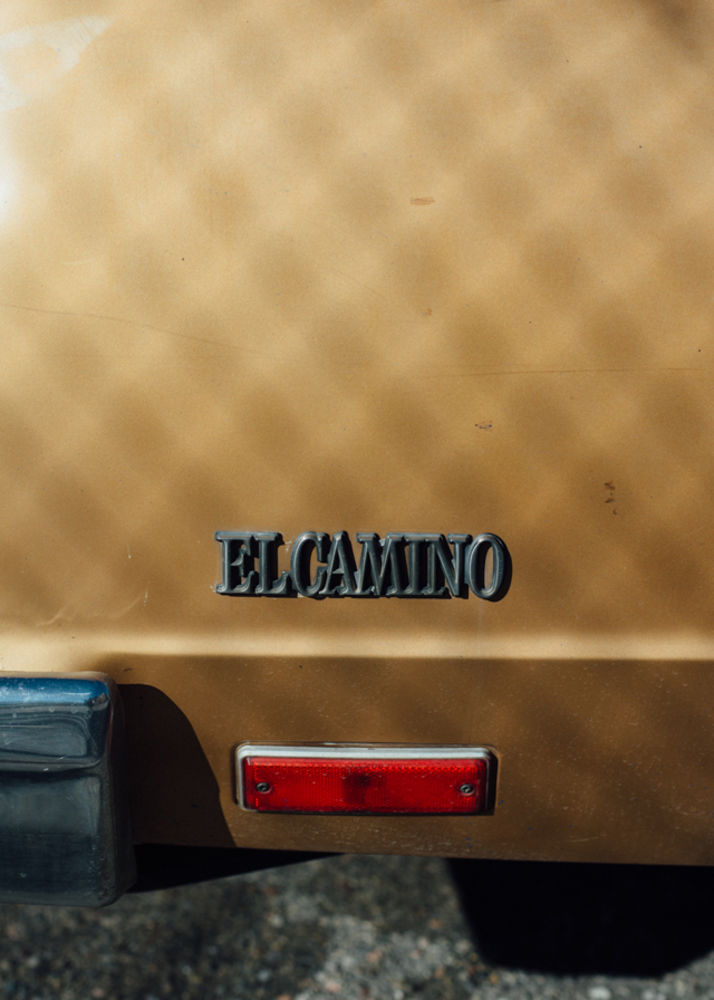 The El Camino was a minotaur of sorts: it had a homely car face grafted, rather gracelessly, onto the rump of a pickup truck. But despite its hybrid nature, it seems to have suffered no crisis of identity. It was a four-wheeled contraption that purported to offer an opportune compromise: it was frugal with petrol and rode comfortably low like a car, but you could use it to haul fresh veg or waterbeds or shag carpets all day long.

This sober all-caps serif would have looked equally at home in a western movie’s title sequence, etched on the mahogany handle of a rifle, or printed on the label of some drugstore whiskey. But in spite of the branding’s rather simplistic attempt at ruggedness, its sum connotation was clear: this contraption was for flouting frontiers, middle-class conventions be damned. Its singular form was decidedly postmodern, and its low-impact/high-utility nature may even have belied some existential angst at General Motors in an era of volatile oil and smog-choked cities.