GraphicDesign& is a pioneering publishing house dedicated to creating intelligent, vivid books that demonstrate how graphic design connects with all other subjects and the value it brings. Our first two books saw a range of graphic designers and image-makers tackle the core subjects of literature (Page 1) and mathematics (Golden Meaning). Graphic Designers Surveyed, published earlier this year, looked at what social science could tell designers about themselves. Not shy of a challenge, our fourth book Looking Good: A visual guide to the nun’s habit takes GraphicDesign& Religion as its starting point, with forays into Fashion and Semiotics along the way.

Dedicated to Sister Mary Corita, the most well-known nun to have worked in graphic design, Looking Good functions rather like a spotter’s guide, employing graphic design and illustration to decode one of the most recognisable visual identities of all time, the nun’s habit. Ryan Todd’s restrained images, which draw inspiration from Otl Aicher’s depiction of Franciscan monk Wilhelm von Ockham, make a feature of the habit as a kit of parts, with details of colour, hem length, and veil shape all speaking volumes to those in the know. Brief texts reveal how the story of the habit is also that of the struggle between powerful and poor; of politics, social care and the role of women; and of the interplay between culture, fashion and faith while additional anecdotes add poignancy, humour and intrigue.

Full of colour and charm, this quirky book demonstrates perfectly how graphic design can lend meaning to the most unusual of subjects. This book will appeal whether you are a lapsed Catholic fashion designer with a penchant for the minimal, left convent school agnostic about hem lengths but fired up by gender politics and church symbolism or have never entered a church but can’t resist trying to crack a visual code. 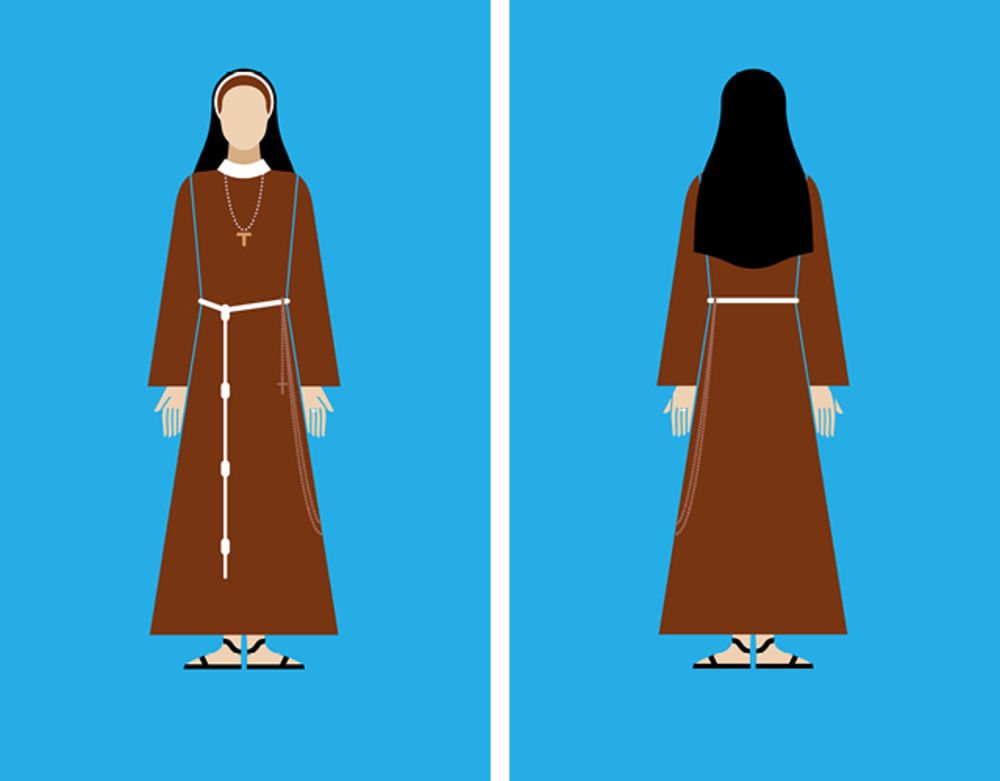 Colour
Brown is a colour associated with the Franciscans whose original habit was made of coarse undyed wool, reflecting a commitment to poverty.

Cord
The knotted cord, worn in place of a more costly belt, also reflects the Franciscan devotion to poverty. Its four knots represent this community’s vows of poverty, chastity, obedience and enclosure.

Rosary
A rosary hangs from the cord. It has seven decades [groups of ten prayer beads] to represent the seven Joys of Mary listed in the Gospels and is known as the ‘Franciscan Crown rosary’.

Sandals
Poor Clares are discalced: they wear sandals to reflect their rejection of material comfort.

& skeletons
Until the end of the 1970s some Poor Clare convents in Italy kept a skeleton that a novice was required to embrace as she changed out of her ordinary clothes for the last time. Called ‘Sister Death’, the skeleton was there to remind novices to shed attachments to anything in this world and instead focus on salvation in the next.

Sisters of the Apostolic Carmel 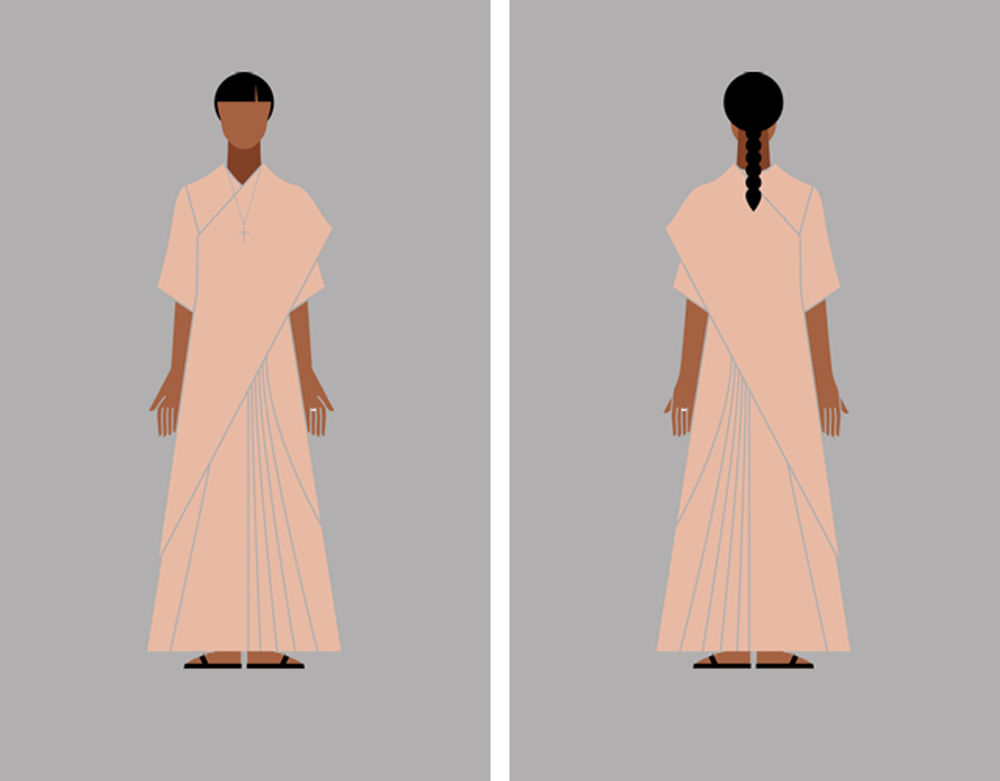 Colour
Carmelites normally wear brown or white, but in many parts of India both are colours associated with mourning. White is often also worn by Hindu priests so, the Sisters of the Apostolic Carmel based in India wear a peach or pale brown sari and sandals, retaining only the simple silver crucifix of their original Carmelite habit.

Tunic
It is common across all of the main apostolic institutes to modify the habit to suit different climates. As dedicated missionaries, the sisters have also chosen to reflect the cultural heritage of the communities in which they live and work in their dress.

Religious of the Assumption 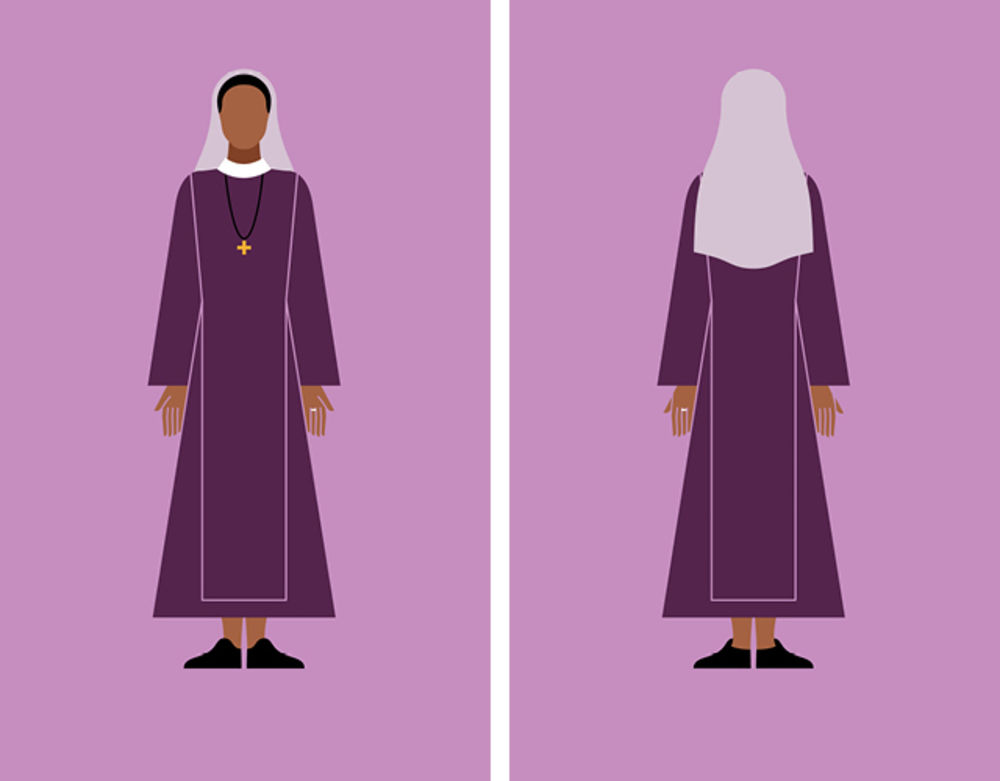 Colour
By the time of their foundation, mass production of dyed cloth made it possible for the Religious of the Assumption to have a violet-coloured habit. Although associated with the Virgin Mary, the expense of this coloured fabric had previously precluded its use. Made through a painstaking process involving the extraction of small glands from dye-murex snails, purple was the preserve of the very wealthy until the invention of synthetic mauve dyes in the second half of the 19th century.

Crucifix
Originally, the Assumption Sisters’ habit included a large white cross stitched to the chest. Some sisters still wear a full habit without the white cross, others wear simplified dress with the cross on a chain.

& publishing
A man of letters, St Augustine is the patron saint of printers. As part of the Family of the Assumption, this congregation was among the first to recognise the potential of publishing and mass media. The Assumptionists founded the Bayard Group in 1870 and continue to sit on its board. Bayard Press publishes 150 magazine titles, read by more than 36 million people each year, and sells 8 million books annually, covering religion, education and philosophy.

Benedictines of Mary, Queen of Apostles 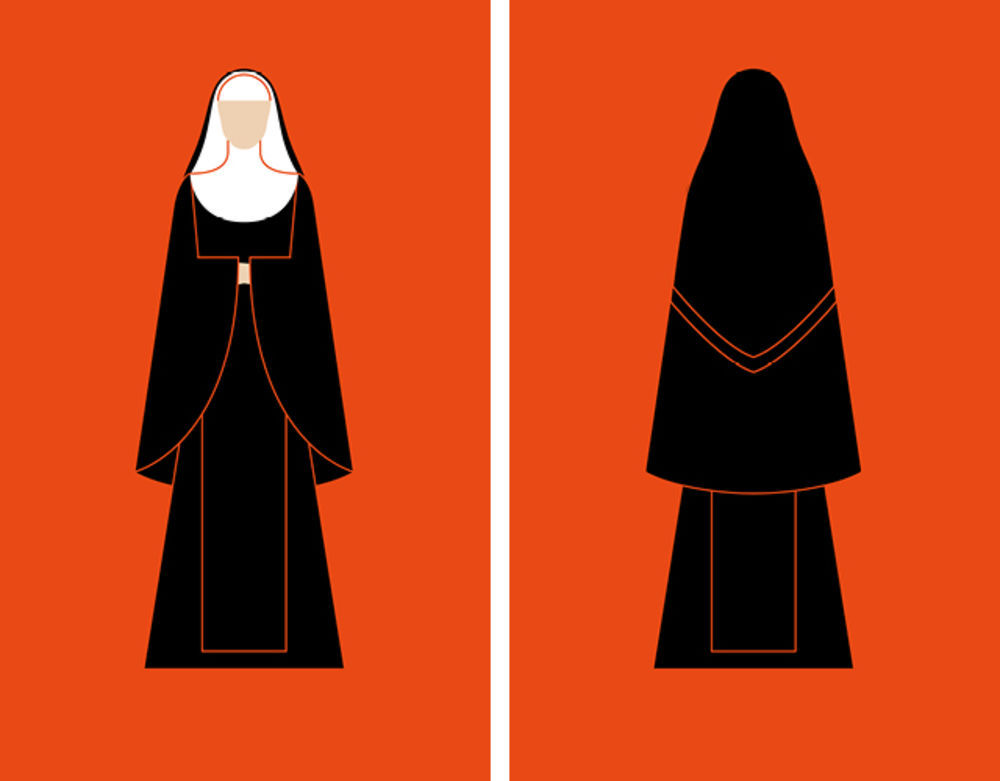 Wimple
Nuns of the Benedictines of Mary, Queen of Apostles conform to a growing trend, especially in American communities, of wearing a full, traditional habit. This includes a wimple that obscures the neck, forehead and part of the face, and is a sign of their commitment to traditional ideas and values.

Cuculla
The cuculla is a long gown, sometimes stitched and pleated, with very wide sleeves that fall over the hands. It is a ceremonial symbol of rank, and is the sartorial predecessor of the gowns worn by judges and academics.

Tunic
Moving every few hours between prayer in chapel and physical work outdoors, the sisters face the challenge of wearing clean clothes for worship. When working, the sisters wear a lighter tunic under their scapular and belt, which they remove for visits to the chapel. 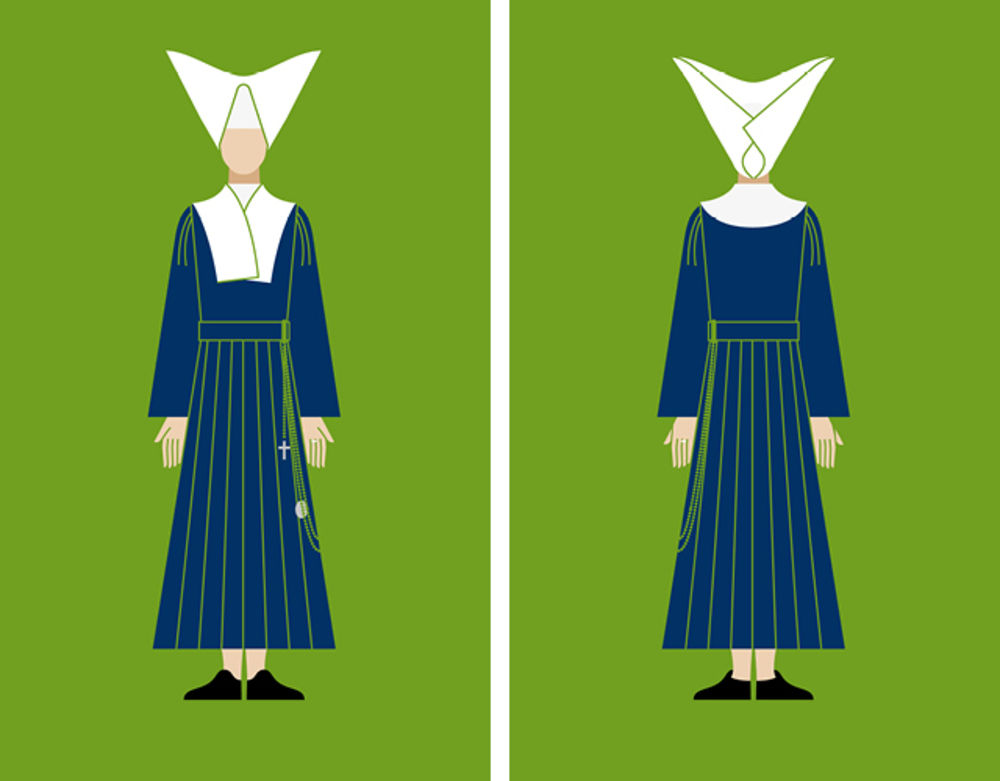 Habit
The contemporary habit of the Daughters of Charity of St Vincent de Paul allows many variations. However, the habit shown here is the iconic ‘cornette habit’ of the 19th-century European community.

Colour
Blue is the predominant colour worn by the sisters, in honour of Mary.

Wimple
With their large bonnets and starched wimples, unchanged until the 1960s, the Daughters of Charity became some of the most instantly recognisable women religious. This extravagant cornette was an adaptation of the simple cap worn by French peasant women and took many hours of starching, pressing and pinning.

& Christian Dior
When the community’s habit was modernised, General Charles de Gaulle exclaimed, ‘One might as well suggest changing the French flag!’ The new habit [not shown], designed in the 1960s by Christian Dior, comprised a simple dress with a deep v-neck and a crossing at the waist.