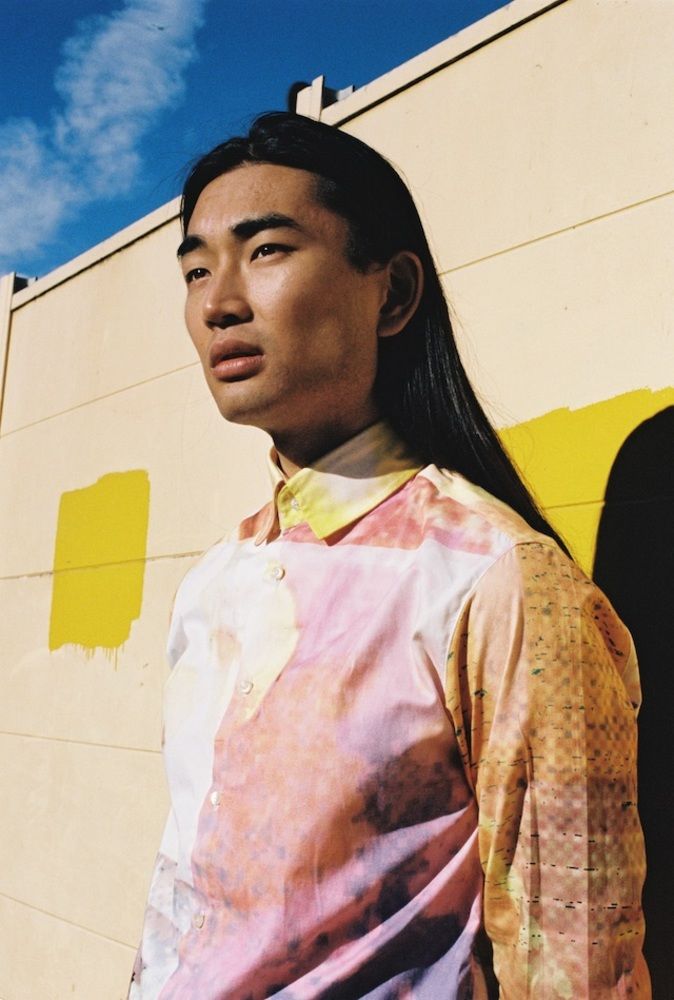 Last year, to mark the five-hundredth anniversary of Thomas More’s radical, satirical book Utopia, London’s Somerset House held a year-long season of events, exhibitions and commissions that set out to explore and experiment with utopian ideas through art, fashion, design, architecture and film. The identity for Utopia 2016 was created by Fraser Muggeridge studio and Jeremy Deller; taking More’s Utopian Alphabet as their starting point, they devised an identity system featuring a new geometric typeface, used alongside a diverse range of images sourced from all over the web that are all related to the word and idea of utopia. 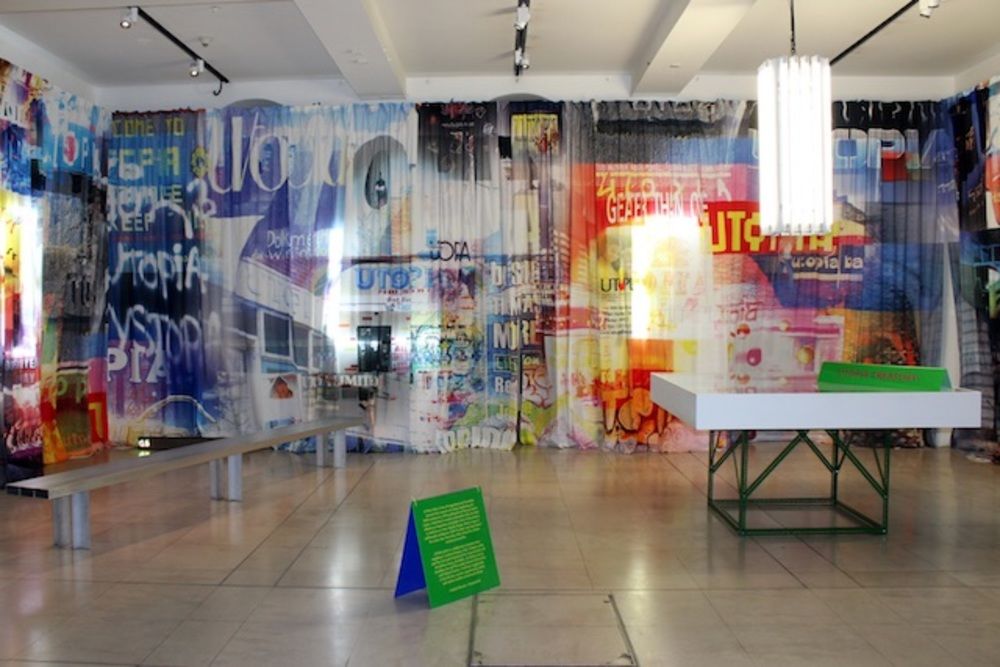 The curtain in situ in the Utopia Treasury at Somerset House, 2016.

One of the identity’s most striking centrepieces was an enormous digitally-printed curtain, lining the walls of the Utopia Treasury — and now the season is over, it has been given a new lease of life as the fabric for a collection of shirts, created by Muggeridge together with Sophie Hawkins.

“The treasury aspect was developed with the architects Dyvik Kahlen, with whom we collaborated with on the design and the content of the space,” Fraser Muggeridge explains, “with the curtain being a clever way of masking its awkward surfaces, finishes, windows, doors and obstacles. Its function was to create an intimate, all-encompassing space, and to act as a backdrop to events, talks, and exhibitions that happened there throughout the year.” The technicolour design of the curtain was created by collecting and combining a range of online visual and written sources that contained the word ‘Utopia’, creating a vibrant collaged backdrop to the Treasury itself. “To us, Utopia is whatever anyone wants it to be; the collaging of nightclubs, coffee shops, computer games created this,” says Muggeridge. “The only requirement for the content was that it had to contain the actual word ‘Utopia.’”

Once the Utopia 2016 season was over, Muggeridge was keen not to see the curtain go to waste, and set about devising a new use for its many metres of fabric. “The curtain was made from digitally printed cotton, so I always had it in mind to make some form of clothing from it — it seemed a waste to throw away such a large quantity of fabric,” he says. “Shirts seemed like a new unfamiliar medium to move into, but I didn’t have any experience or knowledge and didn’t know where to start. I met Sophie Hawkins through a mutual friend, and she had the skill set to cut the pattern and organise samples to get to this stage.” The resulting shirts, which have been produced in a limited edition of 30 to form the FMS A/W 17 Collection, are made to order in London by a high quality East End tailor; each shirt is unique, being cut from a different part of the curtain, creating new and eye-catching juxtapositions of its collaged content. 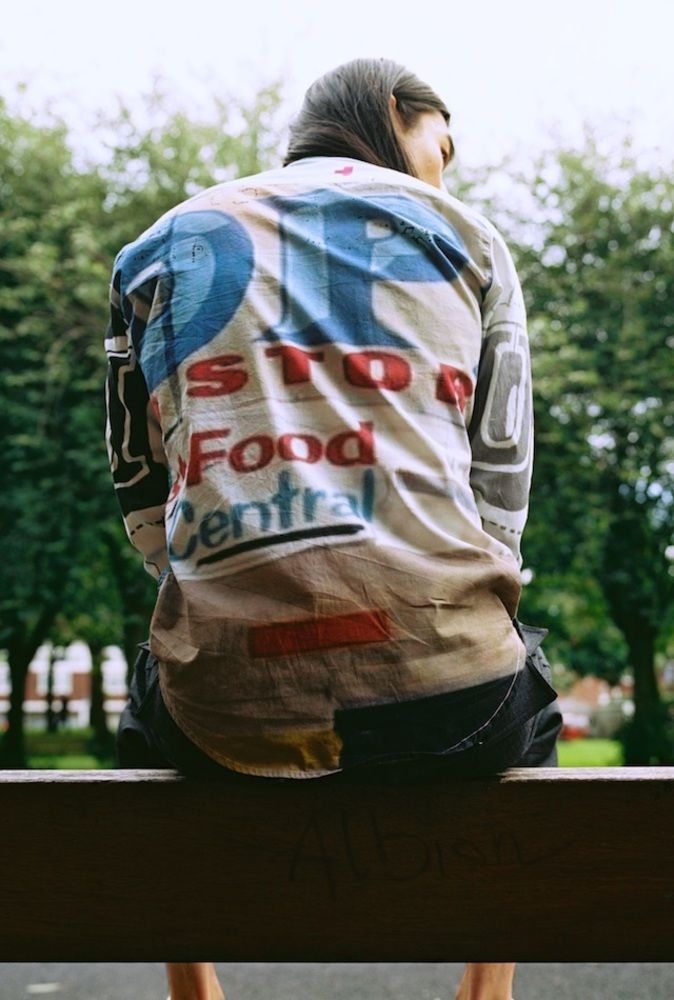 Muggeridge and his team have further repurposing projects up their sleeve for the future, using byproducts of the design and production process to create new work. “We are working on a series of limited edition publications entitled ‘Running Sheets’ that bind together running sheets from different projects into 16-page booklets,” he tells us. “This is a nod to a project we made back in 2010, ‘Designed by Fraser Muggeridge studio’: 48 new books, each unique and made up of 48 different publications designed by Fraser Muggeridge studio. This new version uses running sheets, not actual copies, so the page size can be uniform, and the crop and cut exposes graphic registration marks and colour bars.” The studio are also gearing up for their next foray into apparel design, Foot Print: “a collection of graphic socks, for which we have used our feet to create graphic forms that are woven into the socks.” 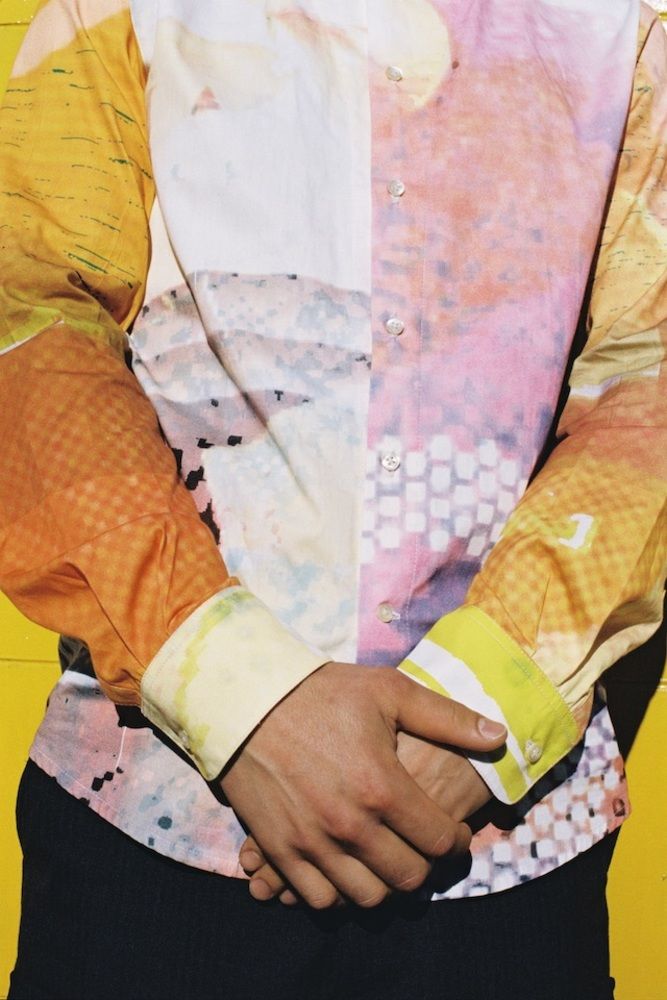 Designed by Fraser Muggeridge
Cut and construction by Sophie Hawkins 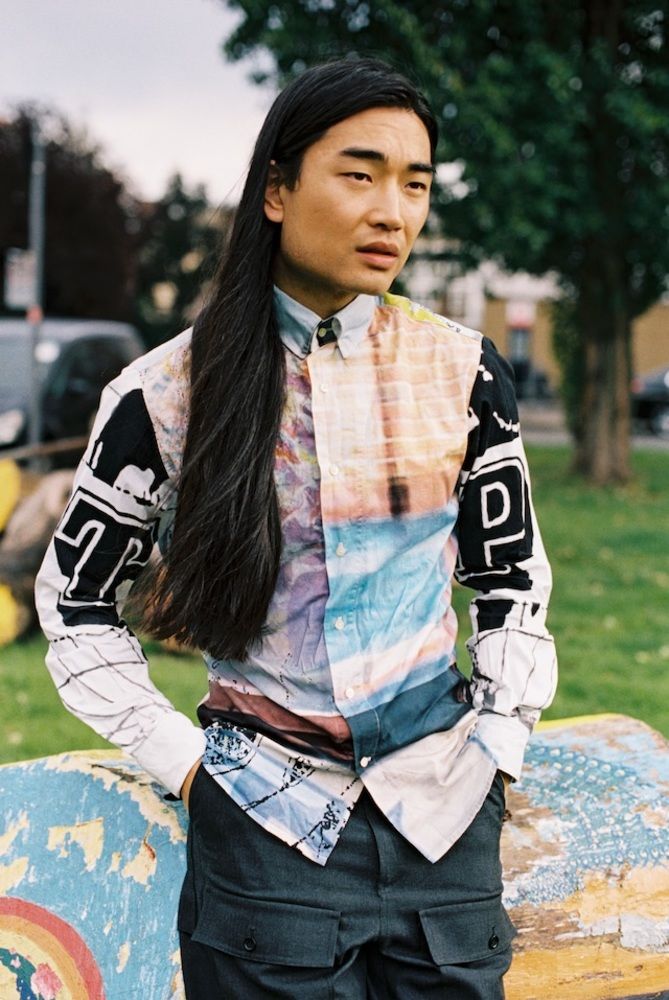