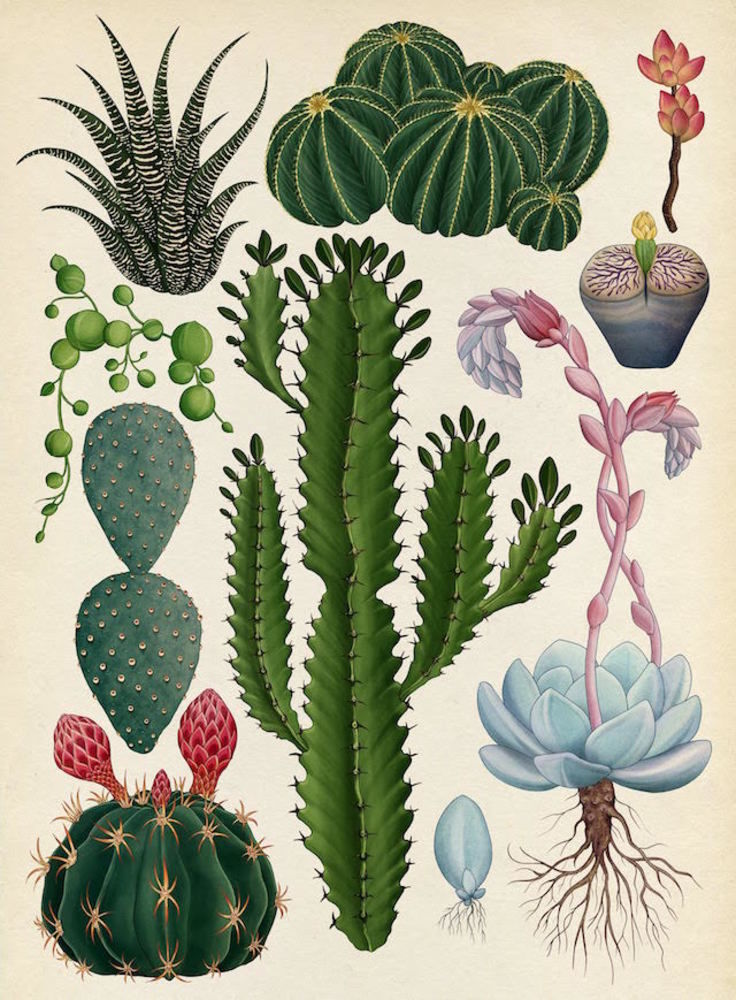 How did the project come about—when did you first start working with Big Picture Press?
I started working with Big Picture Press in 2013 when they approached me about making an animal book. After that project, Animalium, was complete, it seemed like the natural progression to follow it up with a botanical book. Just as we started to plan Botanicum, the editors met with Kew’s publishers and they got on board, along with Kathy Willis, the Director of Science at Kew. It all fell into place really nicely, with one thing leading to the next.
What attracted you to the project?
Well, plants have always been the main fascination for me. I loved working on the animal book, but this one felt much more inspirational. I’m drawn to plants in a different way. I remember Kathy joking that it’s because plants don’t run away when you get close, and I think there’s something true to that. Plants offer a level of curiosity that I find appealing—you can really study them, up close. I hugely enjoyed the process of getting a new selection of plants to draw and investigating the forms, structures and patterns. 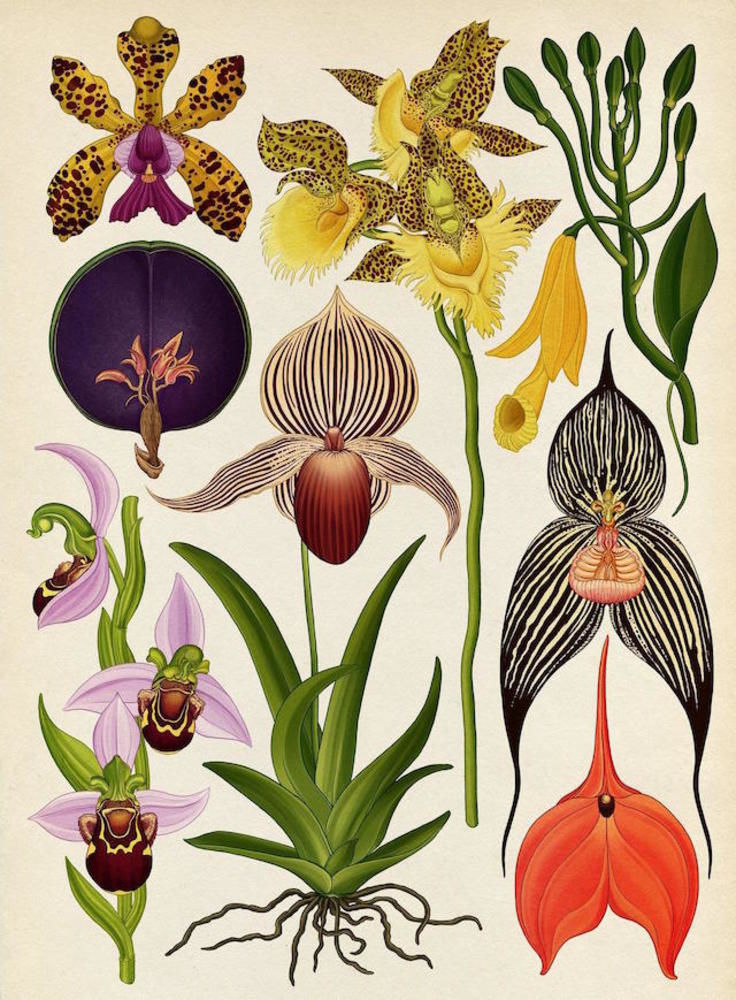 What was the brief, and did it change at all during the process?
It didn’t change very much at all, I guess because it was following in the footsteps of Animalium, so the template of what the book should be was already there. With Animalium, I was quite involved in establishing the feel and design of the book. We wanted to create a cross-over kids book, something that adults would like as much as the children, and I think in the case of Botanicum, probably even more so.
How did the structure of the book develop, and how closely did you work with the author?
The book developed very nicely, starting by working with the editor and researchers on designing the overall structure, and how we were going to divide up the plant kingdom. With plants, that's quite tricky I believe, so Kew were also involved with that stage. Then, each page either Kathy, Katie (the editor), or I would choose which plants to include. We each were coming from a different perspective, and I think that helped to curate the plants with a lot of diversity. I chose plants and fungi that I found most interesting visually, whilst Kathy and Katie made sure the most scientifically important or culturally significant were included. That way, the book shows off the most beautiful, strange and interesting selection. 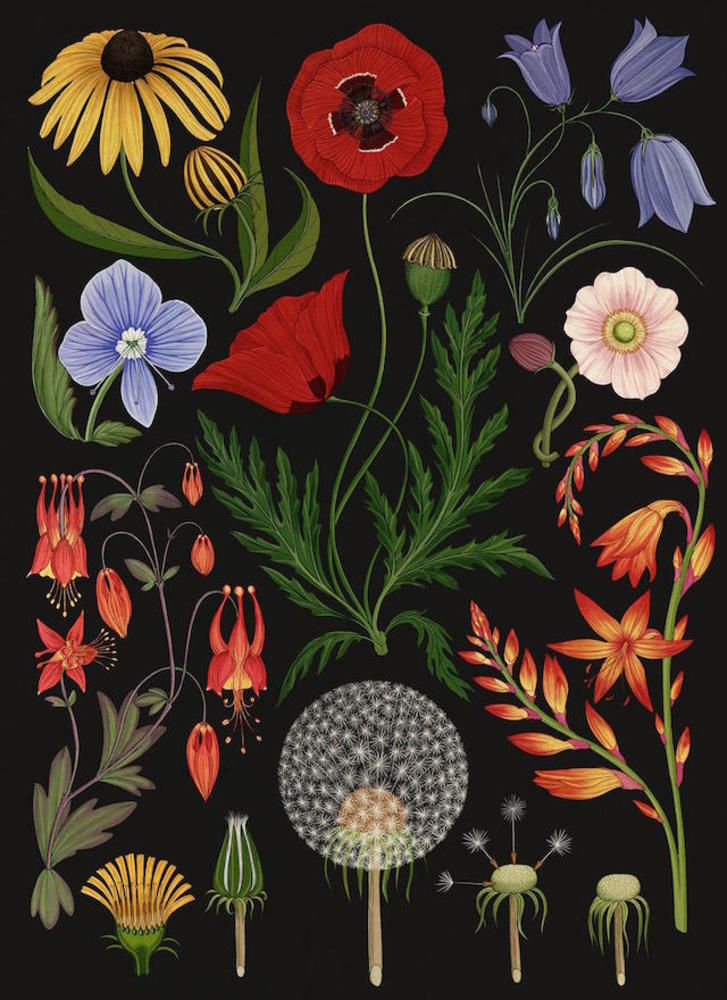 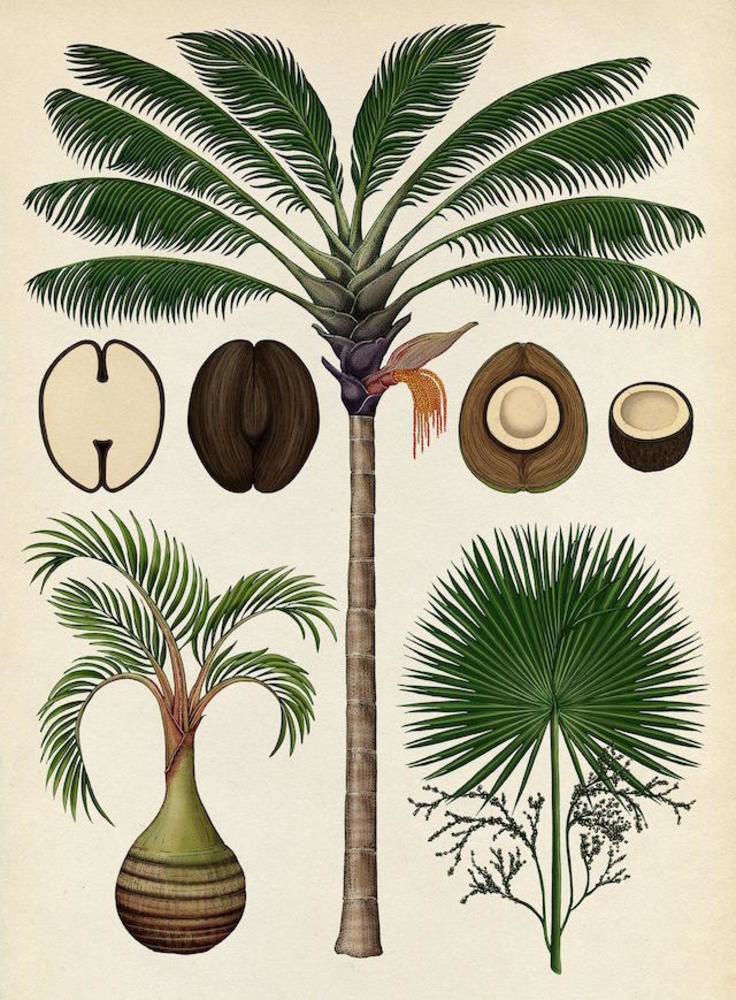 Where did you look for inspiration? Did you spend time at Kew as part of the design process?
Yes! I spent lots of time at Kew, using both the gardens themselves for inspiration (including the backstage nurseries, which are great!) and the Herbarium and incredible image archive. It’s not just the plants themselves that I find inspiring, but lots of scientific botanical art—the cross sections and diagrams that reveal the inner workings. Early on in the process I met with the archivist there, who showed me the most amazing and oldest prints they have in the collection. We looked at everything from medieval handwritten manuscripts to 19th Century botanical watercolours. It was one of the most inspiring afternoons I’ve ever had.

What were the particular design and technical challenges, and how did you overcome them?
I was very concerned about the habitat pages, and put them off until last. I tend not to draw things overlapping very often—no backgrounds or scenes. It’s not just that I’m unused to it, but also my kind of mad way of colouring in Photoshop makes it complicated. It took a few goes, and there are some dire first drafts that I keep in a vault. But i like the final result, particularly the Rainforest page. It’s good to be challenged in a big project like this. 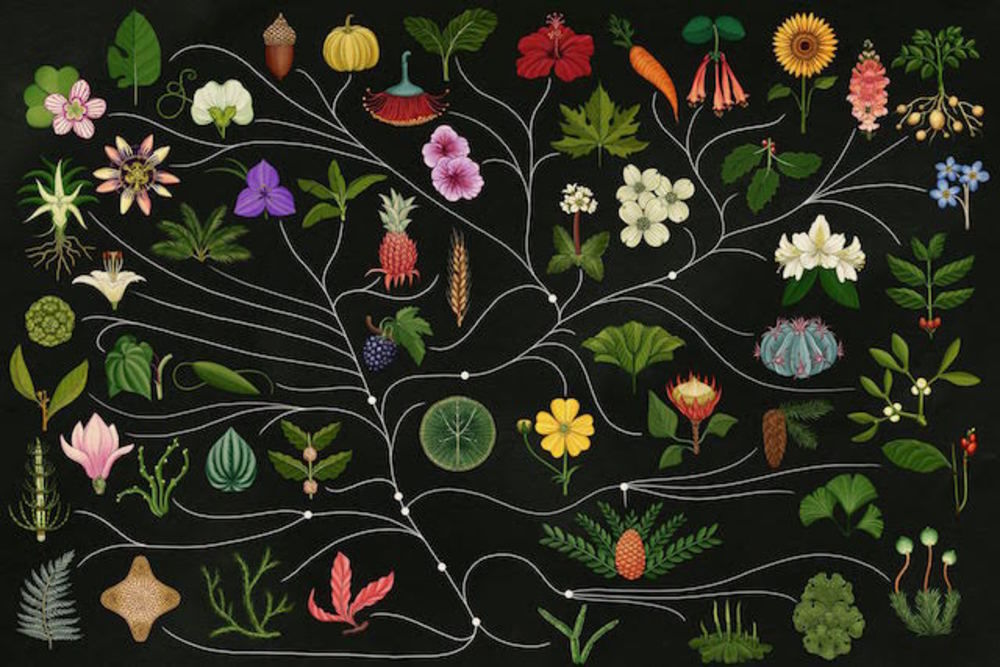 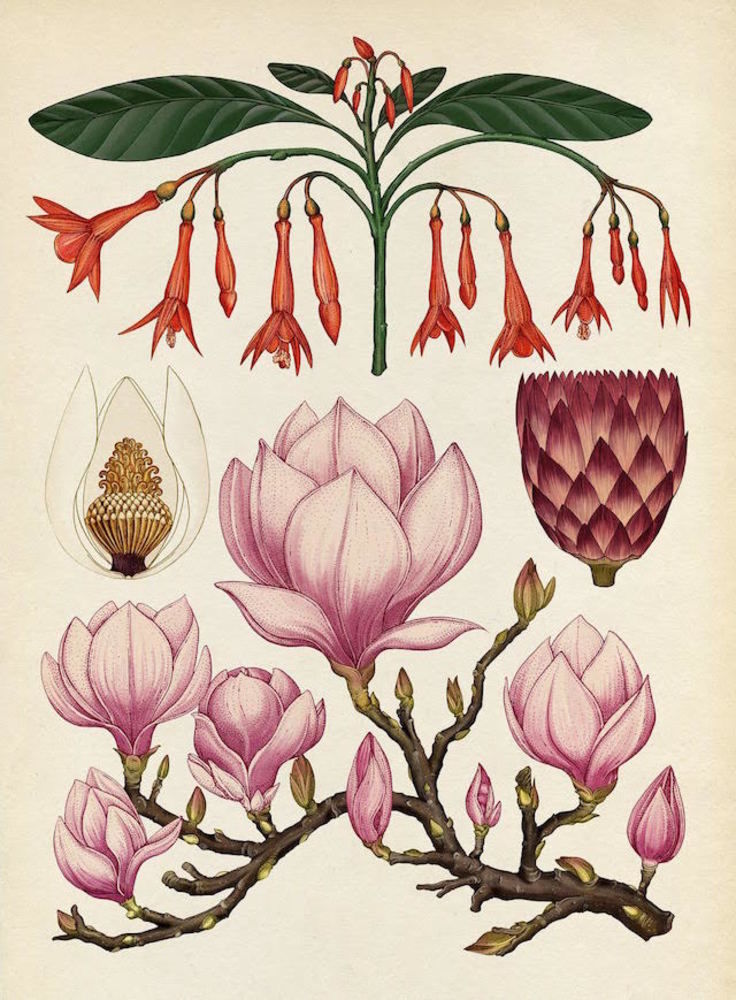 Which part of the project do you think worked particularly well?
I think the Tree of Plant Life was a great success. I could still look at it for ages, it’s mind boggling where some of the species branch off and really shows you how complex the plant kingdom is. I also don’t know of another diagram that shows you that information in a simplified way like we have done. Charts like that are often meant for scientists I guess, so they’re not usually aesthetically led.

What are you working on next?
Now I’m working on an animation! At last. It’s something I’ve been threatening to do for years, and finally the right opportunity came along, so I can take the time to do it. It’s very exciting. I’m still storyboarding currently but I can’t wait to see where it goes. I’m going to have to do a few overlapping images like that Botanicum rainforest scene, so it’s a good job I worked out how to do it back then! 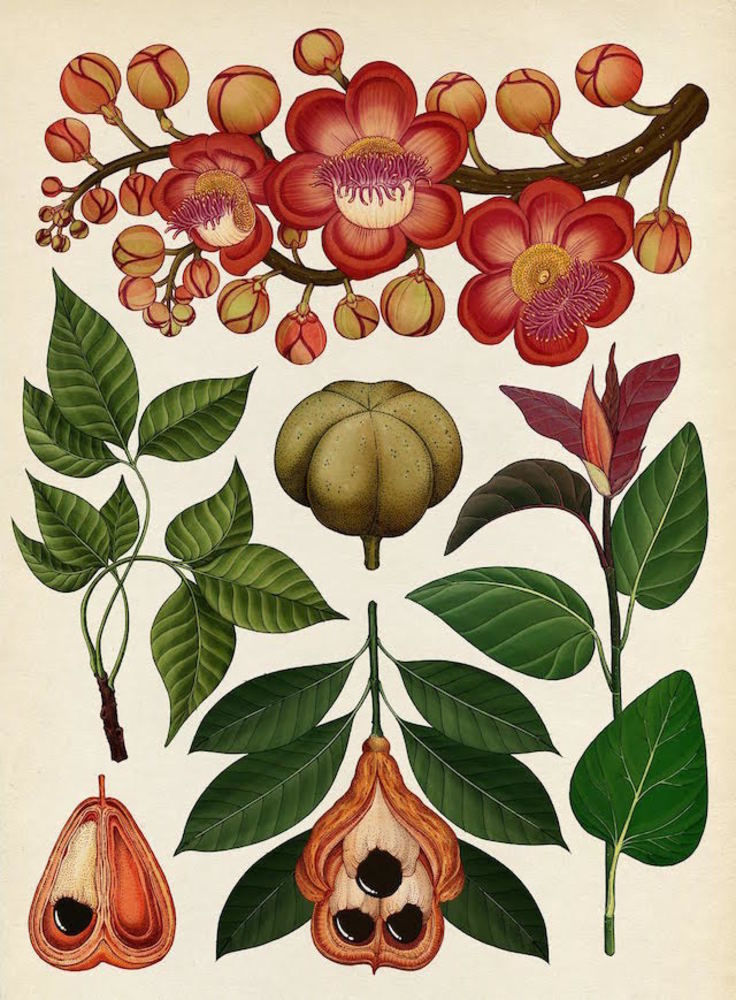 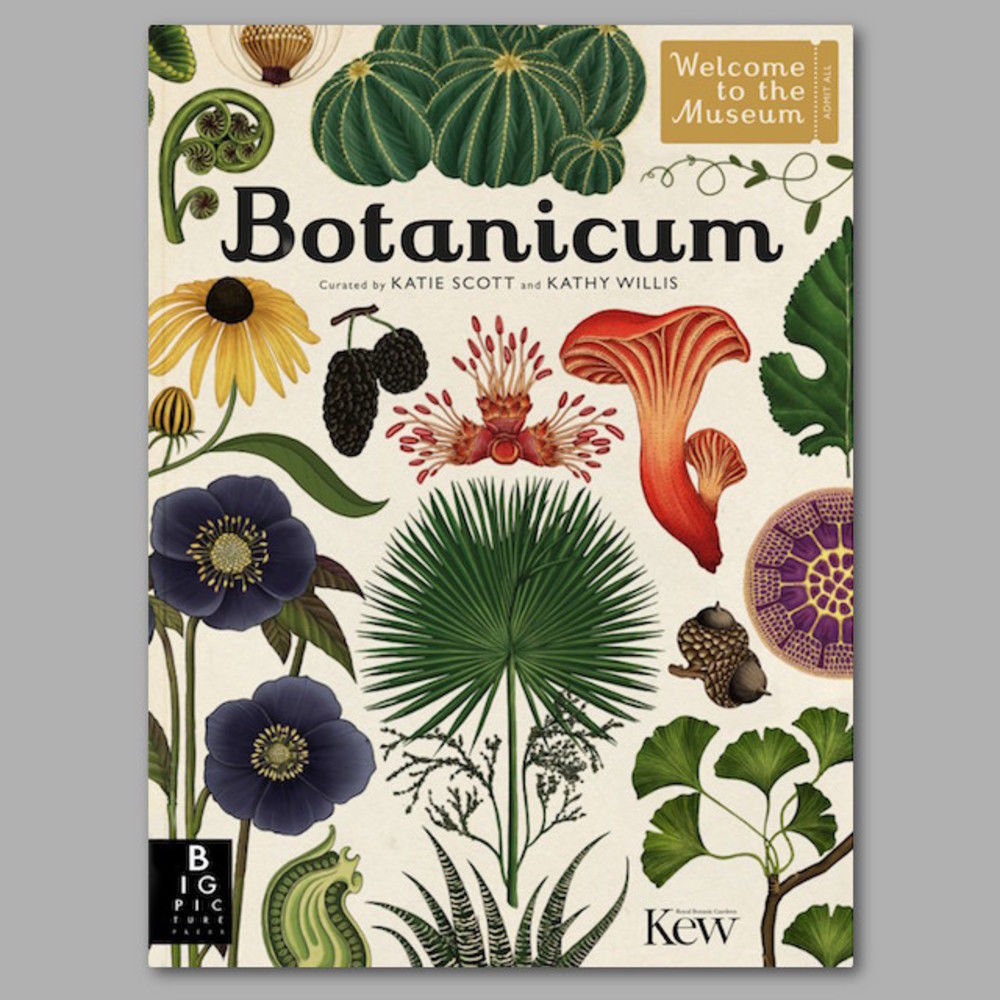 You can see more of Katie's beautiful work, including Botanicum, Animalium and her other books, on her website. Copies of the book can be purchased from Kew Gardens, and other major book retailers.