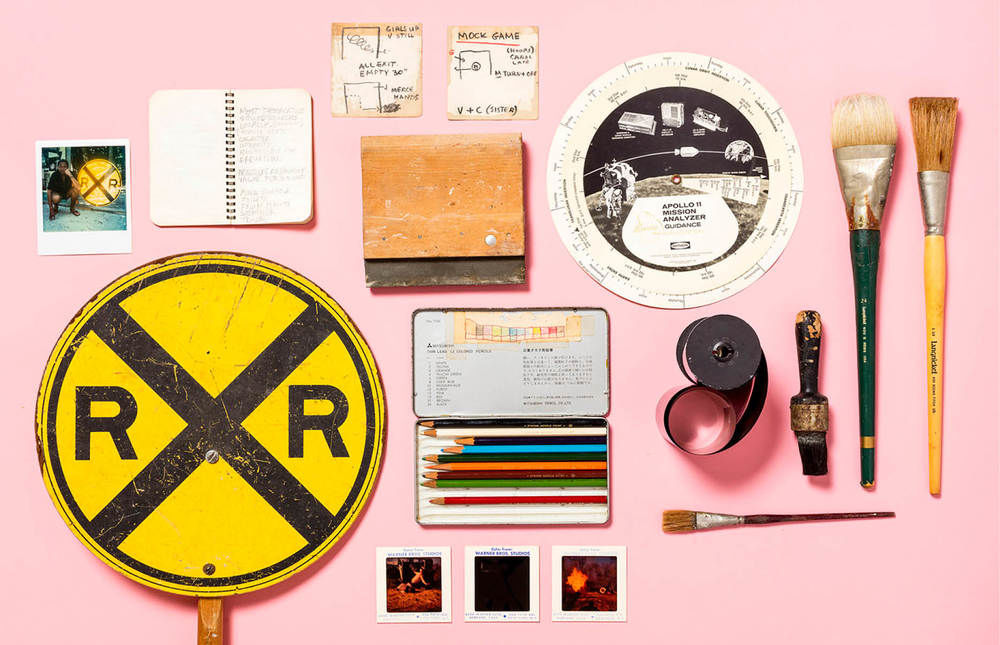 Opening on 5 May, Frieze New York returns to the city, housed in a bespoke structure overlooking the East River. Featuring over 200 galleries from around the world, the fair mixes the biggest names from the contemporary art world, alongside a selection of the hottest hand-picked new talent.

Designed by Amy Preston and Joe Cole Porter, the campaign to promote this year's fair celebrates some of the most influential 20th Century artists who lived and worked in New York. These include Robert Rauschenberg, Donald Judd and Keith Haring, all of whom had studios in the middle of Soho (and which now house their respective foundations). The campaign was shot by photographer Nicholas Calcott, and each piece in the series represents the artists using a carefully curated collection of objects from their studio archive. The series was produced in collaboration with the Josef and Anni Albers Foundation, Calder Foundation, Helen Frankenthaler Foundation, the Keith Haring Foundation, Judd Foundation, the Noguchi Museum, Pollock-Krasner House and Study Center, and Robert Rauschenberg Foundation.

It's a fascinating collection of images, displaying objects which the artists have collected as well as various possessions and tools, all of which give a glimpse into their lives and working practices. Each piece has a background colour which relates to the individual artist eg turquoise for Donald Judd, and green for Alexander Calder. 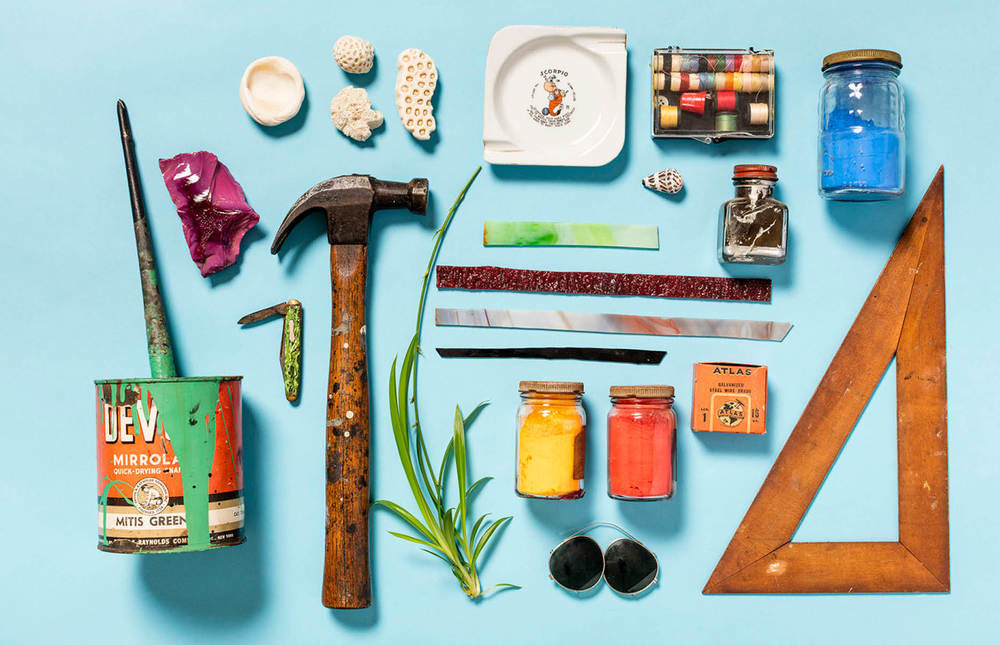 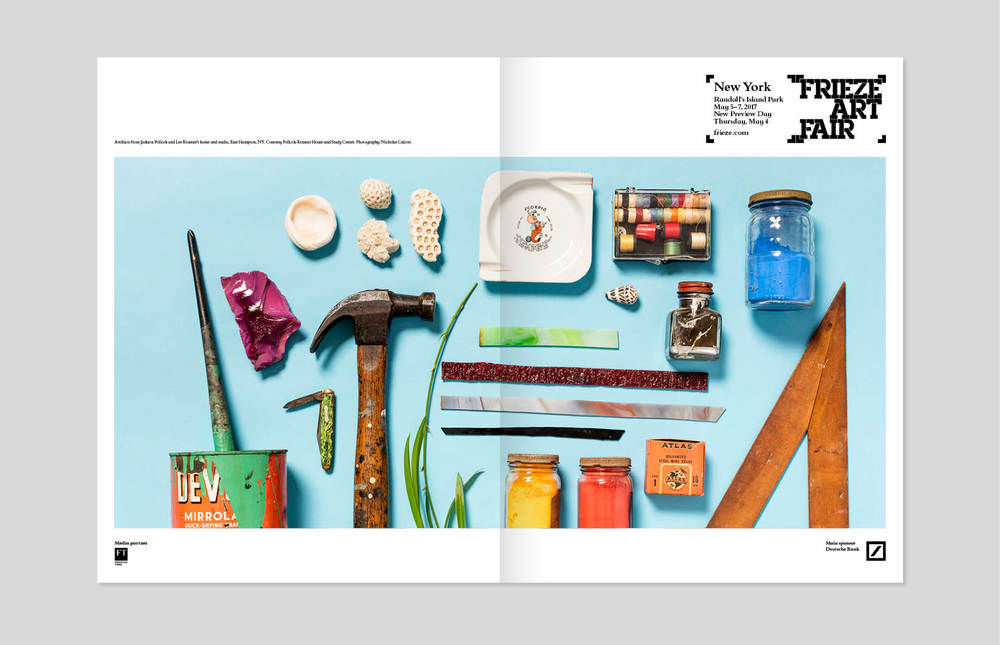 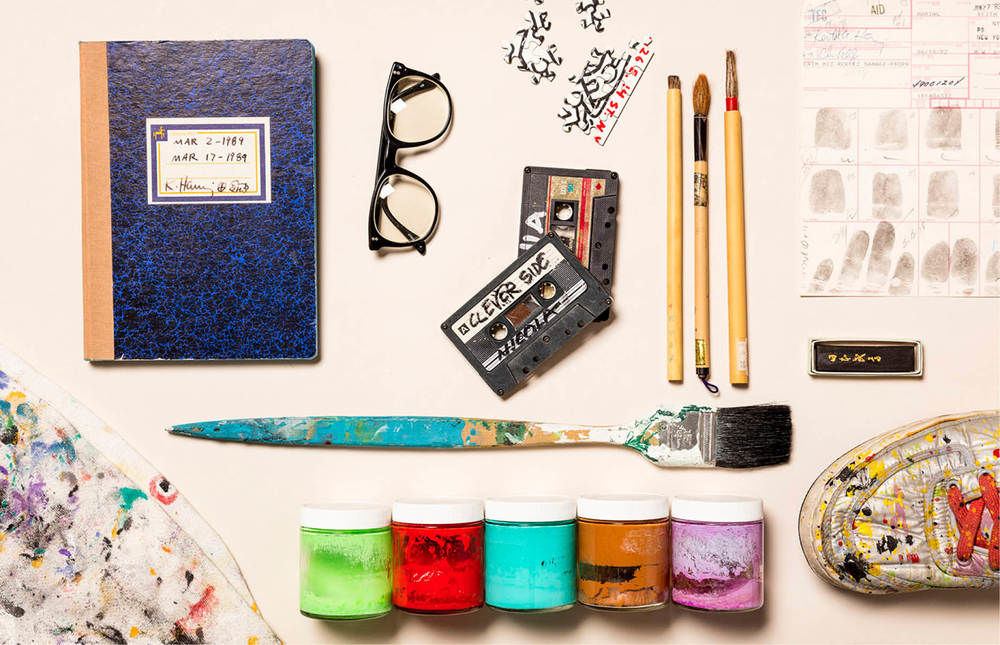 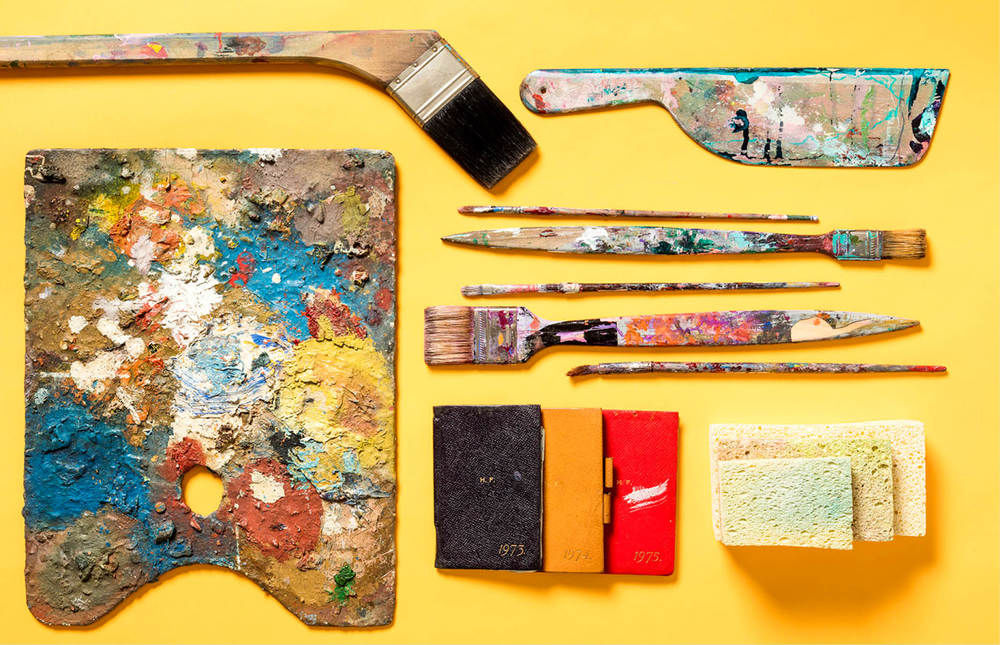 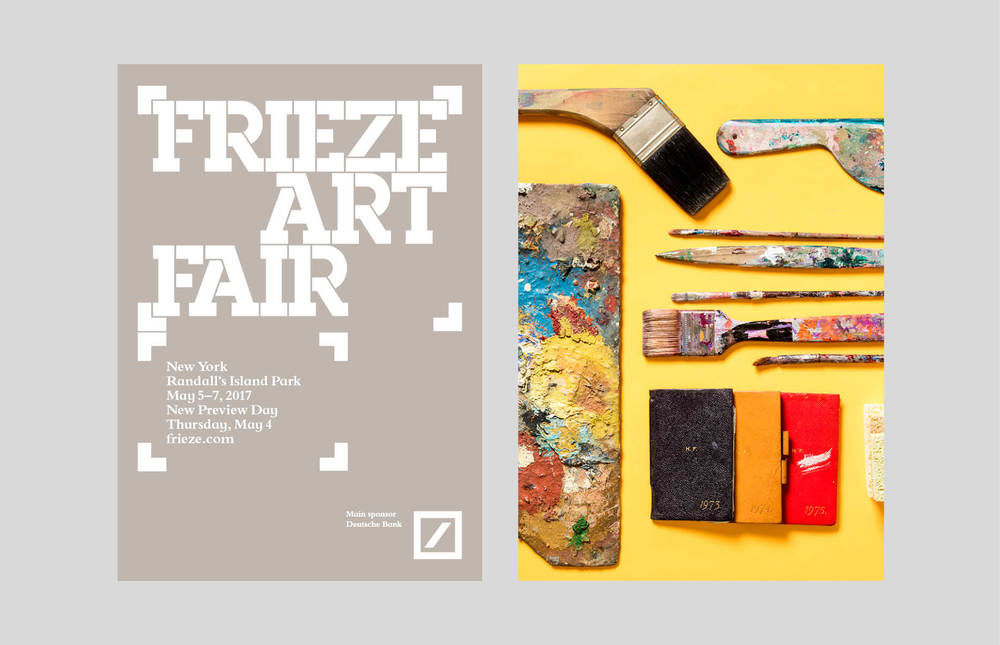 How did the project first come about?
For each Frieze art fair (London & New York) we create an image-based advertising campaign to celebrate the city in some way. New York is rich with artistic legacy. Walking around Soho today you can find the studios of Haring, Rauschenberg and Judd. Our first idea was to photograph these spaces and capture their working environments, whether that was paint splashes on the floor or the view from their windows.

After initial research, we also discovered that these foundations not only maintain the work of the artists but also look after their personal archives of items including tools, art materials, souvenirs from travels, personal belongings and ephemera. Working with photographer Nicholas Calcott, we decided to create a portrait of the artist through these emblematic objects. The arrangements of the objects were composed into still lifes on coloured backdrops to reflect the artists involved.

Were all the archives you approached keen to take part? Were there any which had reservations?
The foundations all have different missions to maintain and preserve their artist's work and whilst a few are open to the public the rest have private archives. It was essential that we worked very closely with the archivists to ensure that the objects curated were a balanced representation of the artist. This process was very collaborative with us all gathered around the materials trying out different compositions until we had the perfect representational 'still life'.

Were there any objects which you weren’t allowed to show for any reason?
We chose not to show actual works of art within the images. We thought it would be a fun 'guessing game' for the art-educated audience the images are promoted to. For the same reason, we tried to avoid anything that might include the artist’s name or signature.

What was the most surprising object which came to light?
One of our favourite objects is Lee Krasner’s spider plant that is still thriving. Visitors to the house of Pollock and Krasner (which is open to the public) can take away an offshoot of the very same plant as a souvenir, in the same way that Lee Krasner used to give out as a gift to guests.

What’s been the reaction to the campaign?
The reaction has been very positive. We think an art-loving audience appreciate the insight these images give into the working practice of these well-known artists. There is something quite personal about seeing Judd’s glasses or Haring's paint-splattered Nike trainers.

What’s next for you?

Amy: I am now focusing on the campaigns for the London fairs in October. For Frieze Masters, we are featuring beautifully patterned floors from paintings within the National Gallery’s collection. For Frieze London, we are producing a series of architectural photographs including floors at the Tate Britain (designed by Caruso St John) and John Hoyland’s studio which is covered in layers of coloured paint. Alongside the art direction I do for Frieze, I’m working on a branding and signage project for Studio Toogood and graphics for an exhibition at the Royal Festival Hall curated by Antony Gormley.

Joe: After nearly four years at Frieze I've moved on and just set up my independent studio. I'm currently working on a design project with the director Bruno Wollheim for the David Hockney documentary, A Bigger Picture, that will tie in with Hockney's birthday on 9 July. 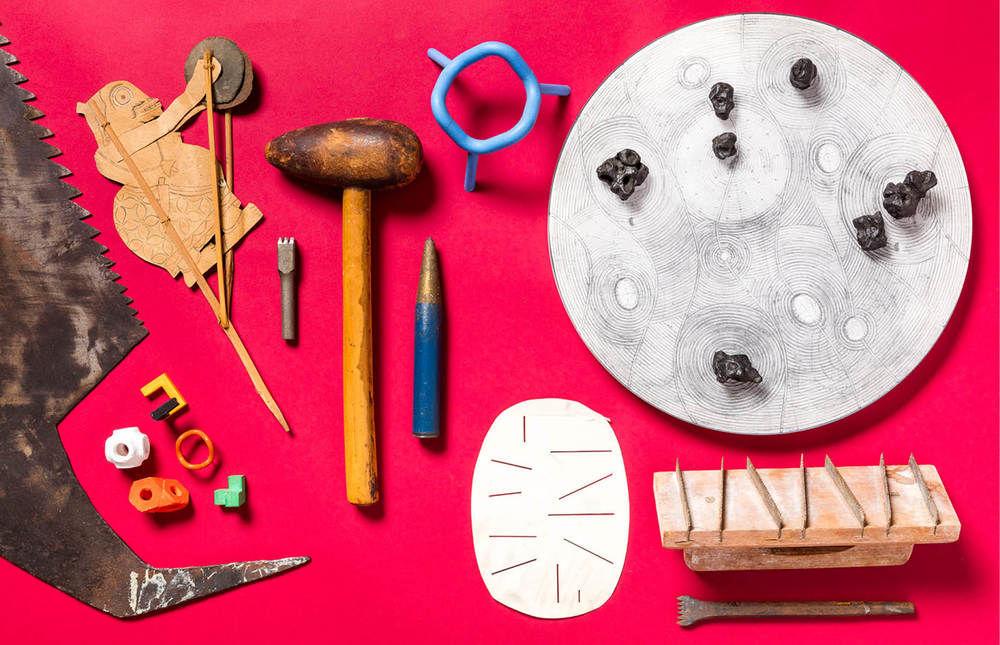 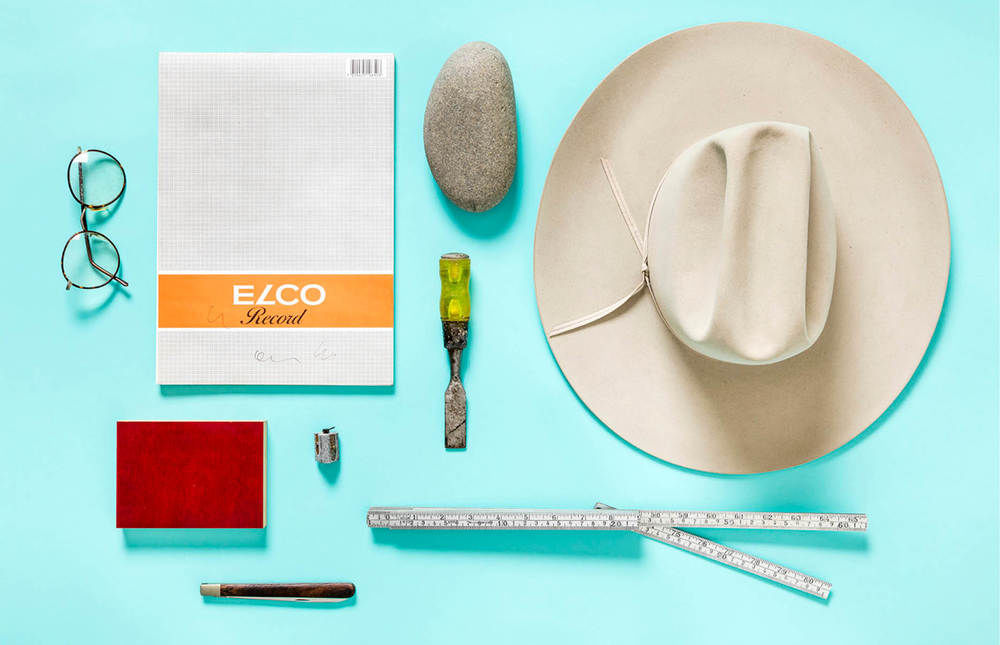 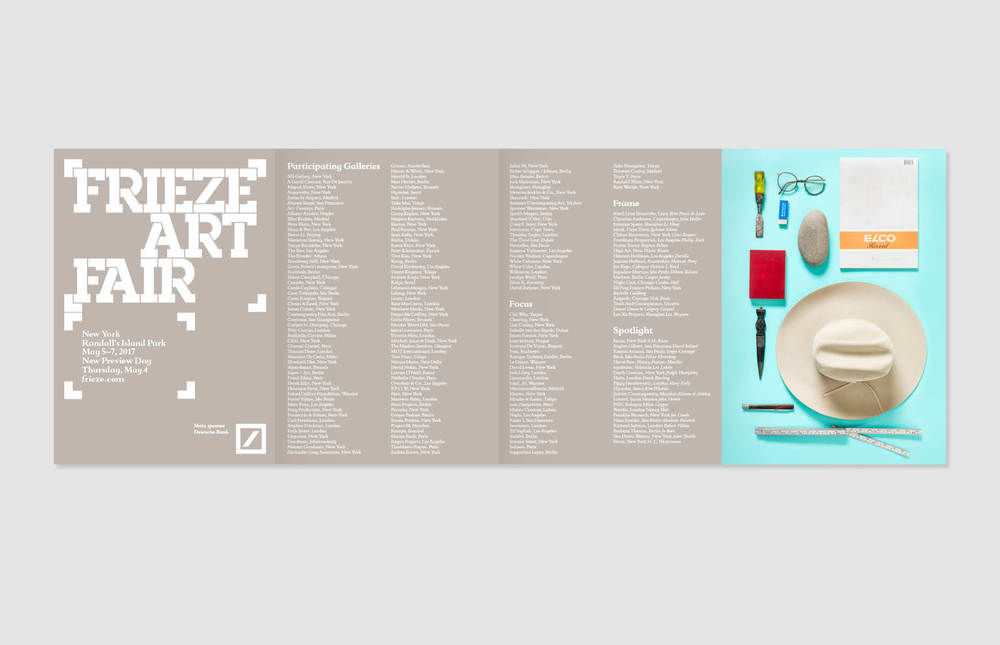 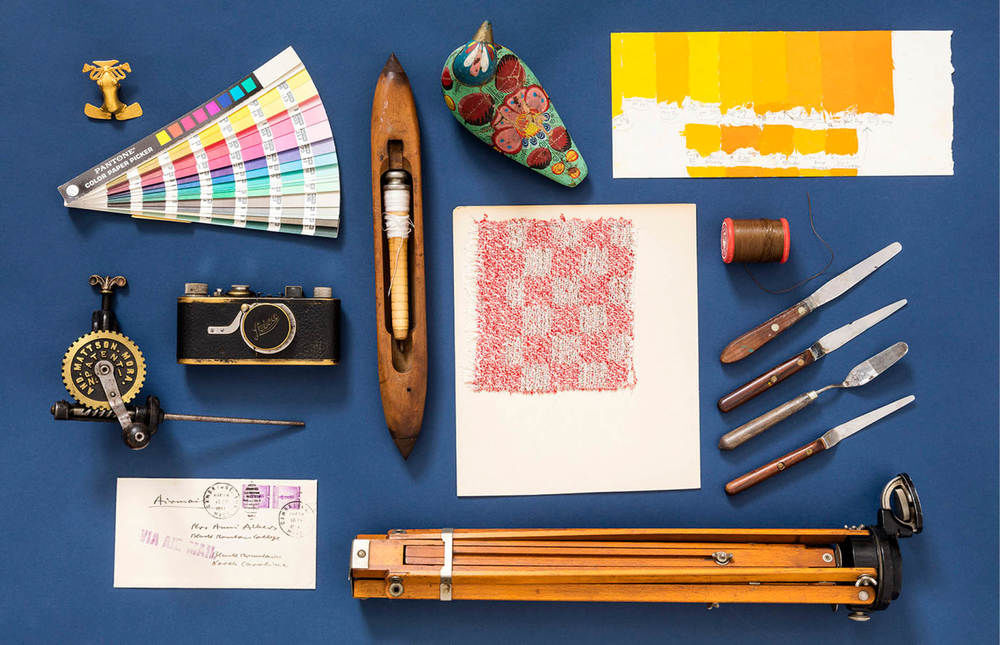