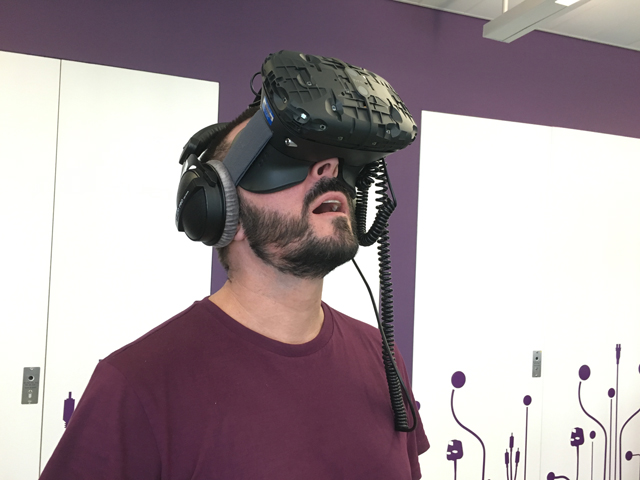 Some of you will remember The Lawnmower Man, an early nineties sci-fi film in which James Bond experiments on his gardener with virtual reality. It wasn’t very good. Like Tron before it, the film left me feeling unimpressed with ‘VR’. It was cold, unrealistic and just daft looking. My ambivalence increased in the early noughties with the rise of virtual-world online gaming. The most popular of these was Second Life where users would socialise in nightclubs with rubberised perverts, and buy pixelated adidas with imaginary currency. Again, unimpressed. So until VR either dramatically improved or disappeared all together, I would remain cosy in my ignorance.

Cut to this week. Alex Nelson, a colleague in BBC Digital, (R&D), invited me to try some of the latest VR kit. I’d heard good things from colleagues so I went along hoping to experience some next level shiz whilst simultaneously managing my expectations big time. It’ll probably be a bit rubbish, I thought.

I arrived on the 5th floor landing of Dock House, MediaCity, Salford, to find a tall chap in de rigueur VR headset with gamer wands in each hand. I gave a pitying smile as he waved his arms around like a gormless stoner in the aforementioned nightclub, mouth open, gazing skyward. Alex arrived. He delicately touched the tall chap on his arm, being careful not to crash his trip resulting in some irreversible cyber downer, or something. “Aaand, you’re back in the room”. We were introduced. This was Si Lumb, BBC Digital’s resident gamer nut. He’d be demoing the kit for me. Ok, let’s do this.

Within minutes I was kitted-up and ready to go. Two sensors, mounted on tall tripod thingies, pointed at me from opposite corners of what would be my ‘environment’. The system was booted-up and within seconds I was waving my wands, magically painting trails of coloured light which I could then walk around and inspect from any angle. This prompted my first “Woah”. Next I’m sent into outer space to observe the moon up-close. Then to a cartooney office where I can throw stationery around with my bare Mickey Mouse hands. (I hid a doughnut in a filing cabinet. Rock. And. Roll). Si then teleports me to a Death Star-like facility. I’m physically walking around, ducking girders, opening doors, tip-toeing along gantries high above bubbling lava pits. I LOL nervously. I don’t like heights. I must’ve looked like a right div, but my cares and questions were gone. I was immersed, astonished, having fun. Once back in actual reality I felt like I’d been away. Like I’d returned from somewhere else. Weird. This was a turning point. Virtual Reality is evidently now good, if still a bit daft.

VR hard and software are verging on affordable mass consumption. It won’t be long before this new ‘new’ becomes the new norm. We’ll all be disappearing to work and play. Where we go from there, who knows. For now though, our next cultural update has begun loading. It’s gonna be real.

…spent eight years at Sheffield's finest The Designers Republic before setting up his agency Kiosk in 2005. In 2013, he was snapped up by one of Kiosk's clients, joining the BBC's UX&D team as Creative Director. This involves overseeing the BBC's Global Experience Language (GEL), and maintaining and developing the look and feel of the corporation's entire online output.

…is usually associated with the entertainment industry, but it is also used for training purposes across many different fields. These include the military, where personnel can experience virtual combat situations or learn to drive virtual tanks; and in medicine, where surgeons can practice virtual operations. VR has also been proved to be an effective tool for teaching children how to cross the road, although it still has some way to go before eclipsing Dave Prowse's legendary Green Cross Code campaign, which it's estimated prevented 250,000 children from harm on Britain's roads.