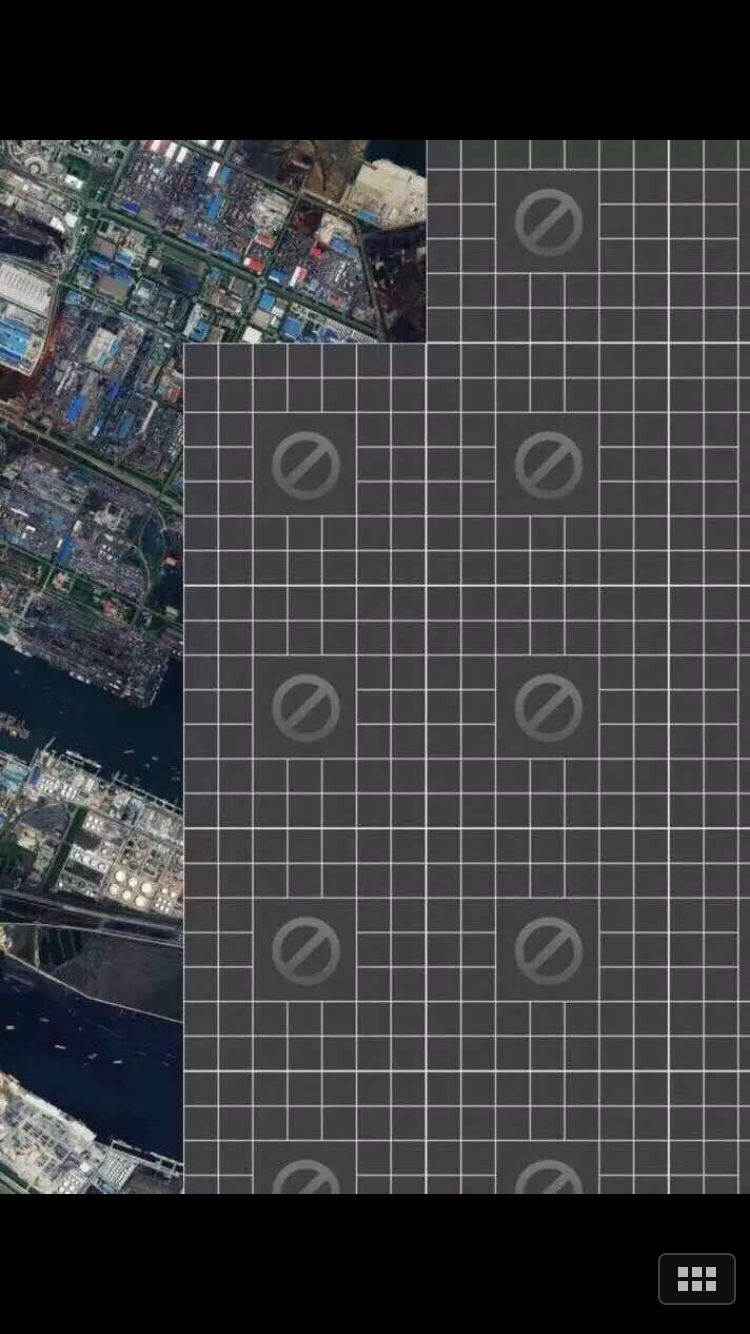 This month, on the evening 12 August, a series of deadly explosions went off at a chemical warehouse in the port of Tianjin, China. The destruction shocked China's population with its scale. Over a week after the incident, the area has been, and still is, virtually closed. When navigating satellite images of the blast site on China's main online mapping service, Baidu maps, the act of zooming closer into the zone is interfered with by a barrier of empty squares. The message is clear: the site is off limits. A thick vertical line of grey tiles shutter over the satellite-captured terrain.

The strict regulations concerning media coverage of the event also applied to web content which might disrupt social order, incite panic or allow for the spread of rumors. It was peculiar to see the immediate blocking of the zone on Baidu maps as it would have been unlikely that the area's satellite images were freshly updated right after the disaster – online maps are only typically updated two to three months after the photograph is taken. But maybe the images of the area pre-disaster carry the most threatening potential. They would promise a clear pictorial representation that could expose the organization of the space prior to the blast, providing netizens with images to navigate, investigate, and extrapolate in whichever way they want.

Online maps are infamous for acting as neutral representations of our physical reality when they are in actuality infused with geopolitical conditions. Blurred forms, camouflaged buildings, dated imagery and permanently pixelated areas form the various aesthetics of censorship which are used in relation to commercial, political and military intentions; the opaque squares of grey over Tianjin are a more obvious form of it.

In China, the same rules of law which apply to the physical, apply to its virtual terrain. Official internet authority titles like 'the cyberspace administrator' and terms such as 'internet sovereignty' are very much part of the national vocabulary used within its borders. A whole new virtual reality has grown in parallel to, and in direct confrontation with, the Western understanding of the Internet. Something described in this passage from Min Jiang’s book Authoritarian Informationalism: China’s Approach to Internet Sovereignty:

"[Hillary] Clinton’s call to build ‘a single Internet where all of humanity has equal access to knowledge and ideas’ certainly appeals to freedom seekers around the world. Beijing’s view of the Internet, on the other hand, is fundamentally a utilitarian one, viewing it as ‘useful and conducive to economic and social development.’ Rather than placing emphasis on the Internet as an extension of individual freedom and a marketplace of ideas, Beijing stresses its importance in driving China’s economy and raising people’s living standards."

It is with this screenshot of Tianjin's offline squares that we see the potential power of visibility – and the power equally manifest in invisibility. By looking at and questioning images such as this, we might find clues as to what kind of regimes around the world keep tight control over their public image and to what purpose: perhaps through the pixelated terrain might seep a clearer image of these governments.

…is a research-led graphic designer based in Beijing who will be joining the Research Architecture MA in Goldsmiths this autumn. She is the co-founder and designer for Concrete Flux, primarily a journal on urban spaces in China, and has just completed six months working with Metahaven.

...is a metropolis in northern China and one of the five national central cities of the People's Republic of China; it’s under the direct administration of the central government. As of the end of 2013, its population had reached 14.72 million – almost five times that of the whole of Wales.