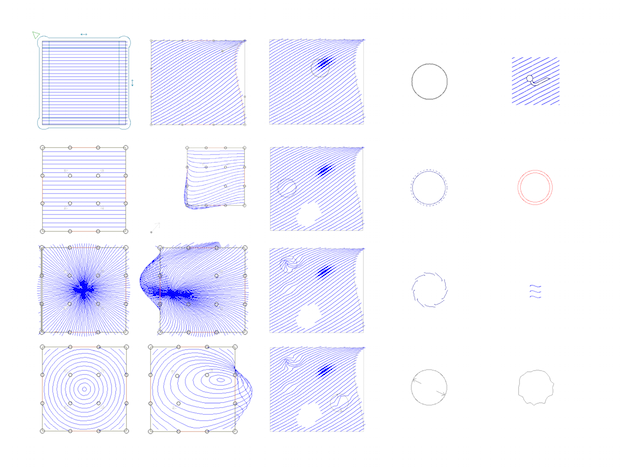 Our description of the first encounter we had with Tom Lechner would probably be similar to what any of the two hundred people would say who sat in the audience of the Libre Graphics Meeting in Brussels back in May 2010. The Libre Graphics Meeting is an annual gathering for users and developers of Free, Libre and Open Source graphic design software. Looking back at the archive, there is a great cheer when Tom progressively peeled, like an orange, the image he was stretching over a dodecahedron, demonstrating the way Laidout could be used to prepare the file to print such a shape.

Tom has as many facets as he has obsessions for different mathematical and geometrical schemes. After two and a half years at Caltech, where he spent a lot more time making artwork than finishing homework, he "moved to Portland to attend an art school and then continued on to make artwork and open source computer art tools, narrowly avoiding starving to death in abject misery under the weight of student loans."

Laidout started as an imposition tool used by Tom to print his comics. Over time more intricate functionalities were added such as the aforementioned possibility to work image imposition onto 3D objects, or the addition of drawing tools. As Tom developed his own Graphical User Interface Toolkit for Laidout, the software comes with a personal ‘voice’. It feels like a very intimate tool full of hidden menus and shortcuts. With every new version its exciting to see the added features and how they all come with their own approach and interface. Laidout appears to be like any other tool at first glance, but when you take a closer look, or see one of the screencasts on Youtube, you understand that Laidout has its own approach — which is really refreshing in a landscape where so many tools are alike.

The most recent version of Laidout came with an engraving tool, a utility that turns an image into a line drawing. For the latest program of La Balsamine, a Brussels theatre for which we've been designing the identity for some years now, the co-directors invited us to work with engraving and engraving patterns. We decided to experiment on digital patterns and lines, digging to find different ways to (re)draw images. Last year, at the Leipzig edition of the Libre Graphics Meeting, we were treated to yet another wonderful presentation of Laidout's new tool (called mesh conceptions). We fantasised over a similar tool which could ‘engrave’ images with the same fluidity and magic. A different approach exists in Inkscape (arguably the main vector editor in the libre graphics world), but which is more manual and much less granular than what we wanted to achieve. Laidout had, by then, most of the building blocks in place for what we wanted to create. This season's program for La Balsamine was the perfect opportunity to commission Tom for this next step in the tool; to be able to apply the fill tool over an existing image, a content aware overlay, of sorts.

It is this relationship that we thought could be interesting to portray here; this ecology of exchange between designer and developer which can only really be afforded in a working model where neither is afraid to open up their sources. This relation is at the centre of our practice, we couldn't really see any other way of working now.

This article and embedded images are published under the Free Art License 1.3; and CC-BY-SA.

…makes graphic design using only free and open source software — pieces of software that invite their users to take part in their elaboration. Founded in 2006 in the context of Brussels art organisation Constant, OSP now comprises a group of individuals from different background and practices: typography, graphic design, cartography, programming, mathematics, writing, performance. It has won both the Most Beautiful Book of Flanders award and the Most Beautiful Book of Brussels/Wallonia award. True to their name, OSP publishes all the source files to its projects through its website.

…is a burgeoning community of apps that not only allow you to not only avoid the expense of the Adobe catalogue, but to often contribute to the development of the app itself through Open Source licensing. Some of the most popular are Inkscape, which could be seen as something of an Illustrator alternative, digital painting tool Krita, 2D animation app Blender and online font design program Glyphr.