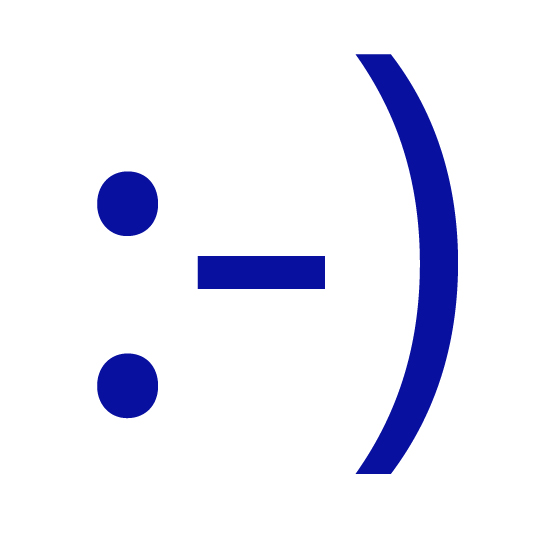 I started out hating smileys. I used to get annoyed with anyone who used smileys in text messages and especially in emails. Why would you introduce something so silly to a serious exchange? But slowly, I saw myself getting addicted to this nonverbal form of communication.

I still think there should be some sort of etiquette for using them and overuse can still annoy me, but I have found myself using occasional smileys even in client emails. It’s a shock to my old emoticon-hating self, but sometimes it just lightens the whole tone or expresses the end of a good collaboration ;-)

In a digital age of quick, text-based communication, the absence of body language and prosody makes misunderstandings inevitable. The lack of facial expressions is also how the smiley first came about (sometime around 1982) on a computer science message board. Scott Fahlman, credited to be the first to write a message containing a modern emoticon, explains: “The problem was that if someone made a sarcastic remark, a few readers would fail to get the joke, and each of them would post a lengthy diatribe in response… This problem caused some of us to suggest (only half-seriously) that maybe it would be a good idea to explicitly mark posts that were not to be taken seriously. Various 'joke markers' were suggested, and in the midst of that discussion it occurred to me that the character sequence :-) would be an elegant solution – one that could be handled by the ASCII-based computer terminals of the day. So I suggested that."

“Microsoft and AOL now intercept these character strings and turn them into little pictures," Fahlman says. "Personally, I think this destroys the whimsical element of the original." I’m not sure I agree with this, as the extensive development of imaginative little yellow faces in all sorts of crazy situations has created a world of its own pictograms. Personally I miss the ignoring smiley, just a yellow circle – the smiley has simply turned it’s back to an annoying comment on Facebook or it is teasing your mum when she asks you in a text for the five-hundredth time if you have remembered to renew your insurance.

But I think you won't find many pictograms where something as stringent and dry as typographical punctuation marks have been turned into something as silly as the smiley :-)

Originally from Denmark, this graphic designer runs London-based Collective Household with George Wu. Together, their aim is to create collaboration between different creative disciplines, leading them to a diverse range of projects from publishing through to film. Gottlieb is also responsible for The Poundshop, a pop-up retail concept which commissions designers to produce affordable, design-led products.

…are the Japanese versions of smiley pictoforms, now rapidly expanding out of Japan and into global use. This is largely due to some of the character sets being incorporated into Unicode in 2010, meaning Windows Phones and iPhone could display them without a Japanese carrier. Despite the similarity to the word ‘emoticon’, the etymology is completely different – it comes from the Japanese ‘e’ (meaning picture) + ‘moji’ (meaning character). Many of the original emojis nod to their country of origin (including bowing businessmen and tradition foods like ramen noodles and onigiri) but the emoji-design community is rapidly growing internationally, indeed Brits Matt Gray and Tom Scott announced their emoji-only social network earlier this month, called Emojli.