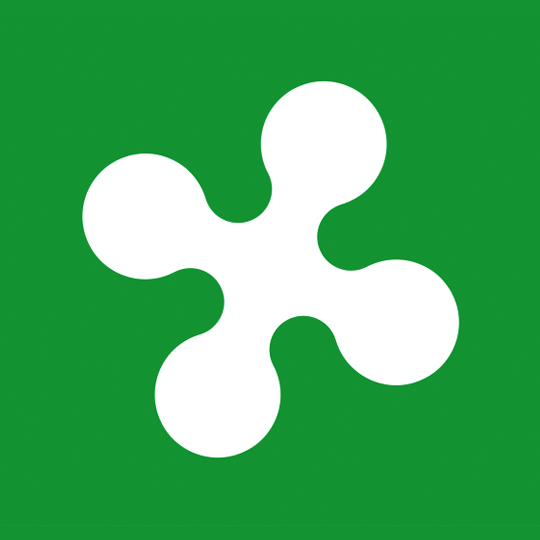 Lombardy district's official icon of the is one of the best-known identities of any Italian institution. It was conceived in 1974 by a great team of designers: Bruno Munari, Bob Noorda (Dutch by birth but primarily Milan-based), Pino Tovaglia and Roberto Sambonet.

It’s inspired by the Camunian rose, a typical plant that grows in the region. It’s also a stylised take on the ancient rock carvings found in one of Lombardy’s many valleys, that testify for the region’s millennia-spanning history. This ancient symbol consists of a meandering closed line, which winds around nine cup marks, and can be found engraved into the rock in both symmetrical and asymmetrical patterns or in a swastika-like form.

Many theories exist about the meaning of Lombardy’s icon. Perhaps it has a complex religious meaning, or is linked to astrology. It’s inscribed into a green square, which we think symbolises the Camunian rose’s colour and the huge and luxuriant greenery of Lombardy. Both the symbol and the overall identity are supervised by regional laws.

What makes this symbol special for us is its timelessness and elegant appeal. It’s a simple marque but so emphatic and representative. We also like the geometric approach to the design, which results in a symmetrical shape that still manages to be dynamic, thanks to the slight rotation.

Last but not least, it is an emblem that represents Italian graphic design at its best. It was created by a group of individuals who are like an Italian design dream team. They’re also among our favourite designers of all time. We especially admire Bruno Munari, who led the project. He contributed massively to many fields of the visual arts and, with his research on games, to didactic methods as well.

The carvings at Valcamonica, which inspired Munari and team, are part of one of the largest collections of prehistoric petroglyphs on the planet. The site, which includes more than 140,000 figures and symbols inscribed over 8,000 years, depicts scenes of war, hunting, magic and agriculture, as well as the Camunian Rose. It was award UNESCO World Heritage status in 1979, making it the first site in Italy to be recognised by the body, even before Pompei and the historic centre of Rome.

La Tigre – not to be confused with the early-noughties electroclash band Le Tigre – are Milan-based designers Luisa Milani and Walter Molteni. Their love of abstract geometric forms and their Memphis Group-inspired palette has won many fans in UK clients, not least designer Matt Willey, who enlisted the duo to update The Independent’s famous eagle logo and create pictograms for the recently redesigned RIBA Journal. Other clients include The Guardian, The New York Times and Wired.