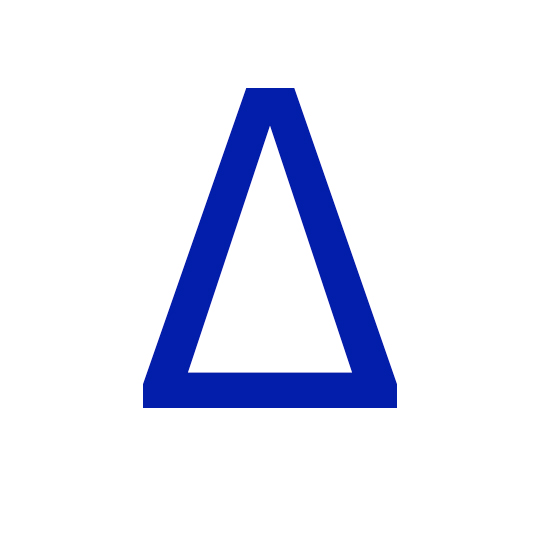 It’s nice, and I think quite fitting, to have a symbol representing a band – I’m not sure who did this first, maybe Prince? This approach is often problematic though, a case in question being the Leeds indie rock band which officially goes under than name of ∆. Instead of the symbol itself, the band’s name is generally written as the keyboard command for it – ‘alt-J’ — which seems to completely miss the point. The symbol exists as a special character in most typefaces, it comes in various weights, and its character changes depending on the font being used. And as it’s already imbedded within desktop publishing, surely it’s the symbol that should always be used when referring to the band, and not the keyboard command?

It’s rather a shame that striking the keyboard command alt-J results not in a beautiful equilateral triangle, but in a slightly awkward isosceles triangle, aka the delta. The delta is the fourth letter of the Greek alphabet, and somewhat ironically, this three-sided shape also holds a numerical value of 4. In mathematics it denotes change, or any changeable quantity.

I think that a more alternative approach is needed. If a symbol can be synonymous with the word Nike (although God knows how many adverts we must have seen to make this an instant association), then surely an alternative band can play the game on their own terms and eliminate the written format in favour of the symbol? See the symbol, say the name – hear the name, visualise the slightly uncomfortable isosceles delta triangle equaling 4.

Of course using a symbol has the potential to create problems with how the band is categorised, eg. how it’s alphabetised in iTunes and on Spotify or where it appears on display racks in music shops. It’s a unique problem that’s waiting for a clever solution, but first the use of the symbol must be celebrated (and enforced) by the band themselves. They won the Mercury Prize, so how about giving them a gold pencil (although as I don’t really believe in competitions, maybe it could be awarded without them being entered), in a category that should, but doesn’t exist (yet), i.e ‘Best Band Name’?

If ∆ were to fully embrace their pictogram then they would be tapping in to a current zeitgeist for lexically inoperable band and album names. For instance, rapper M.I.A’s latest record /\/\/\Y/\ is functionally unsearchable. The artist intends this as a statement of withdrawal from the exploitation of Web content economies. M.I.A, along with other performers such as Gr†ll Gr†ll and Λ, is of a generation of musicians that have grown up with the Internet and recognise that it is often a less than benign force.

Of course, such rebel taxonomies predate Google by some margin. 80s band Freur (a nascent Underworld) were initially represented by a vaguely Celtic squiggle that their record label later insisted must have a pronounceable counterpart. In the 90s Prince famously change his recording name to the love symbol as a means of “emancipation from the chains” that bound him to Warner Bros. The label reportedly had to mass mail floppy disks containing a custom font in order for The Artist Formerly Known as Prince to be properly referred to in print media.