When you think about graphic design's relationship with roads and motorways, the brilliant work of Margaret Calvert and Jock Kinneir springs immediately to mind. The pair was responsible for the massive redesign of the road sign system in the UK, including the Transport font, used on all road signs, and the iconic road pictograms we're so familiar with today – it's a triumph of design that has enduring influence and impact on road users today, who absorb it so seamlessly they barely know they have been 'designed at'.

But what about the design of roads themselves? It's something that has long fascinated designer Melissa Price. By day Price is a designer at top London agency Cartlidge Levene, but by night she is producer of some fascinating self-initiated design and publishing projects, often focusing on graphic and typographic interpretations of maps and systems. The newest is this series of prints dedicated to the much underrated beauty of 'spaghetti junctions'...

How has your interest in the graphic forms of road systems developed?
Seven years ago, I started drawing motorway junctions, and created a book of them – M1: Fifty Years – to celebrate the 50th anniversary of the opening of the M1. I have recently returned to the subject and found a new challenge in the complex geometry of spaghetti junctions.

The original Spaghetti Junction in Birmingham opened in 1972. Encompassing eighteen routes in total, it was built to connect the M6, A38(M), A38 and A5127 north of the city centre. The resulting tangled form was given the 'spaghetti junction' label by a journalist, Roy Smith of the Birmingham Evening News for obvious reasons. The name stuck and nowadays few know its real name – Gravelly Hill Interchange. Since then, many spaghetti junctions have been built around the world, some of amazing complexity. 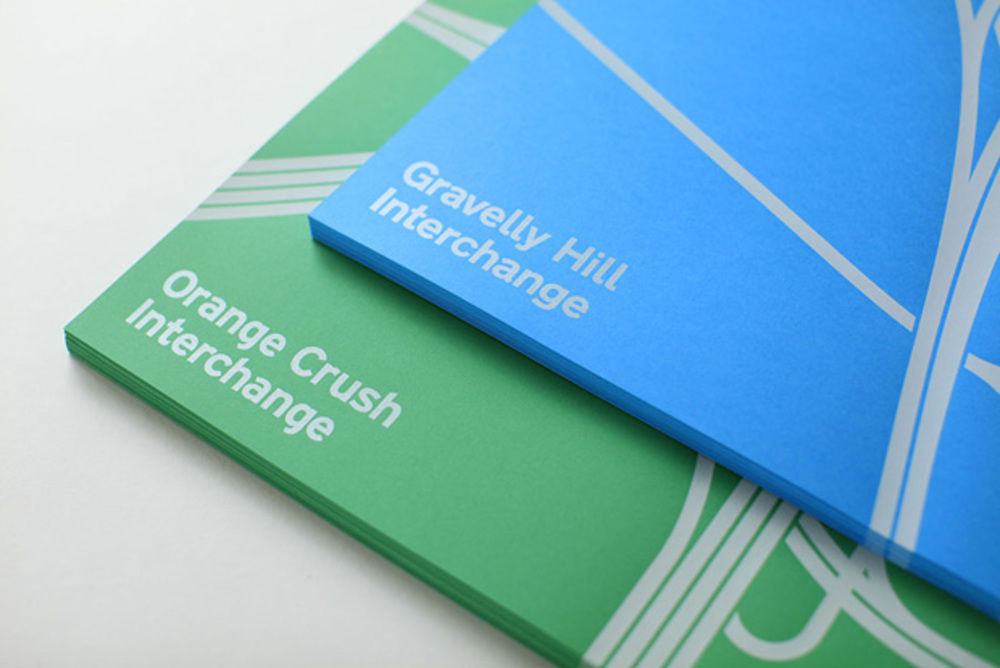 Which spaghetti junctions can we see in your new series and what is special about them?
I have selected two junctions to make into posters initially – the first featuring the original spaghetti junction, Gravelly Hill Interchange, and the second a beautiful junction in the city of Orange, in the Los Angeles Metropolitan Area – Orange Crush Interchange.

'Beautiful' is probably not the word that many users of the Orange Crush Interchange would choose. The junction is notorious for jams and delays, especially when there’s a ball game at the nearby Anaheim Stadium. The interchange is believed to have been christened by a local radio presenter, Orange Crush referring to the beverage and also the traffic jams. There are 34 different routes through the junction, linking the I-5, SR22 and SR57 freeways. The junction’s shape is constrained by its connection to the strongly gridded ground level street pattern, giving rise to straight sections which contrast nicely with the crazily looped connecting ramps. 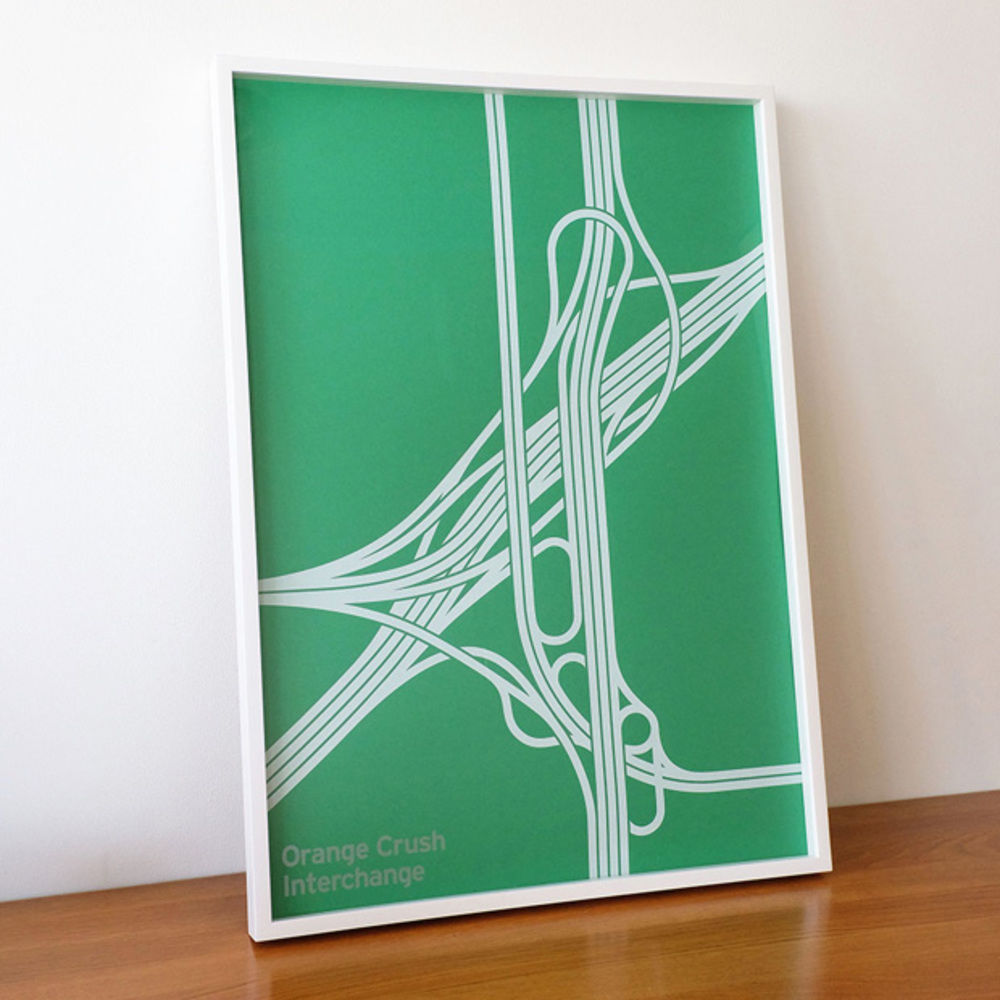 We tend to take our roads for granted – what did you discover about the design of road systems by visually abstracting them to make something beautiful?
The engineered curves of all motorway junctions are governed by simple calculations based on cars travelling at speed and drivers' reaction times. The amount of curvature in the carriageways is dictated by the speed of travel; only gentle curves can be navigated at high speed, leading to the flowing appearance of the junctions. Basically, the design is driven by the most efficient way to move cars from one series of roads to another at high speed. Local geography sometimes pushes the junctions into ever more complex and unusual shapes to allow the traffic to flow. I love finding beauty in the abstraction of these structures into line and colour.

Tell us a bit about how you made the posters…
The posters are hand-screenprinted at East London Printmakers in white and silver ink on Kingfisher Blue and Mallard Green Kaskad 225gsm stock in an edition of 40 of each. 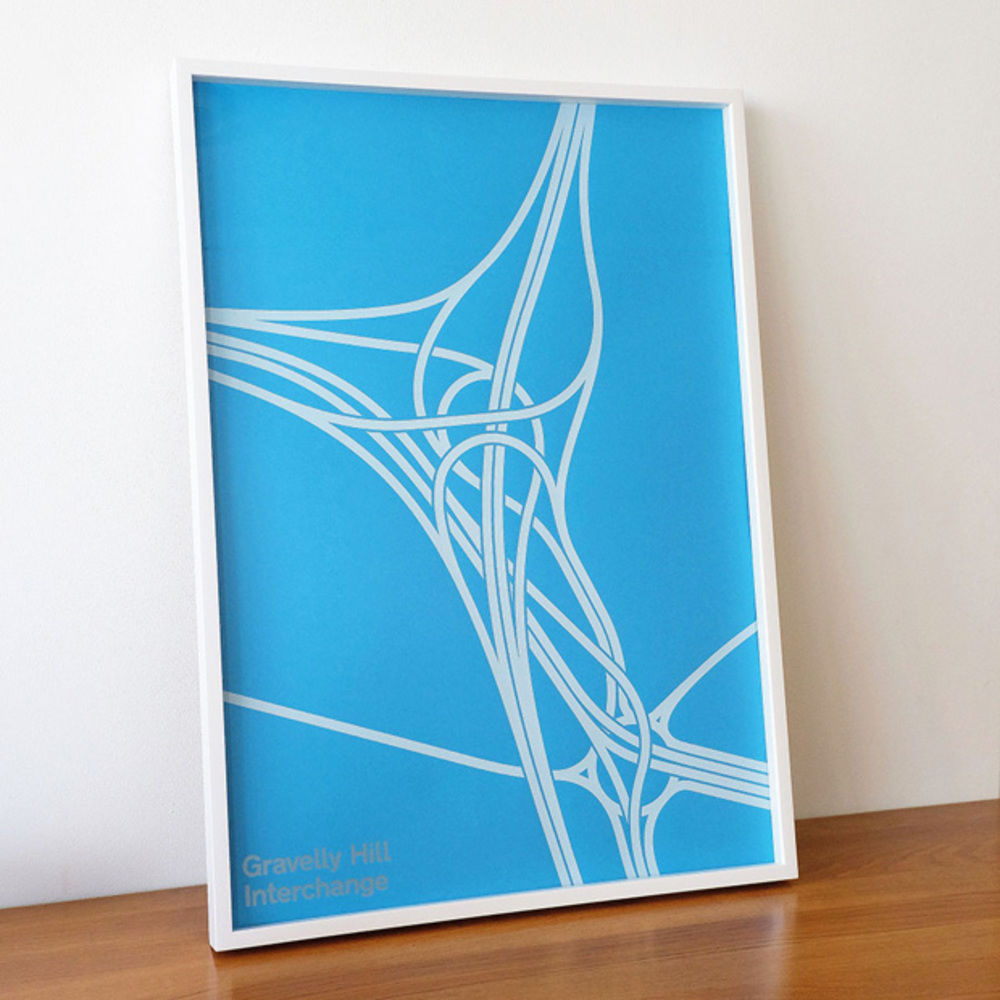