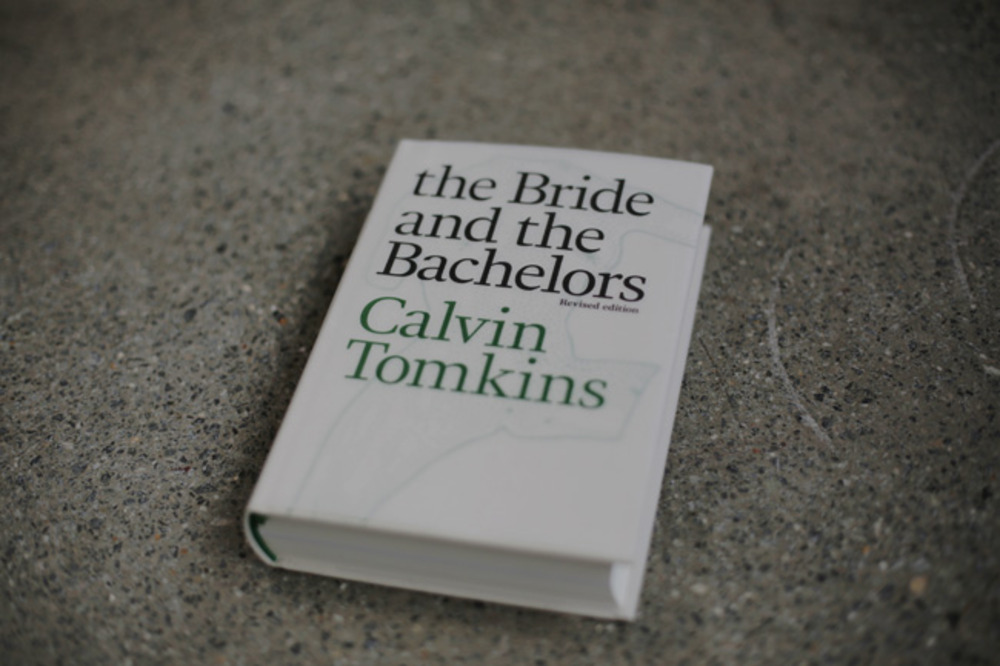 In his recommendation on the book’s reverse, Massimiliano Gioni, chief curator of New York’s New Museum, describes The Bride and the Bachelors as “one of the best art histories ever written… an allegory of love and devotion to that fugitive bride called art.” As its title suggests, this isn’t a generalist history but one that focuses on a particular strand in the development of art and ideas in the Twentieth Century, that which stems from that most mercurial of practitioners, Marcel Duchamp. The bride and bachelors referenced aren’t metaphorical, either, but the four artists — John Cage, Jean Tinguely, Robert Rauschenberg and Merce Cunningham — that arguably best built upon and disseminated his legacy, both in American and internationally. Written by long time critic for The  New Yorker, Calvin Tomkins, and originally published in 1965, the book has just been revised and reissued in a striking new edition.

Published by Gagosian Gallery, this update includes a new preface written by Tomkins and an additional chapter, bringing American Neo-Dadaist Jasper Johns into conversation with the other five artists. As Gioni confirms, the book was a milestone event when originally published, introducing and clarifying a flourishing of mid-century avant-gardism in the States. Written in deft and often witty prose, Tomkins maps these seminal artists’ attempts to consolidate art and life.

What really elevates this reissuing of a classic of the genre is not just the newly written additions, but the way in which they have been package by the Dutch-American  studio COMA. The design features a glassine jacket that carries the textual information while the paper’s translucence allows the artwork printed on the clothbound hardcover beneath, adapted from Duchamp’s Preparatory Study for the Figure in Étant Donnés, to emerge. Inside the text is expertly typeset in New Fournier BP on heavy off-white stock with a core of both black and white and colour photographic plates.