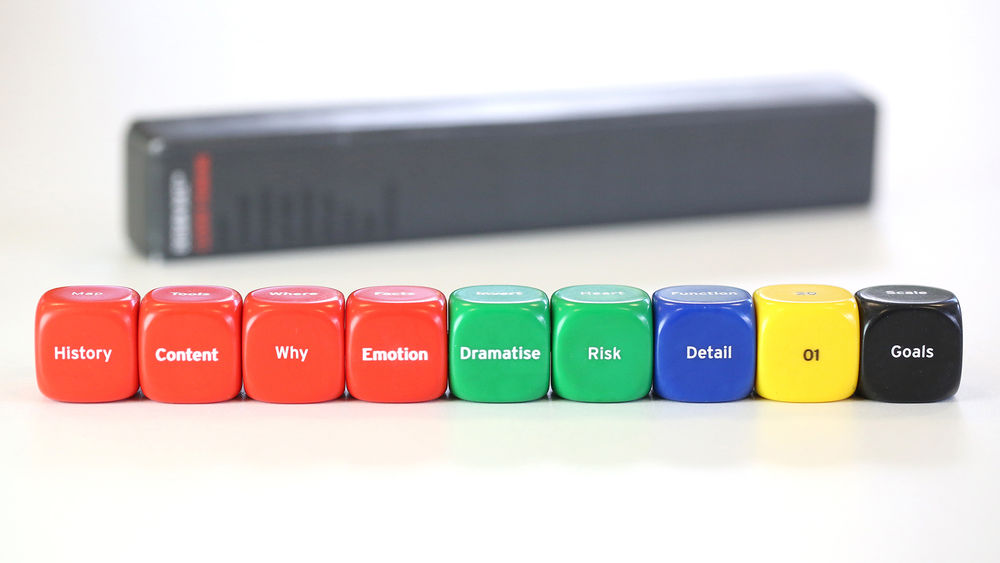 The idea for dice has been around for a while but came into focus nearly eight years ago, where I was working with second year (undergraduate) graphic design students in one-to-one sessions. Although they were all exploring different projects, they all seemed to be missing the same key themes, or had blind-spots in very similar areas. I ended up giving them largely the same advice, and thought afterwards that there’s got to be a better way of helping them to help themselves – without the need for a tutorial every time they got stuck. I could have literally recorded myself and played it back to each student, which sounded like the worst idea ever – simply because feedback has to be personal and has to respond to the individual needs of that student.

We all miss things when we start out, and most seasoned designers would agree this doesn’t stop just because you have some experience! The advice to those students may have been largely the same, but it worked in each case because it was expressed within the context of their own project. That was the point where I started looking for something that was a little less predictable and ‘random’ as a format to keep it interesting, but also involved the student as a key element in the creative chain. Enter the notion of dice; ‘limitation’ & ‘chance’ working together in some kind of creative dance to bring out the best in each given opportunity.

So, over time, I started writing some of the advice down – generic references to start with, which became more focused once I started talking to students and eventually led to a formal set of themes and then the dice as they are today following some testing. Part of the thinking is long-standing wisdom that is difficult to trace in terms of origin (it’s just good advice), some of it comes from my teaching at Falmouth, and some of it comes from personal experiences as a designer (and the ways I’ve gone about resolving dead-spots in my own practice). 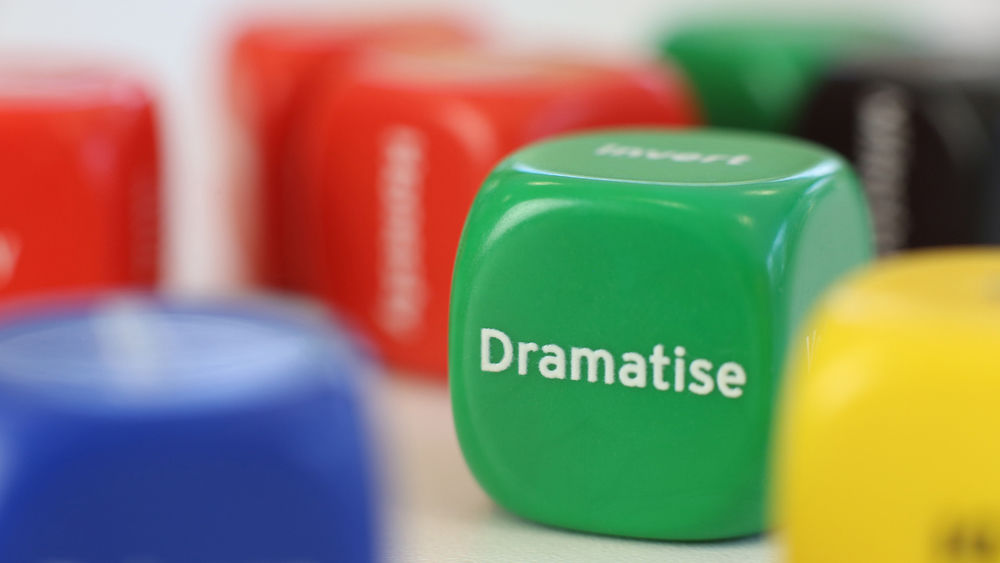 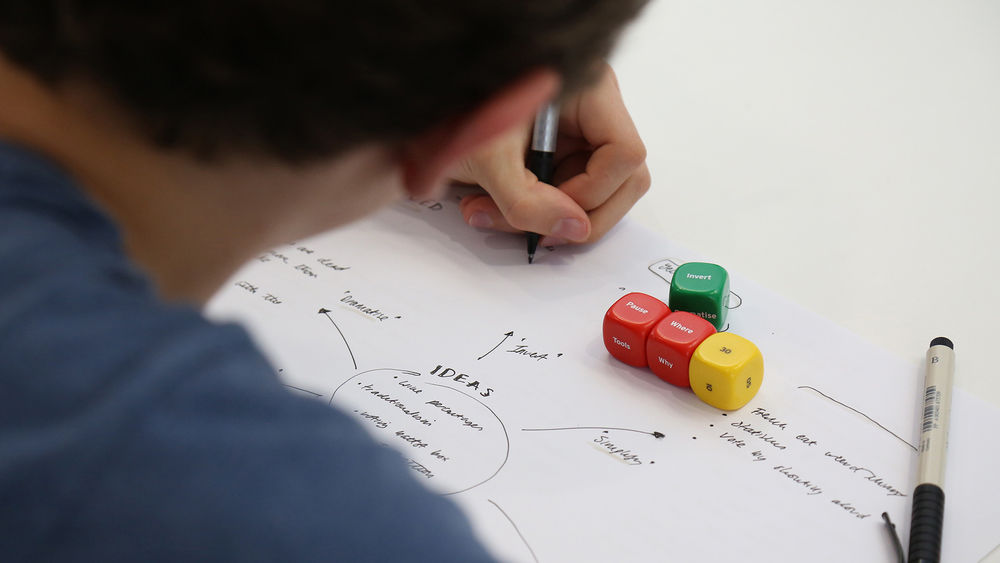 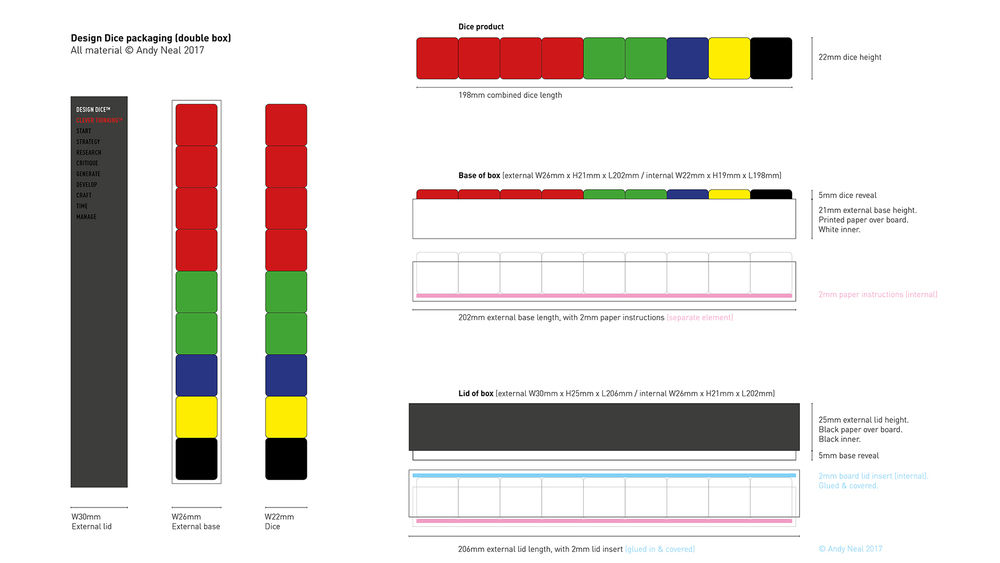 The principle is pretty straightforward – you roll one of the dice at any point during a project’s development, and each face has a keyword that can be interpreted in the light of your current project. The word suggests a prompt that encourages a change in direction or lateral jump that will hopefully cause you to think differently about the problem-in-hand (much as a tutor would try and offer a different perspective), and the aim is to build breadth and depth in your thinking. There are four red dice; which focus on early research, building context, considering audience and so on. Then the two green dice help develop initial propositions – pushing early ideas into working concepts. The blue die covers themes surrounding craft & production, and the black die looks at how a project is managed. There is also the yellow die, which is used in conjunction with any other die as a ‘timer’ – encouraging you to work against the clock (the numbers can be days, hours, minutes or seconds depending on the task-at-hand). They all follow a loose ‘design process’ without forcing you to work outside of your normal practice, complimenting rather than constraining – if you will.

As an example, if I rolled the word ‘MAP’ (which appears on one of the red die, and is both a noun & a verb) whilst developing ideas for a new Cornish Craft Beer brand I could;

• Map what the world of craft beer looks like (conceptual map).

• Map the connections between beer-type and tribes of people (relational map).

• And so on… (you make up your own definitions and that’s the point).

I could have also rolled the yellow timer die at the same time (let’s say it was a ‘60’), which may limit the activity to either 60 seconds (probably too short for this exercise), 60 minutes (ok for a one-day student project) or 60 hours (for a more involved and in-depth study). You can add degrees of complexity by rolling a second red die at the same time; ‘WORDS’ or ‘PICTURES’ for example could suggest the way you record your thinking (writing or drawing), and so on… The options are ultimately limited, but pretty expansive – there are just over 1200 different combinations for the red dice alone, and that ought to be more than enough for starters.

There are obvious nods to some of the classic creative tools – Oblique Strategies and Thinking Hats in particular, which have both informed the dice in some way (I used them as a student and in early years within education before they became part of the catalogue of references that I use now in teaching workshops). However, I was interested in the idea of ‘framing’ a more formal ‘design process’ ­– and to create ‘edges’ to work within whilst still allowing for surprise and unpredictability. The lack of guidance as to the meaning of each word is deliberate, so you have to interpret them in the light of the project you are working on, which means you have to go ‘off-piste’ and find your way home – building the breadth and depth on your creative journey. I’ve trialled them in the UK and Europe with some really positive results and have finally found the time to do them justice on KickStarter. The deadline is early July, so there’s still time for folk to get on board and help support the project…

Find out more and grab your set of Design Dice here