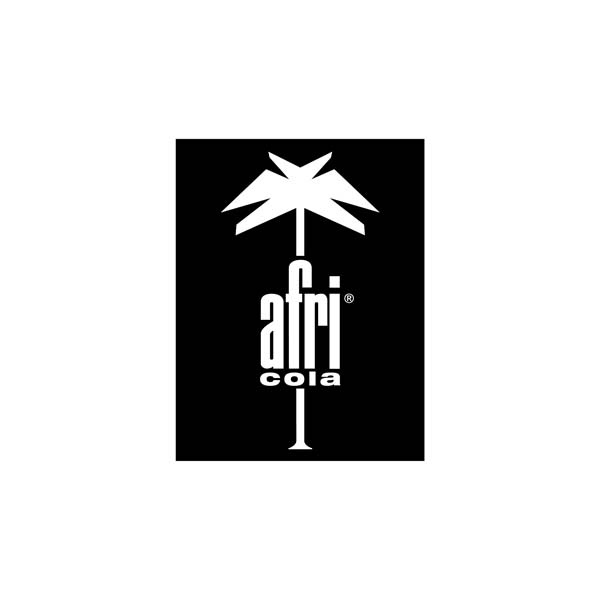 The Afri-Cola logo: white in front of black liquid, the “f” leaning over the “r”, extended with the strange abstraction of a palm tree. Captivating, albeit by today’s standards the brand is much too complex.  That’s exactly what I most admire about it, especially as that complexity is carried through to all areas of the product’s commercial identity.

You see, the logo itself wasn’t the reason for my excitement when I suddenly saw the bottle in a hip Berlin bar at the end of the 1990s. I had completely forgotten that this product existed. At the beginning of the 1970s it seemed to disappear from the supermarket shelves, but now this naughty but fascinating dream had reappeared.

It originated sometime around 1968. In truth, at only three or four years old I was still too young to form any strong recollections. Nevertheless the Afri-Cola ads thrust their way through the television screen into our living room and left the first inklings that the world was not as hunky-dory as my mother tried to make me believe. Something deeply disturbing was happening out there. Was that representative of the lives that grown-ups – particularly my parents – truly lived?

Those who know the Düsseldorf photographer and commercial artist Charles Paul Wilp’s Afri-Cola TV ads will instantly know what I’m talking about. Before you hustle off to find the actual clip first try to imagine the following: A destitute (German) beverage company gave you the job of whipping this thing into shape. It’s the day of the first presentation. You enter the conference room. Everyone is there; this is a big boss affair. Brief hellos. Then you take the stage and say the new slogan: “Sexy – Mini – Super – Flower – Pop op Cola. Everything is in Afri-Cola.”

Back then they still smoked in boardrooms, and most likely everyone lit up a cigarette to justify the awkward silence. But you continue with self-confidence. “I see a wet and partially misty sheet of glass, behind it a naked man, a soldier, nuns and harlots writhing and lounging.” Someone stands up and asks, “Nuns and harlots? Are you serious?” That’s the moment when you pull out your joker. “Of course. I’ve asked Marianne Faithfull, Amanda Lear, Donna Summer and Marsha Hunt. They’re up for it. They pour Afri over their faces and a voice from off-stage says “fully reasonable people.” Everyone is still silent as you add that you imagine Stockhausen-like background music.

Finally, the chairman of the board stands up and says, “you haven’t disappointed me. Excellent work. That’s just the way we’ll do it. Maybe one little thing, could we show our bottle with the beautiful logo on it once in a while?” Obviously Paul Wilp didn’t need to be told twice: “Okay. Once in a while.” Which proves once again that things aren’t what they used to be.

…is a  design studio based in Amsterdam and Berlin. It focuses on creative strategies, dynamic identities, graphic, book and web design within the scope of cultural and commercial projects. It has won such awards as the Art Directors Club Award NY, The European Design Award and The Best Dutch Books award. In addition to daily design practice, Dirk Laucke and Johanna Siebein are visiting tutors at the ‘Hochschule für Künste Bremen’/Germany and  give lectures and workshops internationally.

…originated in 1931, the creation of the Cologne based company F. Blumhoffer Nachfolger GmbH. Cologne. It soon became one of the most popular soft drinks in Germany, a totem of the Wirtschaftswunder, or German “economic miracle”. By the 1960s Afri-Cola had started to lose its market share to the big American brands, Coca-Cola and Pepsi. Charles Wilp’s famous campaign was supposed to re-energise the product’s image and, hopefully, its sales. The downward trend continued, however. Bought in 1998 by German beverage company Mineralbrunnen Überkingen-Teinach AG, the flavour and caffeine content was tinkered with unsuccessfully until 2006, when the original recipe was reinstated and the drink finally began to see a resurgence in popularity.