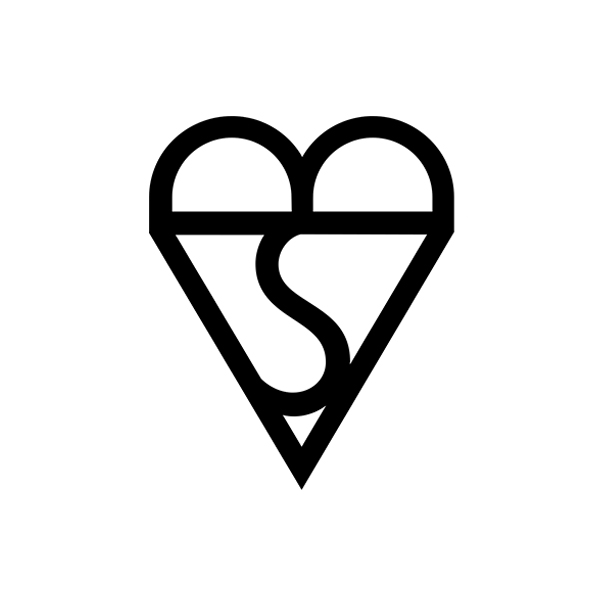 I first discovered this symbol whilst sat on my sofa, bored at home. I spotted it on my radiator. It was a tiny engraved mark, barely noticeable. The delicacy of this odd heart shape, engraved at such a small scale, was absolutely exquisite to me.
I first thought it might be a radiator company in the UK, but a couple of days later I noticed it on a manhole cover on the street. Bigger this time, but still quite invisible, lost in the pattern of the plate. Then I spotted it again on the overground glass. I still didn’t understand what it symbolised, but I loved how this clumsy heart shape was seemingly everywhere. Eventually it started to become a game; like hidden Easter eggs, finding these heart symbols turned into a personal challenge. It felt like no one else realised its beauty or enjoyed it as I did. This omnipresent symbol was like a secret I was the only one to know about. On my way to work, I come across nine of them every day. I think my attraction to this logo was not only its shape, but also—and maybe more importantly—because of all the unusual materials (cast iron, glass, steel) it was applied on.
My game continued, until one day someone mentioned it at work and I finally discovered it was the Kitemark from the British Standards Institute. The Kitemark was originally conceived as a symbol to identify products manufactured to meet British Standards specifications. The ‘heart’ shape was actually a ‘kite’ shape formed by a B for British, an S for Standard and a V for Verification. Drawn in 1903, it’s the oldest product quality mark in the world that’s still in use. A survey demonstrated that the Kitemark is recognised by 82% of the UK population. This analysis revealed that people believe that Kitemark products are safer and of a better quality than similar products without it. It’s a symbol of trust that indicates safety, but for something so serious it feels quite naively drawn, which adds to its charm. The positioning of the letters as a heart shape give the symbol a friendly feeling. What could be more universal and trustworthy than a heart? It’s a rare symbol of positivity in the municipal environment.
I’m French and as far as I know we don’t have this kind of organisation in France, or if we do, nothing has ever brought my attention to it like the Kitemark. Arriving in a new country, and losing all your grounding, forces you to be in a constant state of hyper-awareness. You take notice of everything around you. The Kitemark might be ubiquitous for anyone living in the UK but I had never encountered this logo before moving to London. I think it’s because of this that I’ve been able to enjoy it so much. When you’re exposed to something all the time, you often end up blind to it.

...is a graphic designer from Paris. Having completed an MA at ÉSAD, Amiens, she now works at Commission, the London-based design and branding agency founded and led by David McFarline Christopher Moorby. She's passionate about typography, and believes the most important part of the design process is taking care of the details.

...stands for the British Standards Institution, the national standards agency for the United Kingdom. The organisation was founded in 1901 and initially focused on standards in engineering, before branching out into other areas after receiving the Royal Charter in 1929. The BSI Kitemark was originally sketched by Sir John Wolfe-Barry, designer of London's Tower Bridge, and was first used on tramway rails. It's used to identify products where safety is paramount. In 2014, BSI introduced a new digital Kitemark, permitted for use by websites and digital services who are able to prove they handle customers' data securely.