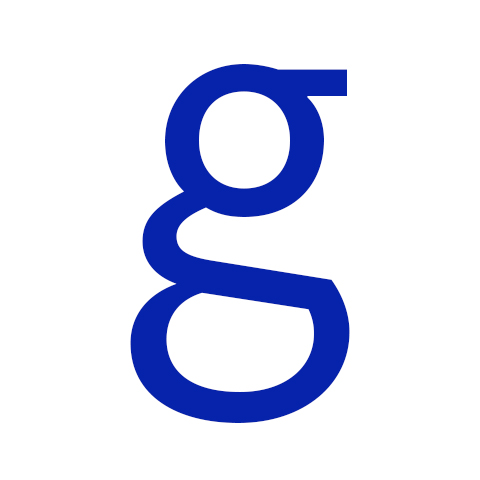 Squint at many passages of text setting and you are likely to find slightly denser smudges that emerge from an otherwise homogeneous grey texture. One frequent culprit in such circumstances is a Letterform favourite: the double-storey, lowercase ‘g’. This is something of a problem for those typographers who aspire to make flat, even, grey, transparent fields of type in which the reader is imagined to be immersed through an experience we call reading. Reading is something of a struggle between at least two different forms of attention. There is the top-down, concentrated form of attention that enables us to look at words but think of concepts, then there are the bottom-up forms of attention, the noises off that distract us for apparently no reason. Heterogeneous smudges would seem to belong to this latter category.

There is of course an alternative form to the double-storey ‘g’ which has a more open tail, arguably feels more modern, is easier to write, and which more closely matches the balance of form and counter-form found in its fellow type characters. Which begs the question, why has the double-storey ‘g’ endured? If evolutionary principles apply, one might have expected its fitter rival not only to have survived, but to have superseded it. Instead of extinction, however, there is a continuing phylogenesis: a diversification in this case of one letter into two distinct typographic sub-species.

The survival of the double-storey ‘g’ might be down to literary tradition or affectation, but I would like to think that we simply cannot bear to say goodbye to something so beautiful. Xavier Dupré’s, FF Absara Sans Regular provides a useful example; an amalgamation of forms that fuse elegantly into one powerful expression. Although a sans serif we can still trace the gesture of a pen as it comes to a stop at the top right of the bowl, making a corner before completing the graceful closed loop. Almost nothing seems to align yet everything is perfectly balanced. A few reference points anchor it to the baseline, though the letterform does not so much seem to stand on the baseline but float on it using the duck-like buoyancy provided by the bowl of the ‘g’ submerged below.

Perhaps it is this richness and complexity exhibited by lower case ‘g’s and their uncompromising refusal to trade-off beauty for absolute subservience to readability, that make them such a recurring topic of Letterform.

…is Course Leader of MA and BA(Hons) Graphic Design at the Arts University Bournemouth. A practising designer for many years he became a full-time lecturer in 2003, since then has been able to keep designing by becoming a student (he is currently working towards a PhD) and with the help of a few colleagues who have trusted him with the design of a catalogue here, or a book there. His research interests relate to the use of metaphors across all aspects graphic design and the ways that this can be understood using theory and methods from the cognitive humanities. He has had articles published in Book 2.0, Design and Culture, and Visible Language among others, and there is a forthcoming book chapter in Encountering Things edited by Leslie Atzmon and Prasad Boradkar.

…studied graphic design in Paris and Calligraphy and Typography in Toulouse. He lived and worked in Cambodia for several years and has designed numerous typefaces including FF Sanuk, FF Yoga, and FF Yoga Sans. His FF Angkoon, FF Absara and Vista Sans were all recognised by the Type Directors Club.