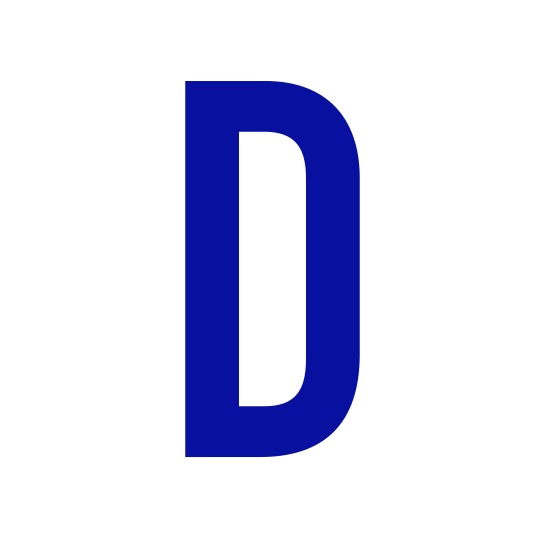 As a designer, I fall in and out of love (ok, lust) with many typefaces as I work, but as an illustrator who uses type as a vehicle for illustrative purposes, I pretty much exclusively like working with forms that allow me to explore my own visual ideas with as much freedom as possible. Letterforms that will withstand being isometrically extruded, melted, exploded, humiliated. So I naturally spend a lot of time with letterforms not unlike the DIN 1451 uppercase D.

Legibility is something us illustrative typographers often grapple with, wrestling late into the night, swearing at the monitor as email replies from loved-ones inform us that the word “Being” actually looks like “Briny”. Annoyingly, clients generally insist on legibility, so I always start a piece by creating legible, balanced, letterforms, which form the basis for more elaborate compositions, and that play with illegibility and often riff on the idea of revealing something hidden. Therefore it has always made sense for me to use very bold, san-serif geometric letterforms as the core of my designs, as any kind of embellishment at this early stage can risk overriding (or ‘buggering up’) the image later on.

I often look to typefaces like DIN 1451 for assistance in working out tricky elements (generally, the letters S, R, K). Even without this direct reference, the simplest, most pleasing forms created at this stage often end up resembling DIN anyway, a font designed to be easily copied. I love the obvious simplicity of DIN 1451.

There aren’t any particularly interesting stories behind it; it’s a purely utilitarian typeface, with a utilitarian background. Created in 1931 for use on German road signage, and adopted globally for a variety of uses (from signage to advertising to David Carson’s 90s magazine work), the name is an acronym for Deutsche Industrienorm (German Industrial Standard). Despite its prosaic beginnings, and its history of controversy regarding its aesthetic merit, I think it’s a very beautiful design.

The uppercase D embodies the geometric perfection of the letterforms, composed equally of angled rigidity and circularity, an interplay I like to explore in my own work – hard and soft, round and square. I always go back to DIN 1451. It will forever be there for me, happy to take me in from the cold and make me a nice mug of Glühwein.

…is a London-based illustrator whose work often centres around type-based visuals. Just before Christmas he created an illustration for Soho House to promote their seasonal festivities, where the words ‘New Year’s Eve’ were spelled out by a series of interlocking ribbons. Other recent clients have included audio brand Polk, IBM and Econmia Magazine, for whom Williams developed a series of numerical illustrations to accompany a piece about the changing number of women on company boards.

Founded in 1917, DIN is the German national organisation for standardisation. Perhaps one of its best known products is DIN 476 – the standard that introduced the A-series paper sizes in 1922, which was  adopted as an international standard in 1975. As well as road signs, DIN 1451 was also used on German car number plates from 1956 until 2000, when it was usurped by FE-Schrift, a typeface designed to improve automatic character recognition.