You are the Editor of Le Petit Néant. Can you tell us a little bit about your background and how you came to be working on the magazine?

My background starts in Mexico where I was born and lived during the first five years of my life.Then it was Italy, France and London. In Paris, I got an MA in Painting and Drawing at the Beaux-Arts. Since then I try to survive as an artist. I have always drawn....

Years ago, when I was living in Naples in my twenties, I was doing some drawings for a monthly publication called Napoli Monitor, which was intended to be equally divided between drawings and texts. I don’t remember how, but we started a kind of ironic controversy between illustrators and writers, our point being that, in fact, there were too many texts and not enough drawings. We thought then about a publication just with drawings in pure black and white. That was, I believe, the first seed of Le Petit Néant. But at that time nothing more happened so I kept this idea in the back of my mind until I left Naples for Paris and then moved to London in 2012. In the meantime I had made a few discoveries that would become some of the bases of the future publication: the art collective Le Gun, the work of Andrzej Klimowski, the movie Le Quattro Volte, Luciano Emmer’s video documentaries and the work of the photographer Mario Giacomelli.

In London I did an MA in Visual Communication at the Royal College of Art, where Le Gun had been born and Andrzej Klimowski was teaching. When I spoke to Andrzej about my idea, it soon appeared obvious that I needed to work with a graphic designer who could help me to give shape to the publication. I approached Giulia Garbin who was also studying at the RCA and she was, from the beginning, very excited about the project. Le Petit Néant was born. 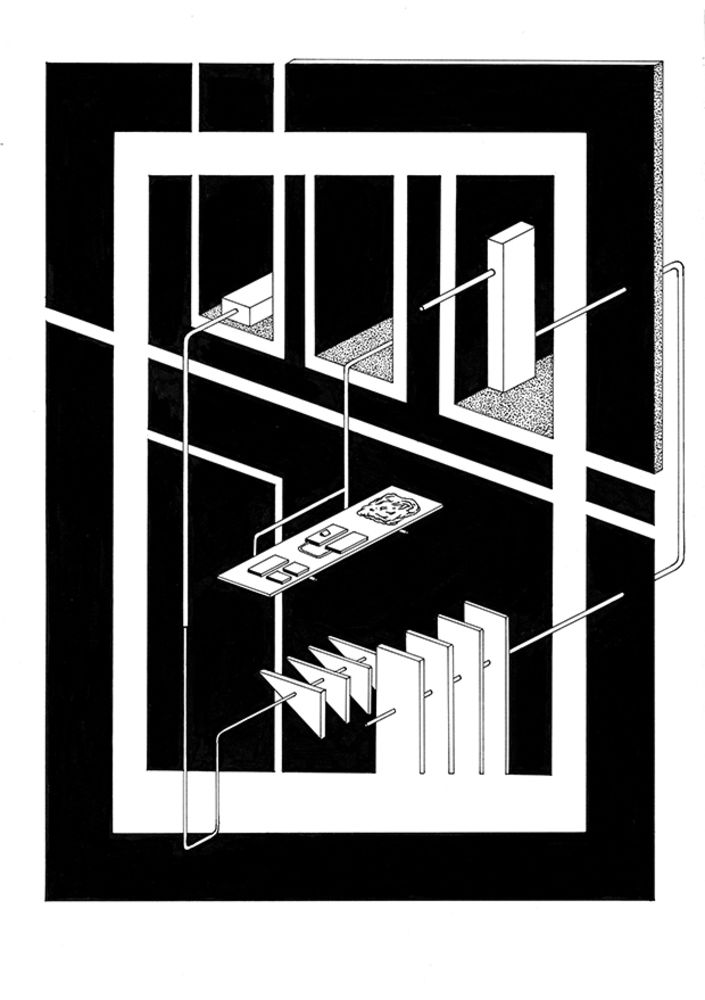 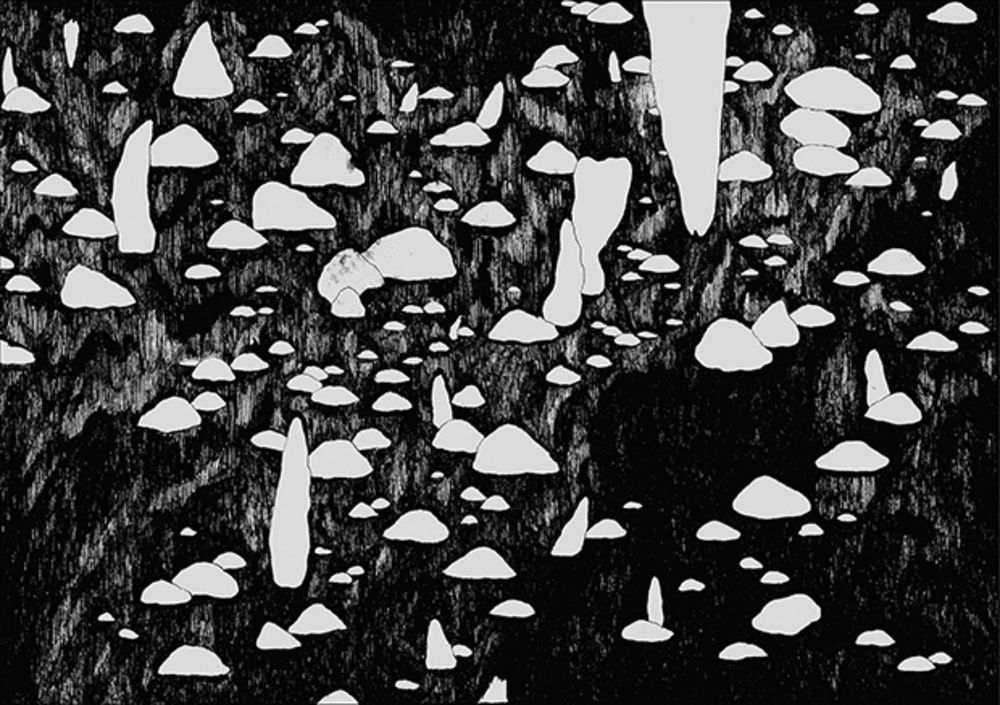 Can you explain the thinking behind the name of your publication?

At the start you always look for a cool title, something catchy. I was in Paris, in my living room with four dictionaries on the table: Latin, Italian, French and English. I had some paper and a pencil and I was writing down all the words I liked. Of course there were too many… Then I wrote the word Néant, a French word that I always liked. Néant means nothingness. It makes you think about something that cannot be measured by any standard. So a small nothingness is a very fascinating concept. This title was not easy to pronounce outside of France, but it sounded very good to me.

In fact, it is only with the passing of time that the title revealed its meaning to me. I like to think that if drawings could create their own publication they would do something like Le Petit Néant. The names of the contributors are hidden because this publication is not about us as creators but about drawings as creatures. Le Petit Néant could represent the human condition in front of the infinite universe. Everything we create is a "small nothingness" (if you think in terms of time and space) and it will disappear. I do not find this idea scary, quite the opposite. There is also another aspect that I really like. Imagine when I die, go to Heaven or wherever and I am asked about my background: Miguel, what have you done in your life? And I answer: well my dear, I did a small nothingness! It is a bit like Ulysses with the Cyclops. 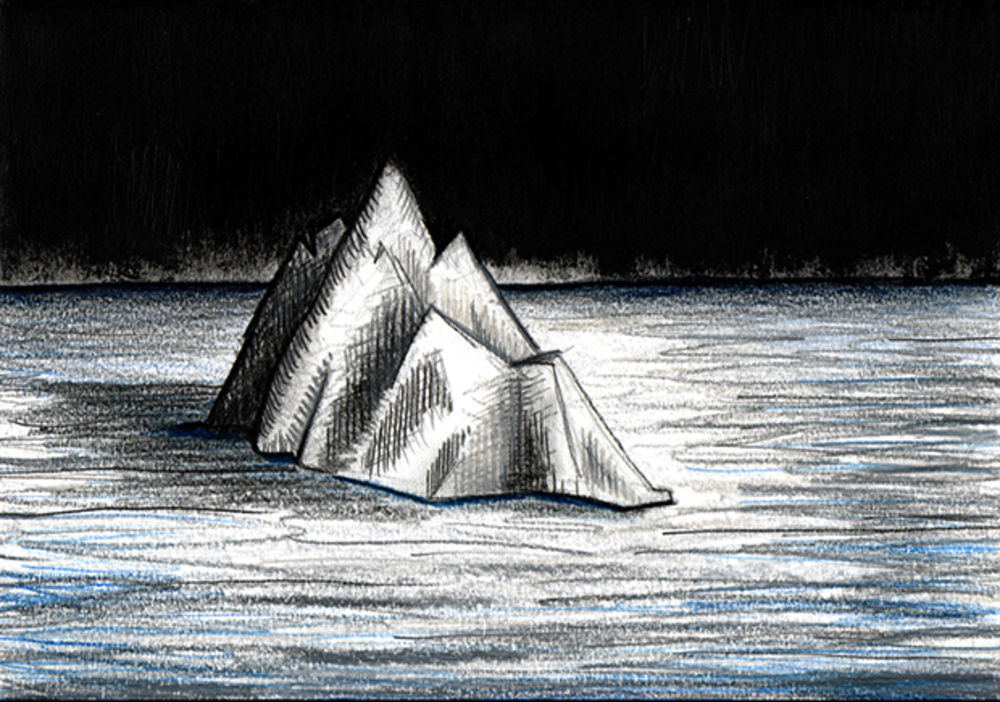 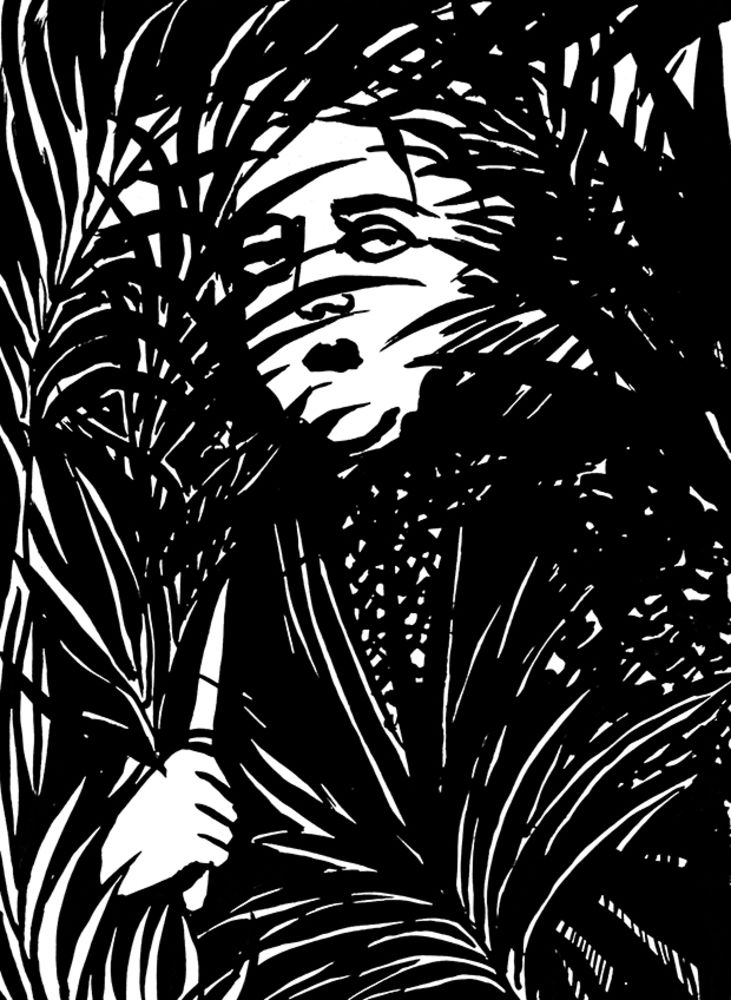 Le Petit Néant has almost no words in it. What was the thinking behind such a bold decision?

Drawings do not really need words. A single word can change the meaning of a series of drawings, it can be very powerful. So when we don’t have words we are forced to read pictures in a different way, we have less reference points, we feel less supported. And we connect elements in a new way, perhaps in a more personal and subjective way. Our imagination is then triggered by the drawings but also by the gaps created by the lack of guidance that words would bring. It is also a statement to declare: drawings are enough! 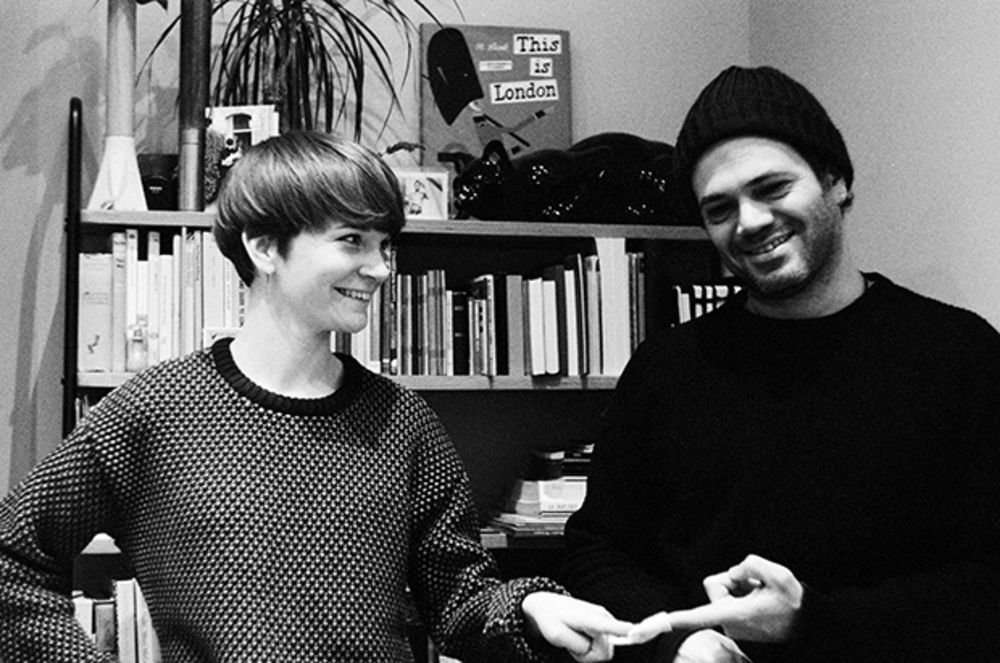 You have artists from all over the world contributing to the work. How do you decide who to include for each issue?

There are two ways to be published in Le Petit Néant: through invitation or through the open call to submission. I want to be surprised by a drawing, something special has to happen. I like when a drawing is able to trigger my imagination, like an invite for a journey. It is very subjective. We are constantly bombarded by images from everywhere. And most of time they are ugly, repetitive and empty, they don’t really "communicate". Selecting one single drawing is important but it is also very important to keep in mind that in Le Petit Néant the drawings work orchestrally. So they have to work together, to communicate with each other.

While almost all of the artwork is black and white, there are a few colour images here and there. Are your contributors asked to work in certain ways or with certain mediums?

In the last Issue we gathered the following techniques: ink, brushes, pencils, etchings, painting, pastels, watercolour, feathers and three artists created their images digitally. We are open to any kind of medium. But we do not have photos or movies stills yet. Year after year the definition of what “drawing” is has evolved… And I like to believe that Le Petit Néant evolves too. 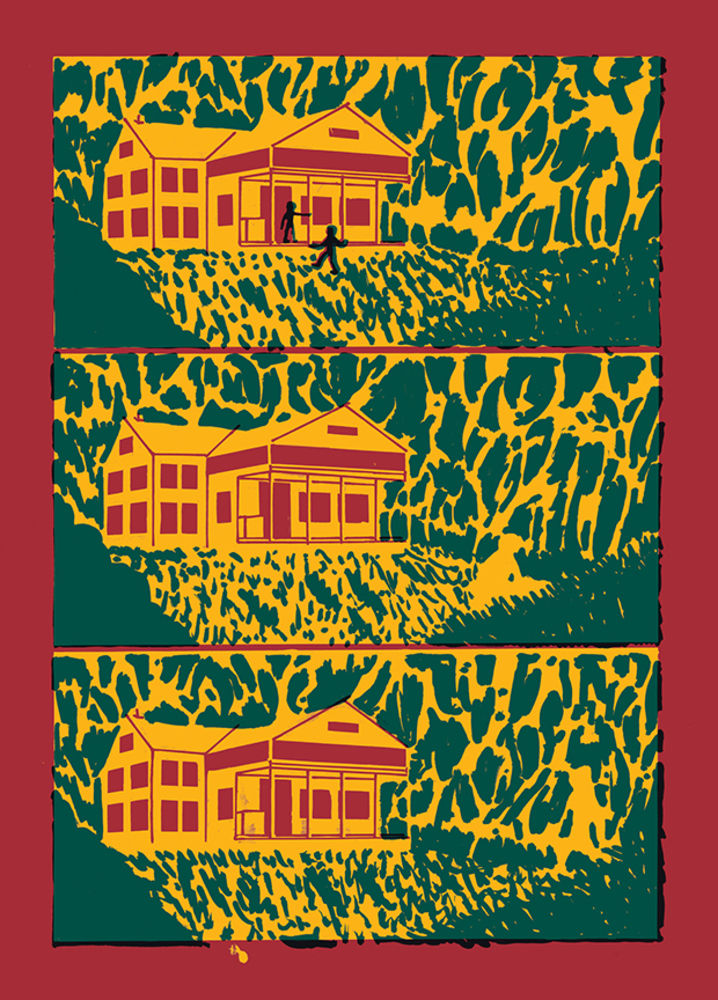 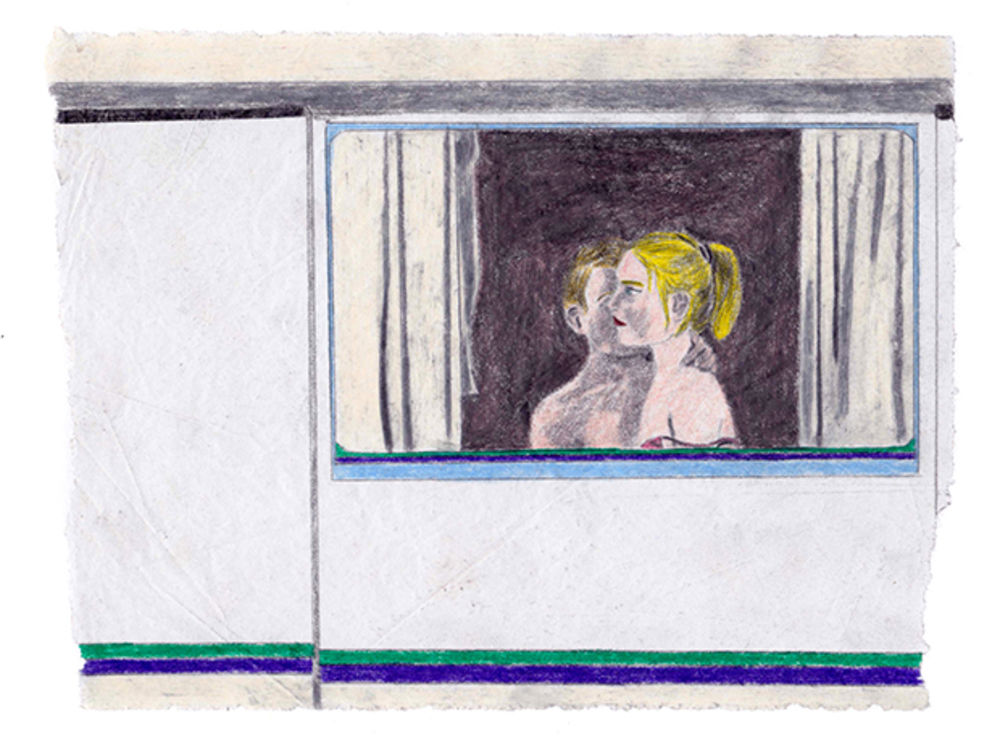 What do you hope your readers will experience when getting involved with your publication?

In my mind the word “audience” is more appropriate than “readers”, concerning Le Petit Néant. As I said before, let’s imagine that the drawings prepared this publication on their own. And that Giulia’s and myself were just there to provide a physical space in which they could live and create connections, stories. Of course they are not like the Rorschach’s inkblots but in a way, a sequence of wordless drawings will be read in a different manner depending on the viewer. If you read Le Petit Néant as a collection of nice single images you are just scratching the surface of what I believe is its real potential and its intention. The real experience starts when you let yourself be carried away by the drawings, by the details, by the textures and you start to create your own journey, your own connections, your own narrative. It needs a bit of time and patience. And for some, I know, it does not work. Le Petit Néant 3 starts with a beautiful drawing by Marie Jacotey in which you see a lecherous girl on a couch. Her eyes look at yours. There is a sentence, the only text present in this Issue. It says: ‘Come and play’. This is our invitation to the audience and it says it all. 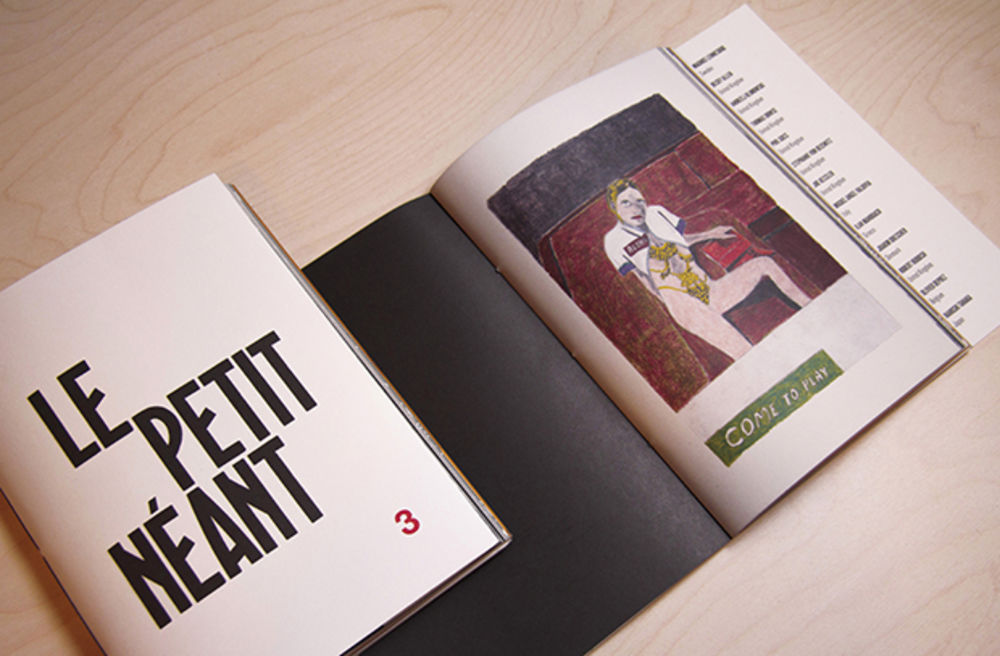 What are your plans for Le Petit Néant going forward?

When I started to think about Le Petit Néant my idea was to create the drawing publication of my dreams, the one that I would have liked to find in the bookshops. I think we succeeded. So what’s next? I believe it is fundamental to evolve, to keep moving on. I am very happy about this third Issue, and Giulia and I have never worked so well together. But as I said, the goal is not to be comfortable; it is to pursue new ideas and challenges. I have many ideas about what could Le Petit Néant be in the near future, but it is too early to talk about it. Que sera sera.

Find out more about Le Petit Néant or pick up an issue here. 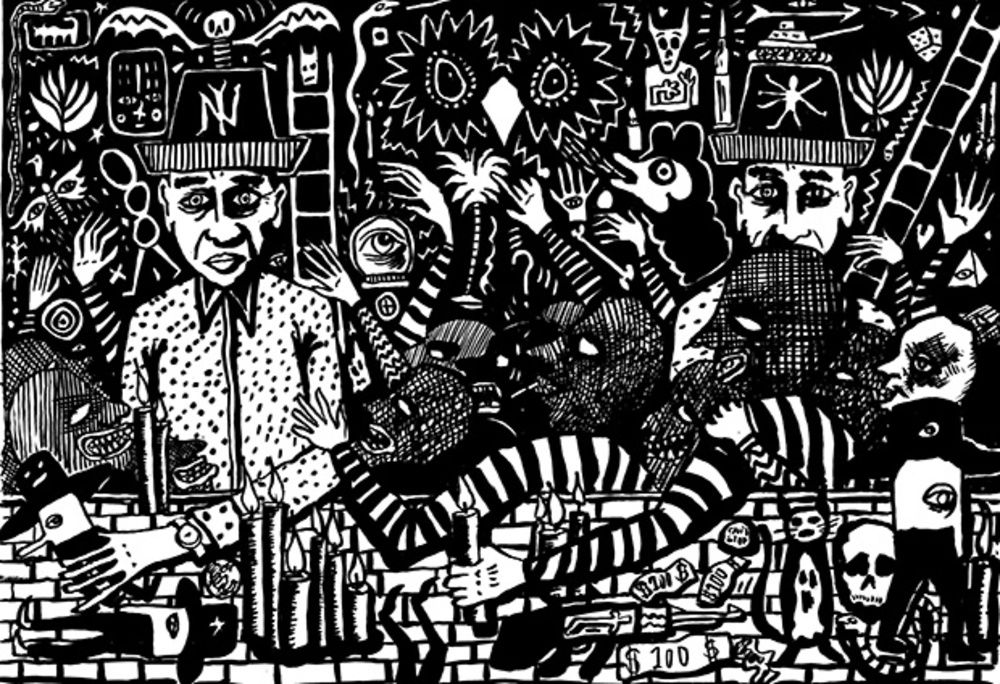