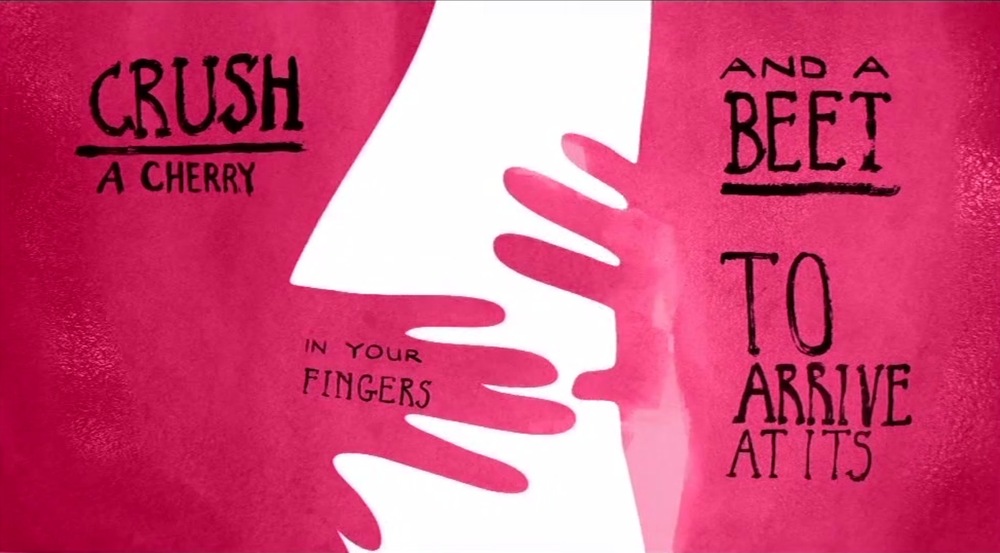 Still from The Polish Language by Alice Lyons, 2009

The avant-garde filmmakers of the early twentieth century were interested in liberating the then-new medium from those other media that were alreadyconsidered art prior to their incorporation into film — theatre and literature, language and writing. Today, however, the conceptual integration and the creative visualisation of what had once been (ideologically) rejected as ‘un-filmic’ has become a growing trend. Artists now strive to interpret literary works in animated poetry-clips, transform literary idioms into filmic language and draw attention to the form of writing to visualise the content it conveys.

Panther by Clemens Kogler, 2005
With his short film, Clemens Kogler created a written visual interpretation of Rainer Maria Rilke’s poem Der Panther [The Panther, 1902]. The verses appear as animated, intertwining, sculptures of monumental letters that attempt to express the emotions of a caged animal. The panther’s constrained freedom of movement, his monotonous prowling around in a circle – “the soft movement of supple powerful strides that pace around in the smallest of circles” – is visualised by the repetitive animation mode, and the oppressive feeling of hopelessness – “To him, there seem to be a thousand bars, and back behind those thousand bars no world” – is intensified by the descenders of each letter, which lay over the picture like bars.

Herzog and the Monsters by Lesley Barnes, 2006
Lesley Barnes’ Herzog and the Monsters is a black and white animation of Maurice Sendak’s illustrated children’s book Where the Wild Things Are (1963). Because little Herzog cannot read the characters in his grandmother’s many books, he cuts them out and creates his own letter-stories, and dreams up a letter-world in which monsters gain bizarre contours through specific arrangements of letters. At the beginning of the video, images and readable writing complement each other, like in Sendak’s book; however, upon entering the dream world, the writing becomes increasingly difficult to read, can hardly be distinguished from the imaginary images, and intensifies the dream-like atmosphere of the surreal artificial image world as a free-flying, illegible swarm of letters.

Tongue of the Hidden, by David Alexander Anderson,  2008
The artist and filmmaker David Alexander Anderson visualises ten poems by the Iranian poet Hafez, which are recited by Jila Peacock in English and in Farsi, as Persian calligraphy. What is heard on the soundtrack about the central ideas of Sufism can be read in parallel and also viewed as images. The writing assembles itself into pictures, and thus nonverbally conveys its meaning : the lines of calligraphic script dance as fishes through the sea of writing, hang like branches  of a weeping willow, stalk as a peacock through the image, or flow through it as a carpet of writing and as a graphical pattern. The film is based on the hand-printed artist’s book Ten Poems from Hafez by Peacock.

The Polish Language by Alice Lyons, 2009
The American poet Alice Lyons, who lives and works in Ireland, does not want only to present poetry in the classic medium of print, she also seeks to realise poems in other contexts and media – as installations and films. The animated poetry clip of her poem The Polish Language is a collaboration with the Irish animation artist Orla Mc Hardy. Words from the poem develop into handwriting on the screen, appear as carvings, fly around in coloured type, and are shown as imprints on books or text inside books. The aesthetics of the film references bibula, Polish underground literature of the 1970s and 1980s, and the film pays homage to post-war Polish poetry.

This November, FACT is pleased to present the UK premiere of Type Motion, an exhibition featuring over two hundred outstanding examples of text and typography as used alongside the moving image. The exhibition celebrates the creative possibilities of using text beyond the context of print; it seeks to showcase both the importance of writing as well as the ways it can achieve entirely new modes of expression with the addition of movement.