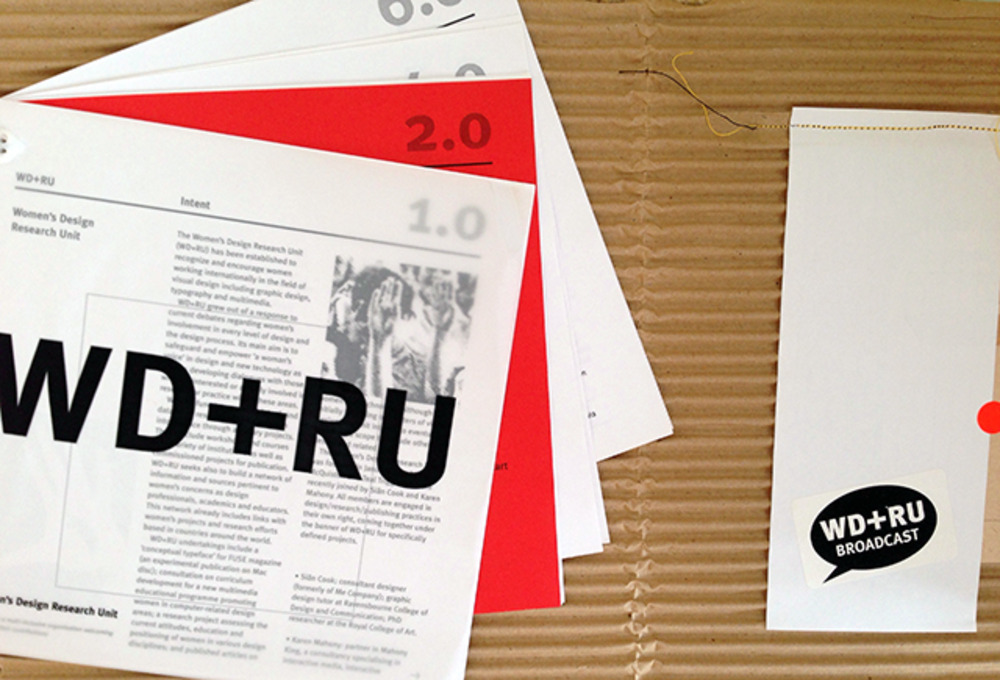 Can you describe the design landscape at the time that the Women’s Design + Research Unit was formed?
Women’s Design + Research Unit (WD+RU) was formed in 1994. The 1990s had such energy. The previous decade had been characterized by a kind of thinking around postmodernism and the digital realm, which informed new kinds of radical visual and typographic experimentation. By the following decade, designers rebelled against the slickness of computer-generated work, morphing into a gritty, grunge aesthetic; post-punk and culturally astute. David Carson had declared the ‘end of print’ whilst Neville Brody launched Fuse – an experimental typography publication. Brody and Carson had become the faces of graphic design; you couldn’t flip through any magazine without some mention of them.

At the same time, graphic designers were becoming more vocal about the politics of design and their role in being socially responsible. At the end of the 1990s the First Things First Manifesto 2000 was published, offering a critique of the role of design in contemporary consumer culture. This signaled a paradigm shift in how designers employed their skills as communicators and for whom.

What first prompted you to form WD+RU?
WD+RU came about partially in response to what was a highly visible male dominated graphic design profession. This was in evidence during the FUSE ’94 conference where on stage a group of all male, white, middle class type designers stood before the audience for the finale. Now, don’t get us wrong, we have great admiration for these amazing guys, but the event did prompt us to ask: where are the women?

Shortly thereafter, Neville Brody and Jon Wozencroft asked us to contribute to FUSE - the experimental digital typography magazine - for an issue on the theme of ‘Propaganda’. We couldn’t refuse. This was an opportunity to raise awareness about women working in the profession whilst also critically engaging through an experimental typeface with the language used by, for, and against women. We named the typeface ‘Pussy Galore’ after the fabulous character played by Honor Blackman in the James Bond film Goldfinger. ‘Pussy Galore’ was created by the founding members of WD+RU: Liz McQuiston, Siân Cook and Teal Triggs. 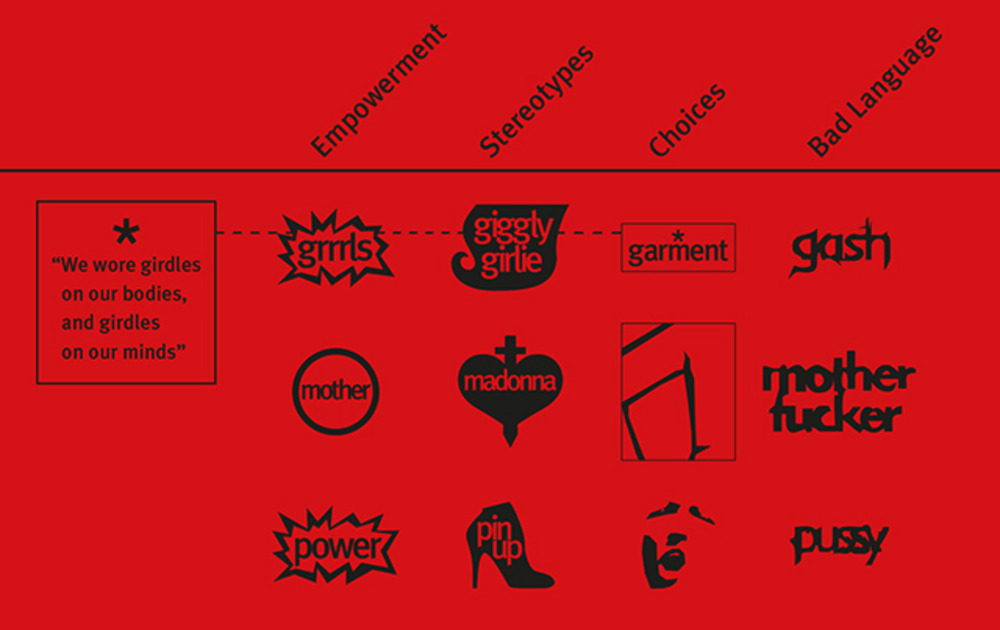 What were your original aims and objectives?
Our main aim has always been to raise awareness about women working in the field of visual communication. When we first got together, we produced an information pack setting out our aspirations for the group. We consider ourselves primarily as educational activists and hoped that WD+RU would provide a platform where people could feel empowered and contribute to an emerging discourse on design and feminism. Our strategy has centered mainly on creating spaces for conversations to take place whether through the delivery of lectures, seminars, and workshops, or from taking on research projects to explore specific issues around women and their relationship to craft and design. We also write about the subject for the design publications and more recently, the use of social media platforms has enabled us to disseminate awareness to a broader audience.

Can you describe your highlights from the past twenty-one years?
We’ve just set up a WD+RU archive site as a way of helping us look back over the last twenty-one years and make some sense out of what we have achieved. It’s been a great exercise as we can now identify more clearly the main themes of our practice and the ways in which we have used our skills to promote women in design.

Perhaps our overarching achievement has been the plethora of conversations we have had with students and professionals about the subject. We’ve found ourselves collaborating with both women and men in facilitating different kinds of platforms, which has been an enriching experience. One key highlight was a research collaboration called Handing Down The Memory Cloth (2006) where we set out to explore the role of craft with women who lived in multicultural communities of South London. We worked with students and staff from London College of Communication as well as women from the local community groups in the production of an exhibition, catalogue and activity day event that celebrated the different cultural traditions of craft production.

One flattering experience was being asked to participate in a major group exhibition held at the Centre Pompidou (2009-2011) titled Elles@centrepompidou: women artists in the collection of the musée national d’art moderne, centre de création industrielle. The French design historian Catherine de Smet wrote a wonderful piece about our work for the exhibition’s accompanying catalogue, which introduced Pussy Galore to a new generation of designers. We are really proud to have the original drawings for the conceptual typeface now in the Centre’s permanent collection. 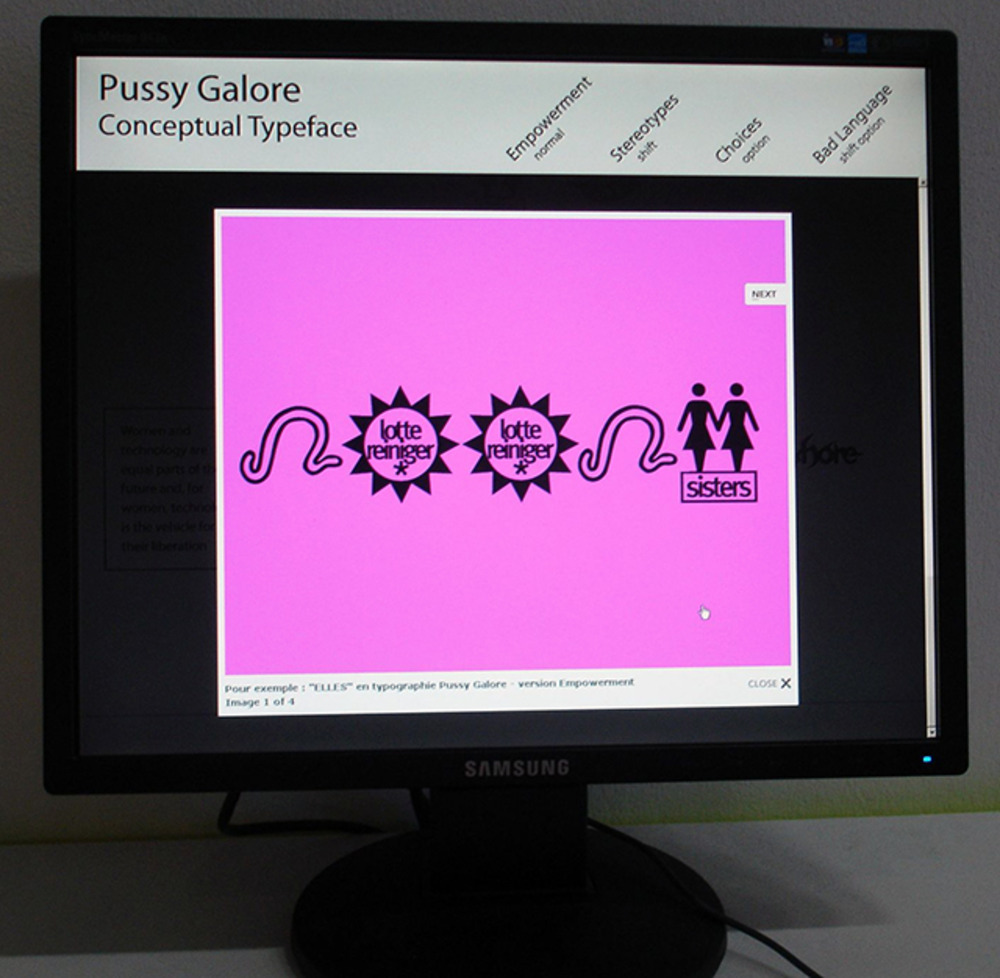 What (if anything) has changed for women working in graphic design now?
We do feel that things have changed for the better for women in the UK. However, much of it is through anecdotal evidence. We’d love to do more systematic research and gain actual evidence for evaluating whether or not there has been an increase in women running their own studios and about how women graduates are entering the profession as a first destination. In other parts of the world, attitudes toward women in design are at various different stages. In the US, for example, there has always been greater visibility, especially in design education. The recent work of the AIGA’s Women’s Leadership Initiative is a great start in empowering women designers within the profession. Could there be a similar initiative here through professional bodies like the DA&D, for example?

There’s been a lot of discussion recently about the high number of women studying graphic design compared to the relatively low number of practising women graphic designers, what’s your take on this?
A disconnect has always existed in education between the higher percentage of women studying graphic design and the number that end up as graduates within the profession. It is a phenomenon that is difficult to unpack because external social, political, economic and cultural factors are continually informing the reasons why women make certain career choices. For example, women step out of careers to have children, non-hierarchical studios and business structures preclude women from entering easily back into the workplace, or women shift their focus and enter into other professions such as education.

Siân is currently involved in a small project keeping record of 22 recent graduates from the BA course at LCC and tracking where the female students are employed. Teal has begun a similar process at the RCA through the alumni data collected from the recent exhibition GraphicsRCA. Even though both are small samples, we hope this might reveal a few directions to inform a more substantial study. 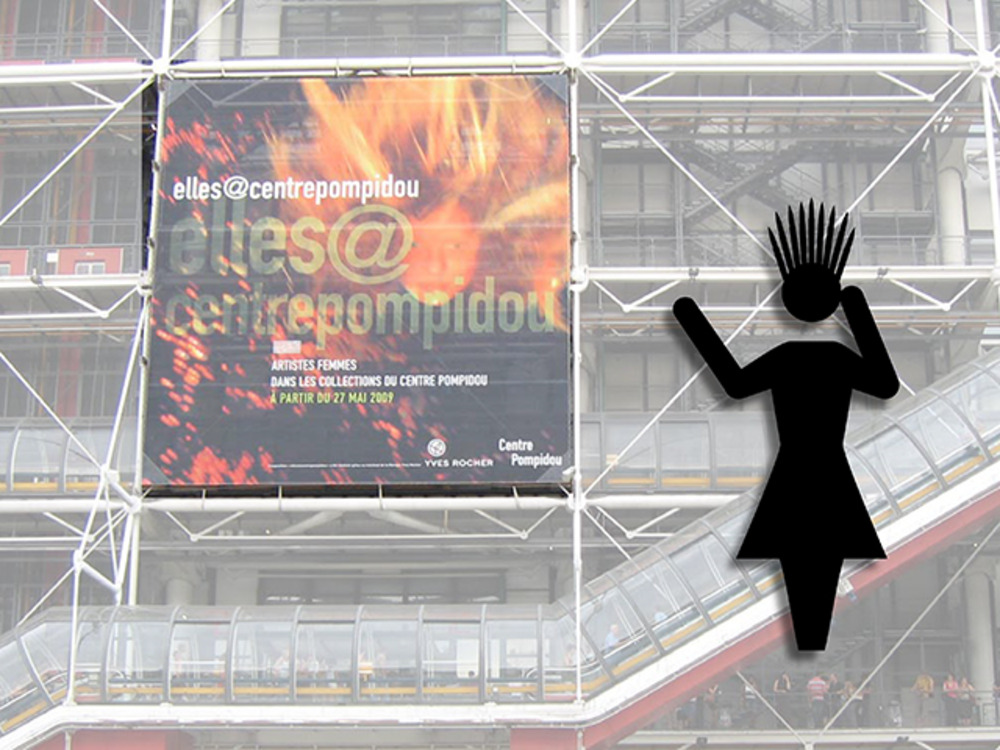 Do you think women designers need to make more of an effort to be more visible and make their voices heard within the media?
We’d like to rephrase the question: Why should women designers be the ones making the effort in getting their voices heard? We have found over the years that the media generally has been somewhat complacent in seeking out and recognizing women working in design. For whatever reason, there is always a reliance on picking up on designers who have already gained press coverage [usually men] rather than exploring more innovative avenues to make women and their work more visible. We love what the American designer Tori Hinn has been doing in providing an useful resource celebrating ‘Women of Graphic Design’ [womenofgraphicdesign.org]. The site emerged out of her Degree Project at RISD and is dedicated to exhibiting work by women in the field.

We did a 48-Hour Twitter Challenge in collaboration with Tori as part of International Women’s Day 2014, in order to highlight how women in design have inspired change. We also hope that women are becoming more confident in accepting opportunities to speak at design conferences or for events sponsored by professional bodies. In the past there has been some reluctance for women (and some men) to take the stage, because it is often seen as self-aggrandizement. Featuring your own work certainly doesn’t have to be framed as such; we should celebrate the profession’s diverse voices.

What’s next for WD+RU? How can people get involved?
As part of our 21st birthday celebrations we are holding a networking event for invited friends of WD+RU to reconsider what they might be able to do as individuals in promoting or facilitating awareness about women working in visual communication. In the spirit of WD+RU taking action, we are asking people to design an A6 format postcard responding to the following statement: ‘If I could take one action toward raising awareness about women working in visual communication, it would be....’

We will be featuring the designed outcomes on Twitter as a way of expanding the reach of our network and importantly, share in our recognition and celebration of women working in visual communication. We feel that WD+RU still has a role to play in the design community. 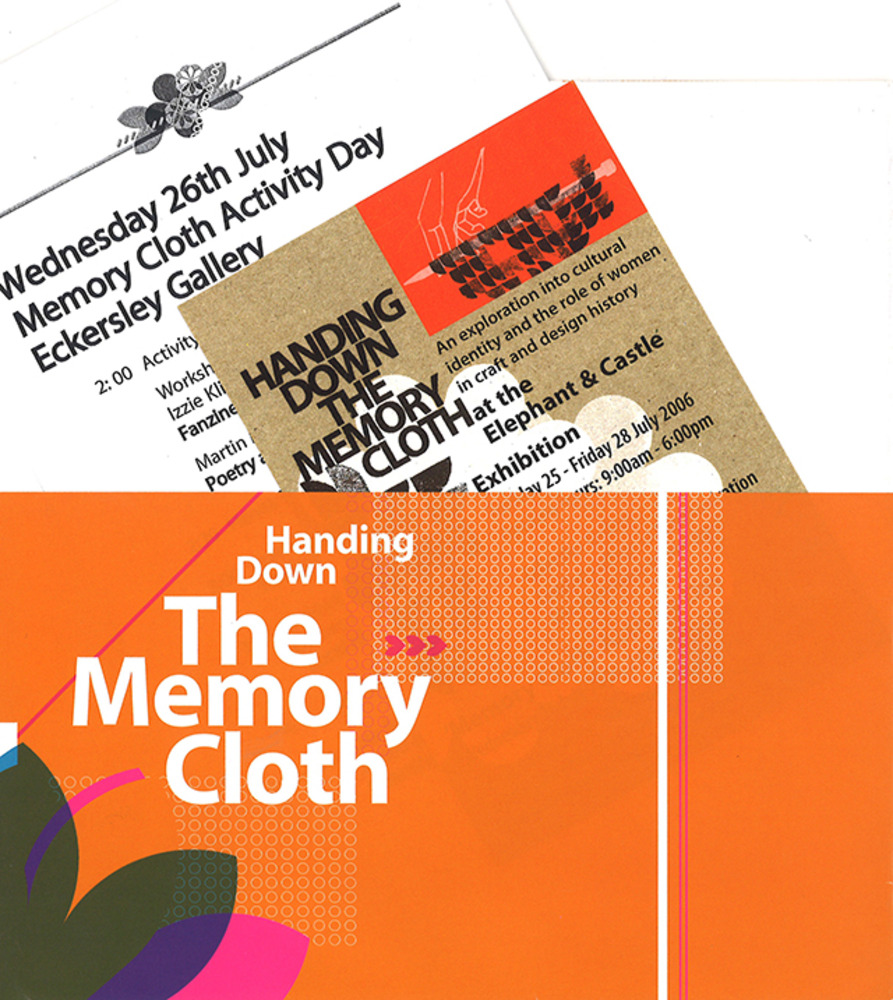 Handing Down The Memory Cloth, 2006