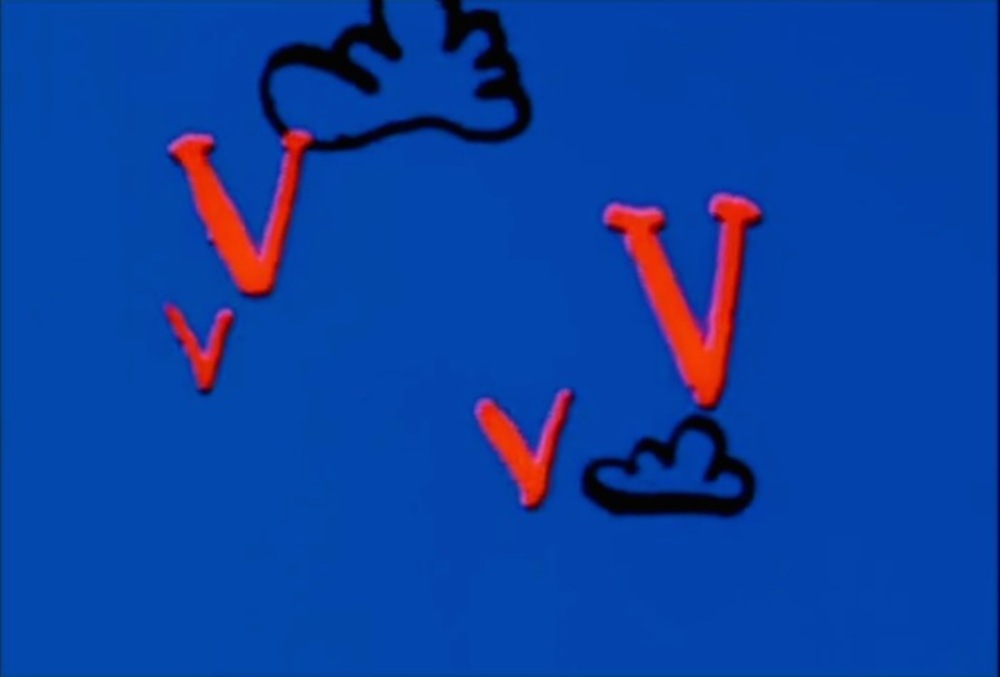 Still from Everything from A to Z (commercial for Zellers) by Leo Burnett, 2007

It was primarily in the period prior to the introduction of sound film that, in advertising strategy, integrating the name and the manufacturer of the advertised product (and maybe an advertising slogan in one or the other form) became all but mandatory. What a so-called audio-logo can achieve when images are combined with a familiar jingle could only be accomplished by means of writing in the age of silent film. A growing number of artists and filmmakers entered the advertising industry and produced commercials, in which writing leaves the frame of intertitles; whereas early films include writing only in-between moving images, writing is itself set in motion in more experimental ways beginning in the 1920s (motion design) – like in the avant-garde commercials of Julius Pinschewer and Guido Seeber (DE), Len Lye (GB) or Norman McLaren (CA). Whether in commercials, trailers or openers, writing creates emotion through motion and design and takes on functions no longer limited to the communication of legible information.

V for Victory | director: Norman McLaren | CA 1941 | commercial for Victory Bonds. © National Film Board of Canada from FACT on Vimeo.

V for Victory (commercial for Victory Bonds) by director, by Norman McLaren, 1941
The Second World War is the framework for the promotional film V for Victory, which Norman McLaren (1914–1987) produced for the state film authority, the National Film Board of Canada (NFB), to promote Canadian war bonds, known as Victory Bonds. McLaren presented a capital “V” as the central image. To the rhythm of a military march, the letter walks across the screen on small legs and transforms into the promotional slogan: “Come On, Canada … Buy My (Victory) Bonds.” The letter becomes the “main ‘character’” (Collins 1976), as Maynard Collins of the Canadian Film Institute has called it, by being the only element of the cinematic representation that personifies and seems to animate its specific mode of representation and superimposition. With the letter “V” McLaren was not only promoting the product with a catchy abbreviation for Victory Bonds but also making a permanent analogy with the victory sign.

Everything from A to Z | agency: Leo Burnett | CA 2007 | commercial for Zellers. © Leo Burnett Toronto, Canada from FACT on Vimeo.

Everything from A to Z  (commercial for Zellers) by Leo Burnett, 2007
In the commercial Everything from A to Z for the Canadian department store chain Zellers, its vast product range of everyday products is arranged in the letters of an alphabetical index. Through its visualization of the material reality in language and writing, the ad invokes the relationship between the visual media of writing and images.

Trade Tattoo (commercial for GPO) by Len Lye, 1937
In contrast to many of Len Lye’s other films, Trade Tattoo derived crucial visual inspiration from combining real images from found footage (discarded black-and-white documentary footage by the directors Robert J. Flaherty, Harry Watt, Basil Wright, and Stuart Legg) that had been defamiliarized through tinting or overexposure with collaged drawings and writing. The various real images of means of transportation − such as trains, ships, and planes or of workers sorting letters and loading mail − are made increasingly specific over the course of the film by means of numerous uses of superimposed texts (e.g., “by the power of correspondence”) and the animated pictogram of an envelope used as a leitmotif. Only at the end of the film does the appearance of the promotional message make it clear that the avant-garde image sequences constitute a promotional film for the post office: “you must post early to keep in rhythm … post early before 2 pm.” All of the keywords and slogans were set by Lye between the images in various typefaces, colours, sizes, heights, and rhythmic movements synchronised with music. Anticipating the extremely rapid cuts familiar from today’s music videos, advertisements and television trailers, Trade Tattoo featured very fast flashes of text (1/24 secs.) that can scarcely be deciphered, but which, in combination with the abstract patterns, contribute to the overall pulsating impression of the film. With the diversity of the images shown, the rapid cuts, and the many contrasts of writing and image, drawing and real photographs, both color and black-and-white, Lye manages to present the British postal service as a dynamic, flexible, efficient, and modern institution.

This November, FACT is pleased to present the UK premiere of Type Motion, an exhibition featuring over two hundred outstanding examples of text and typography as used alongside the moving image. The exhibition celebrates the creative possibilities of using text beyond the context of print; it seeks to showcase both the importance of writing as well as the ways it can achieve entirely new modes of expression with the addition of movement.