Under the moniker RUN, artist Giacomo Bufarini has built up a reputation in the world of street art equal in size to his storey-high paintings. But for his new book Parabola Di G and an accompanying installation at Howard Griffin Gallery in Shoreditch, Bufarini has swapped giant urban canvases for something more intimate, challenging himself to translate his distinctive characters into a narrative-based artworks. Not only is the setting different, but its also the first time Bufarini has exhibited under his own name. With reams of paper, a roller, black ink and a team of assistants, Bufarini has transformed the gallery space into an immersive piece, moving the graphic novel, its protagonists and landscapes off the page and into three-dimensions. Grafik visited Bufarini while the paint was still wet to find out more about the show’s construction.

How does this show differ to those you’ve worked on before?
This is only my second solo show so I'm pretty new to galleries, even though I've been working in the arts since 2001. Using my own name has helped launch me as a new artist, as no-one has heard of Giacomo Bufarini. It's the first time that I've created an installation of this scale with paper, although in 2004 I worked on a project in Turin called Kindergarten because we wrapped a gallery space in paper and painted every centimetre just like we were children. The idea behind this exhibition was to represent the environment of the book, Parabola Di G. The narrative follows the journey of a character called G through different landscapes. Thematically, it deals a lot with life and birth, and the good and bad in civilisation.

Is Gi a version of yourself?
Yes, definitely. The narrative is partly fictional and partly autobiographical. The book is personal but not in that it talks about my feelings – that would have been too selfish – it is more about different stages of my life. Birth is a theme that comes up a lot, which is partly because in less than a month, I'm going to become a father. I was unsure as to whether to use something so personal, but it’s such a huge change that I would have felt as though my hands were tied if I didn’t express it.

Tell me a little bit about the process of creating the installation.
A lot of it has been quite freestyle. We planned it out a little bit at the beginning, but as we worked there were a lot of things that we had to change and reinvent. The basic idea was to create a pop-up book that you can immerse yourself in. In some respects, the story of Parabola Di G is repeated three times: once in the book, then in the framed pieces and then finally on the walls. The latter is much more freehand and a looser interpretation of the story. I used just one painting tool, a 5cm-wide roller that costs about fifty pence. It also features a lot in the narrative. I've only really discovered painting in this way this year but I’ve been using it pretty heavily over the past six months.

Many of your graffiti pieces are huge, storeys-high even. Are there different challenges to creating small-scale illustrations for a book?
The challenge has been more to do with timings, in terms of getting everything ready for the show and publisher on deadline. Working at a small scale is something that I've always done. Even my larger works start from a drawing on paper. With the installation, the tricky part has been understanding how the paper structures work and developing the feeling of being inside the installation. It's like a sculpture in relief as the viewers are exploring it from the inside. I wanted all the elements in the show to be balanced and have the same importance. Of course there is a focus – the large Monkey Temple at the back of the gallery is the largest three-dimensional element – but it's important for it to all work as a whole.

When street artists start exhibiting in galleries it often provokes negative comments from that community and beyond. Why do you think it bothers so people so much?
Other people may label me as a street artist but I'm free. I have been drawing since I remember and I've been painting on walls for many years too, yes, following some currents like graffiti and street art. My work is always centred around doing something new, something that challenges me and something that encourages other people to step from one place to another because they want to discover something. If you keep doing the same thing, it doesn't make you happy, especially when in reality, your personality and interests are constantly changing. It's important to adapt. 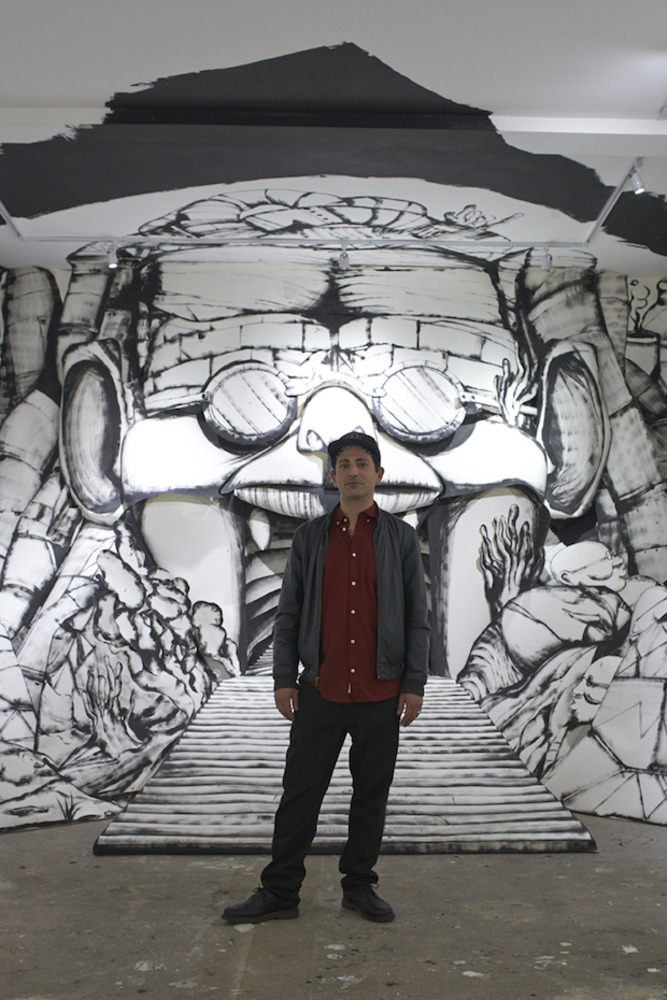