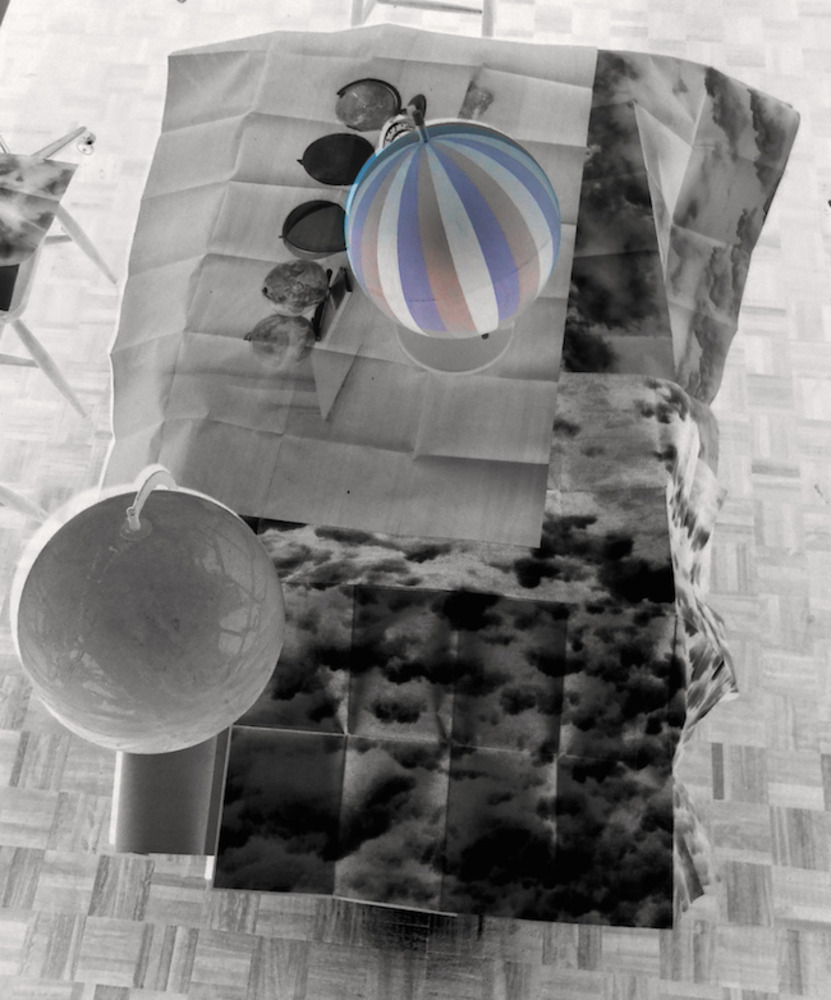 “In the Deserts of the West, still today, there are Tattered Ruins of that Map, inhabited by Animals and Beggars; in all the Land there is no other Relic of the Disciplines of Geography.” So reads the final line of Jorge Luis Borges’ short story, On Exactitude in Science, though whether a sentence that constitutes a quarter of the volume of the entire work should be described as final is open for debate. The story’s brevity is relevant though: in it Borges relates the tale of a mythical empire in which the art of cartography has achieved such accuracy that its maps have become one-to-one scale with the territories that they record. Borges’ story has itself become the final line on mapping and the representation of nature at a macro scale in the digital era; it is invariably the reference that the commentariat turn to in order to inject some lyrical expansion into articles about our reliance on computer-based mapping systems and GPS satellite networks. We now exist almost exclusively on and in mediated images of the earth.

The current show hosted at the Camberwell College of Art project space, against Nature, addresses exactly this dilemma, except in this instance there is something of a role reversal. In Borges’ telling, the map exists only in scraps because later generations lost interest in the cartographic arts, leaving the simulacrum to whither. For us, the map has not withdrawn but become so pervasive and so immaterial as to have disappeared from view — as such, the cartographic arts have fallen from focus too, subsumed under a scheme of blank empiricism. We no longer have maps, but the map, in all its finality. The artists in against Nature are more than happy to be beggars and animals, safe in the belief that there is no exactitude in science and that geography has always been a means of interpretation. The discipline’s mode of subjectivity, as the curator Finlay Taylor notes, is the “geo-graphic”, here set out over a series of artistic experiments that explore the relationship between the medium of print and the recording of nature. 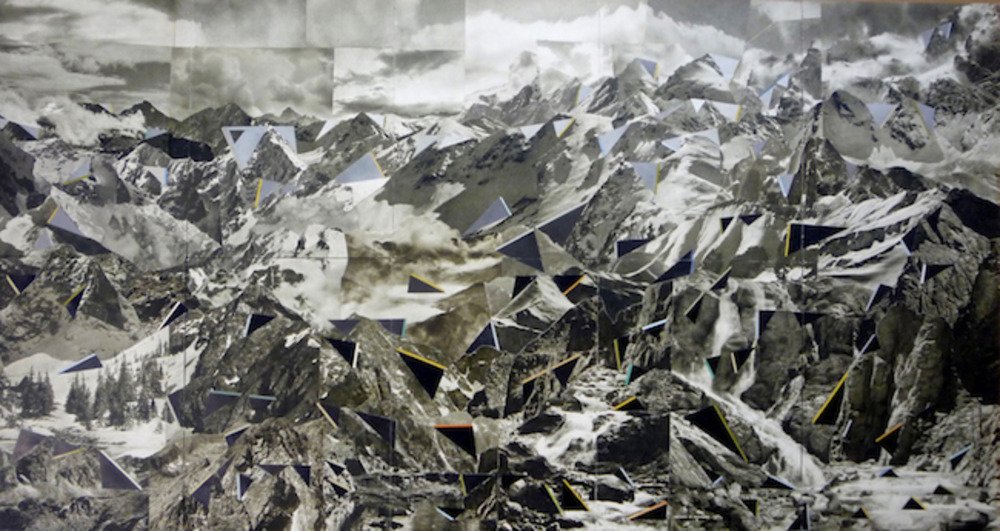 For instance, the artist Mark Harris has contributed Continuous movement – range 2 (2011), part of an ongoing series of works originally inspired by the radical Italian architecture group Superstudio’s Continuous Monument works. These were collaged images of a seemingly endless glass and steel superstructure, a homogenising and anonymising vector that treated the urban and the wild with similar disdain. Harris has commented on his interest in the “journey of printed matter, from the commercial to the unique and re-appropriation back to the multiple.” Here his collage approaches a form of realism — rather than fracturing the image in the manner most common to such cut-and-paste techniques, it is as if he is in the process of constructing the landscape for the first time.

The Future (2012), by Bob Mathews, places more store in the surreal. A trellis of bamboo poles, dipped an acerbic red, lean against three tie-dyed sheets. Each of these hangings has an orb-like, perhaps even lunar, focal point, the familiar result of any attempt at resist-dying. Against this celestial ground the frame takes on the aspect of some hellish dream-catcher or Wiccan symbol, not an unusual gesture for an artist long-fascinated by countercultures and alternative societies. Such groups often claim a more holistic understanding of nature than that espoused by the scientific community, one that records knowledge at levels immeasurably more subtle than those reached by either an orbiting high definition camera or a scanning electron microscope. 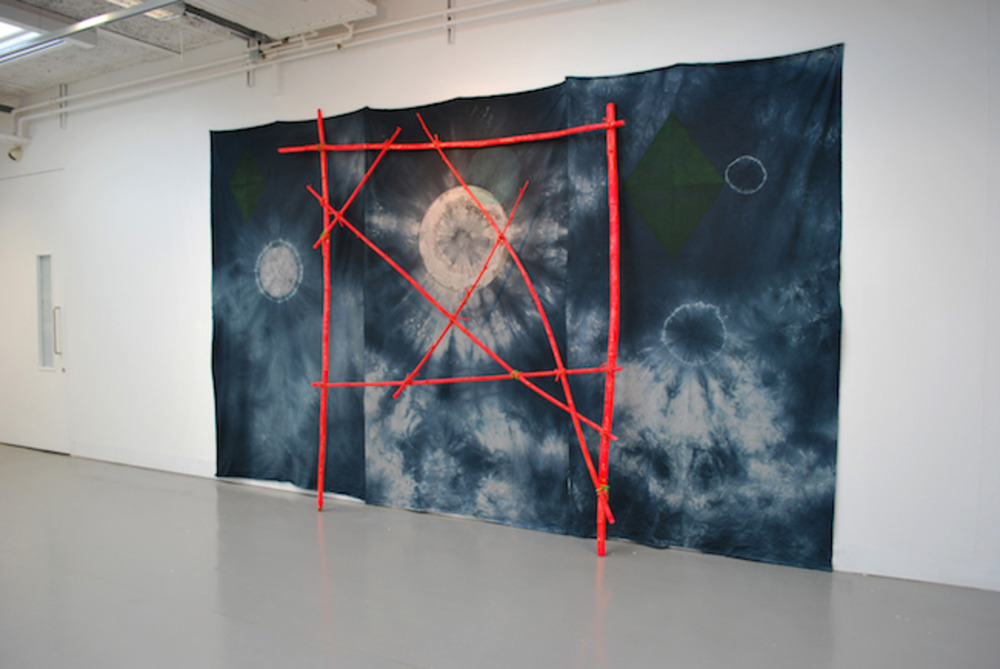 If Mathews is borrowing from avowedly non-mainstream traditions in his turn towards nature, it remains, at least colonially, Western. Rebecca Salter, however, is escaping the Occident altogether, drawing on her first-hand experience of Japan’s particular aesthetic sensibilities as well as its historical sensitivity to the environment. Salter has a developed understanding of the crafts particular to that country, of calligraphy and woodblock, skills that draw poetic emphasis from their apparent technical simplicity — a mood the Japanese refer to as “wabi”, both austere and transient. Salter is of course herself transient, a British artist traveling between borders: in works such as Into the Light of Things 1 (2010) she doubles back in order to inflect those Eastern philosophical concepts with more familiar theories, the matter-of-factness of minimalism, say, testing the limit between the dumbness of objects and the sweet entropy of an expanding universe. She swivels once again in her decision to mark her scene on traditional Japanese paper by using a digital printing method. 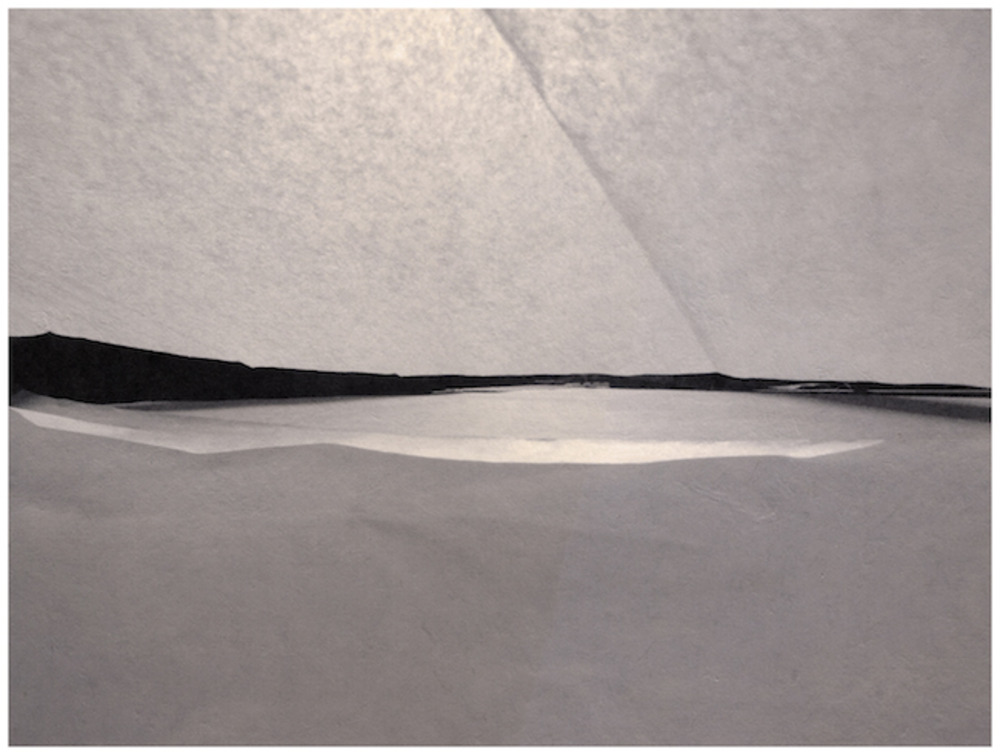 Like many of the best pieces included in against Nature, Salter is exercised by a contemporary tendency to lose the horizon line, as Nicky Coutts puts it in the pamphlet that accompanies the exhibition, a state which “acts as catalyst for addressing where we stand both metaphorically and physically in a world of multiples.” We are all now afflicted by multiplicity, but not all technologies of reproduction are equivalent, a statement supported, if lightly, by this collection of printed objects. There is a lot to be said for beggars and animals.