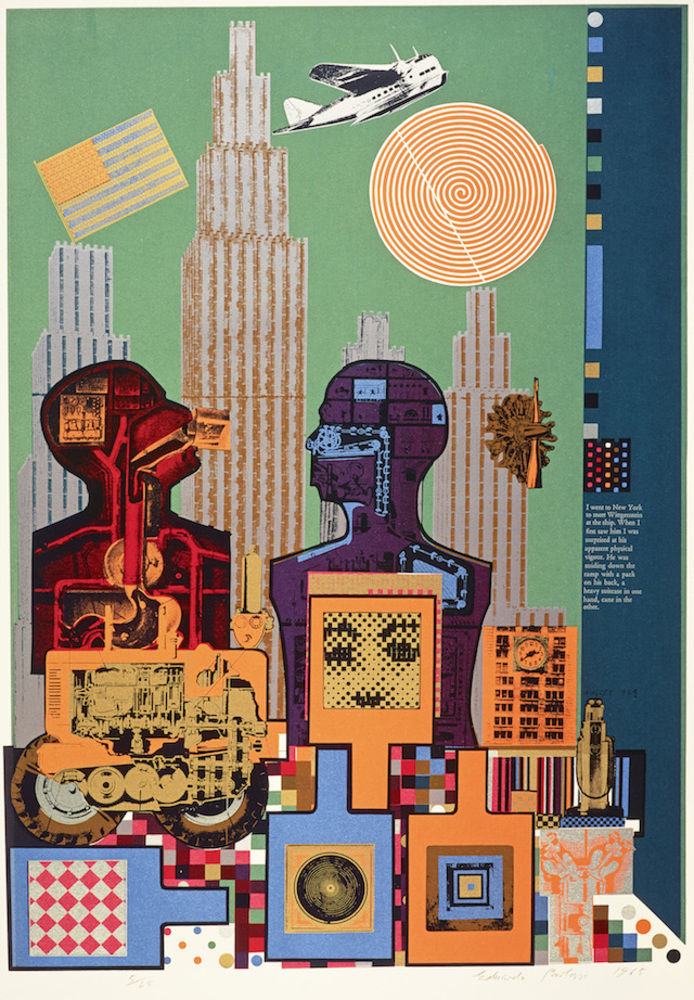 Wittgenstein in New York (from the As is When portfolio), 1965, Screenprint. Courtesy Scottish National Gallery of Modern Art © Trustees of the Paolozzi Foundation, licensed by DACS

At the ICA in London in 1952, at the inaugural meeting of the Independent Group, Eduardo Paolozzi projected a wordless salvo of collaged images, scrapbook cuttings, pasted papers and pop-culture ephemera to a somewhat baffled audience of his peers. Though that audience may not have known quite what to make of it at the time, Paolozzi’s free-form collage-in-motion—retrospectively dubbed ‘the Bunk lecture’—would eventually be heralded as an early precursor to Pop Art, and his name inextricably tied to the movement.

The Independent Group, which shares Paolozzi’s association with the birth of Pop Art, was born out of a desire amongst its members to distance themselves from prevailing attitudes towards contemporary art at the ICA. The group engaged in collaborative practice throughout the 1950s and early 60s, and are recognised in particular for their contribution to the seminal 1956 exhibition This Is Tomorrow, held at the Whitechapel Gallery. Twelve numbered groups of artists, architects, designers, musicians and writers—many of whom were Independent Group members—created exhibits setting out their vision for contemporary art. Paolozzi, Nigel Henderson and Alison and Peter Smithson formed Group 6, presenting a three-sided pavilion strewn with found and junk-y objects. The foursome appear on a poster advertising the show, in a photo taken in the middle of a London street. Henderson and the Smithsons are seated, Paolozzi standing behind: an imposing presence. 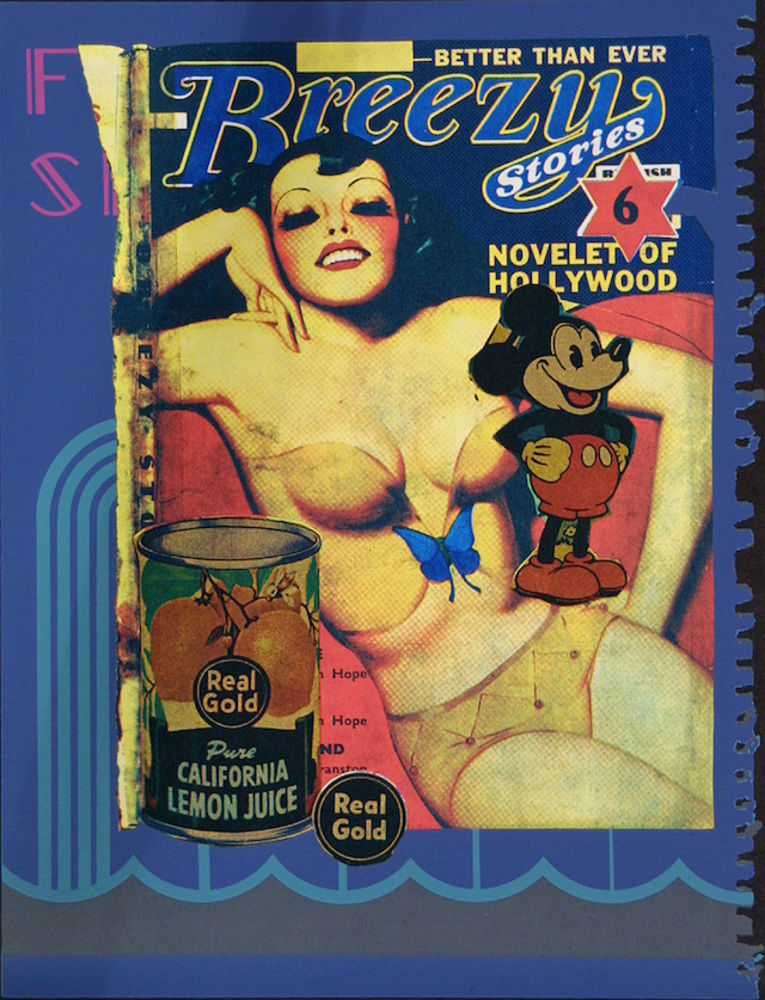 With this in mind, the Whitechapel Gallery offers an appropriate venue for the first retrospective of Paolozzi’s work to be held in London since 1971. Interest in the artist’s work seems to have increased in recent years, with exhibitions at Pallant House Gallery in 2013 and Yorkshire Sculpture Park in 2016, as well as an exploration of the output of Hammer Prints, his collaborative venture with Nigel Henderson, at Firstsite in 2012. This latest exhibition sets out to display the breadth of Paolozzi’s practice over the full course of his career, and spans five decades’ worth of work. 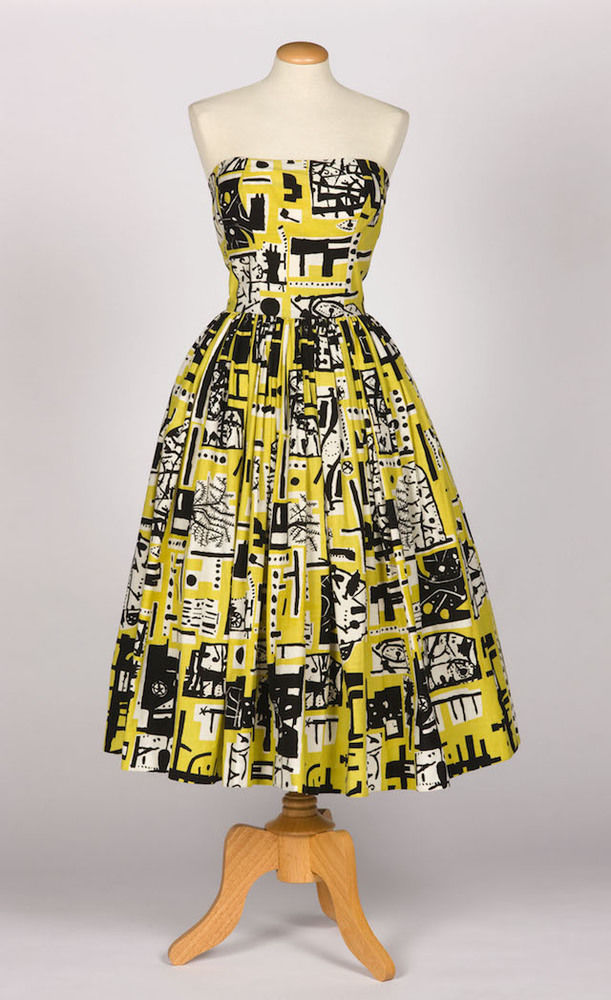 The exhibition is a cabinet of visual curiosities: brutalist concrete sculpture is juxtaposed with a slideshow of proto-Pop Art collages from the Bunk lecture, and a towering metal figure stands next to the nipped silhouette of a 1953 Horrockses dress, cut from patterned fabric designed for the ICA exhibition Painting into Textiles. The exhibition traces Paolozzi’s career chronologically, beginning with the cubist-influenced drawing and sculpture he created during his stay in Paris shortly after the war. From here on out, the works displayed in the ground floor galleries document Paolozzi’s output on his return to London, and the collaborative work he created both with Nigel Henderson and with the Independent Group.

Towards the end of this first section of the show, the importance of Paolozzi’s contribution to graphic art, as we know it today, becomes clear. During the 1950s and 60s he began experimenting with screen-printing, both through Hammer Prints—an applied-art venture with Henderson, in which they created patterned textiles, wallpapers and products for the home—and in his more widely-known print portfolios, among them the Wittgenstein-inspired As Is When (1965), and General Dynamic F.U.N. (1965-70). The former series spans a wall at the back of the ground floor gallery; its stunning, rhythmic arrangements of colour and form explode out at the viewer. Paolozzi’s prints throw the tendency towards postmodern pastiche within current illustration and graphic art into sharp relief. Much of his mid-career work in this medium still looks strikingly current. 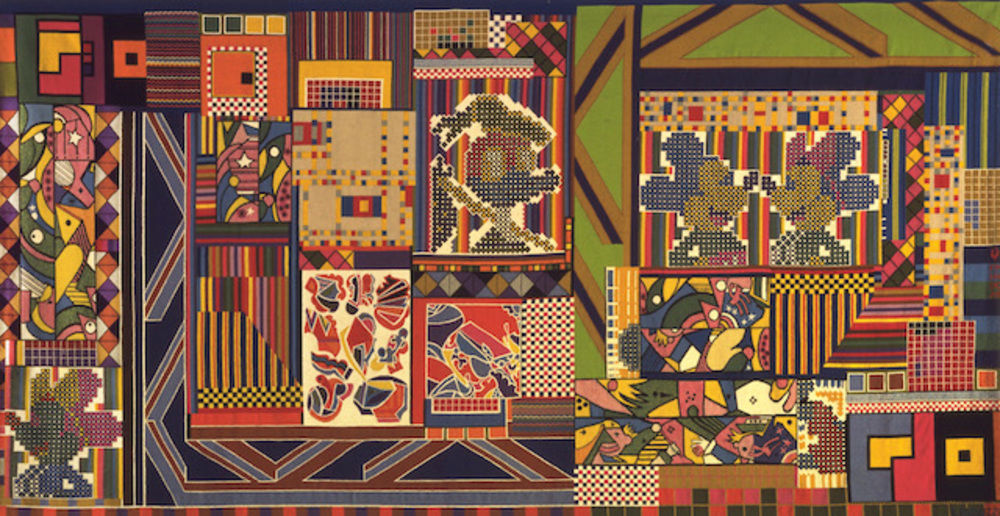 The Whitworth Tapestry, 1967. Wool, Linen and Terylene. Courtesy The Whitworth, University of Manchester © Trustees of the Paolozzi Foundation, licensed by DACS

Upstairs, the first gallery has been decked out in dark paint and chrome-lined display cases, in homage to Paolozzi’s contribution to the Scottish Arts Council’s 1983 exhibition Out of this World. Within, the screen print series Universal Electronic Vacuum glitters in the low light, accompanied outside the case by Diana as an Engine I, a loosely figurative amalgamation of enamel-coated mechanical parts. At this point in his career, Paolozzi had spent time in California as a visiting professor at the University of Berkeley, and had also struck up a friendship with the writer J G Ballard. Both experiences seem to have influenced the exaggerated use of geometric forms and machine-like emblems within these works. 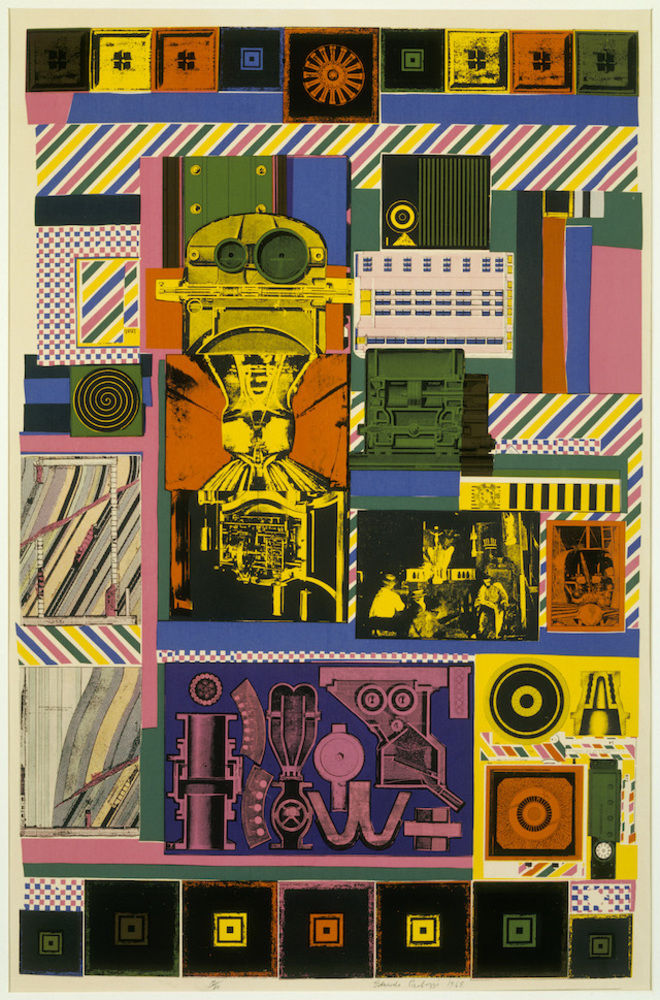 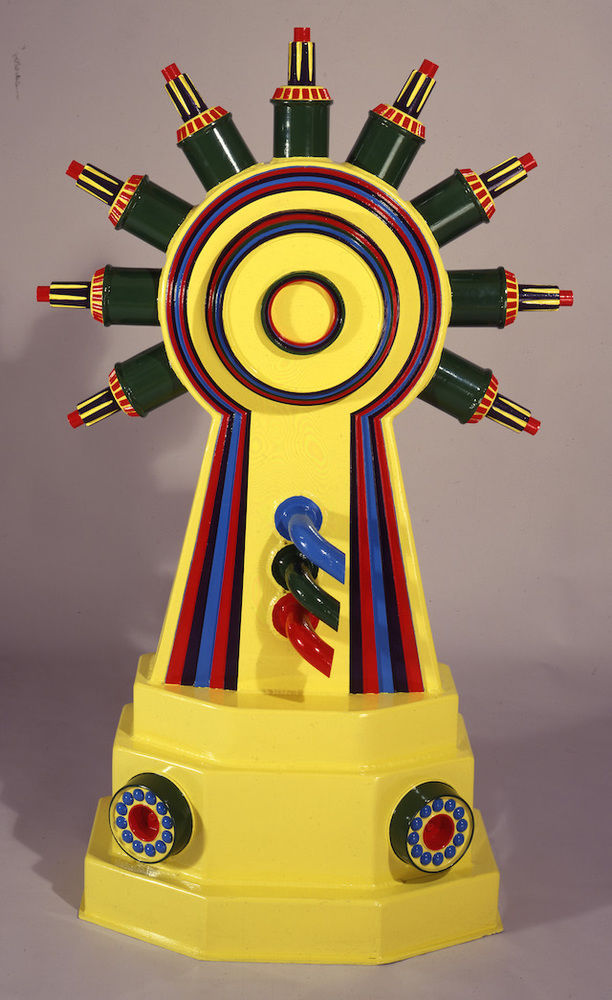 It’s unfortunate, in light of what we’ve seen up to this point, that in its final rooms the exhibition loses some of its vitality. This section of the show focuses on the later years of Paolozzi’s career, and though the works still display some similar visual tropes to those from previous decades, their presentation in a more formal, sparse setting tones them down. Perhaps this is the curators’ way of signifying a sense of maturity, at a point in his career when Paolozzi had a knighthood and a membership at the Royal Academy under his belt. The 1980s and 90s were also the period in which Paolozzi returned to figurative sculpture, though these later efforts seem less consistently successful than in his earlier work. 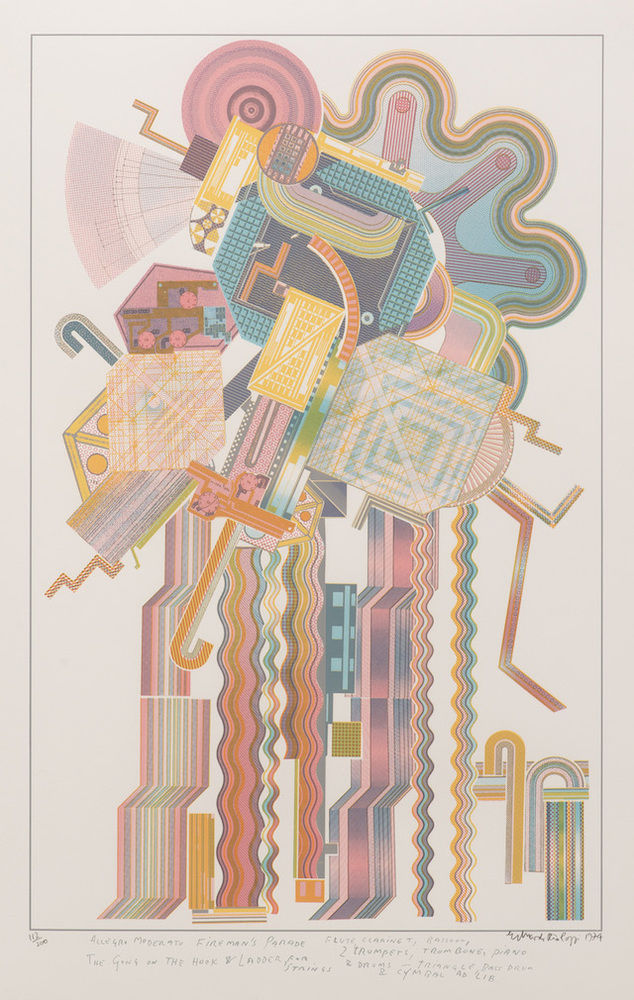 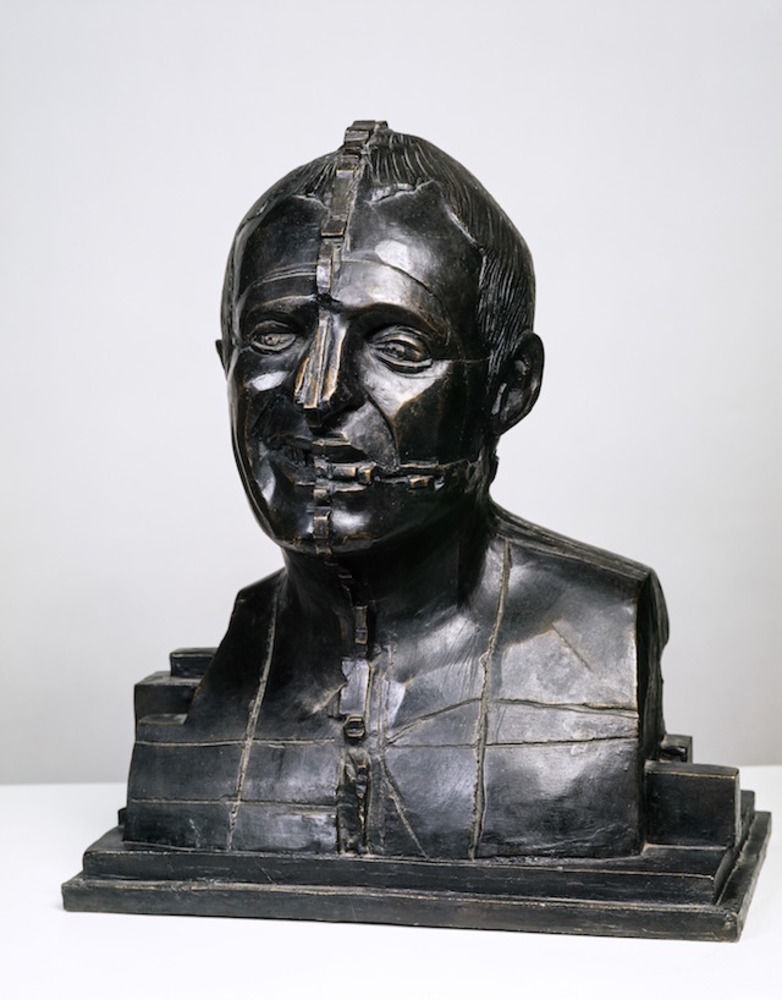 Because of Bunk, Paolozzi’s name remains inextricably connected to Pop Art. The overriding impression left by this latest retrospective, however, is of an immensely versatile and visually curious artist, whose work segues into many of the twentieth century’s most distinctive movements. Characteristics of surrealism, cubism, art brut and abstract expressionism are all evident within his oeuvre, as well as pop, though none within this exhibition quite seem to dominate. Designers and artists alike can find something to take away from the works on display here; in particular, Paolozzi’s singular approach to the absorption, appropriation and remixing of mass culture, and the juxtaposition of the mechanical with the organic.

In his commentary for Paolozzi’s 1963 publication The Metallization of a Dream, fellow Independent Group member Lawrence Alloway observed that: “As is natural to somebody who grew up surrounded by the picture palaces, news-stands and bill-boards of the twentieth century city, Paolozzi’s content is the patterns of connectivity that link apparently divergent events and objects…” Ours is an increasingly image-saturated world—nowhere more obviously so than in a city like London, where the visual clamour of street signage, billboards, stickers, flyers, posters and banners and even video advertisements, both above and below ground, spill over into the personal sphere through our smartphones. One can’t help but wonder what Paolozzi himself would have made of it, and indeed what art he might have made of it, had he been at his productive prime today.