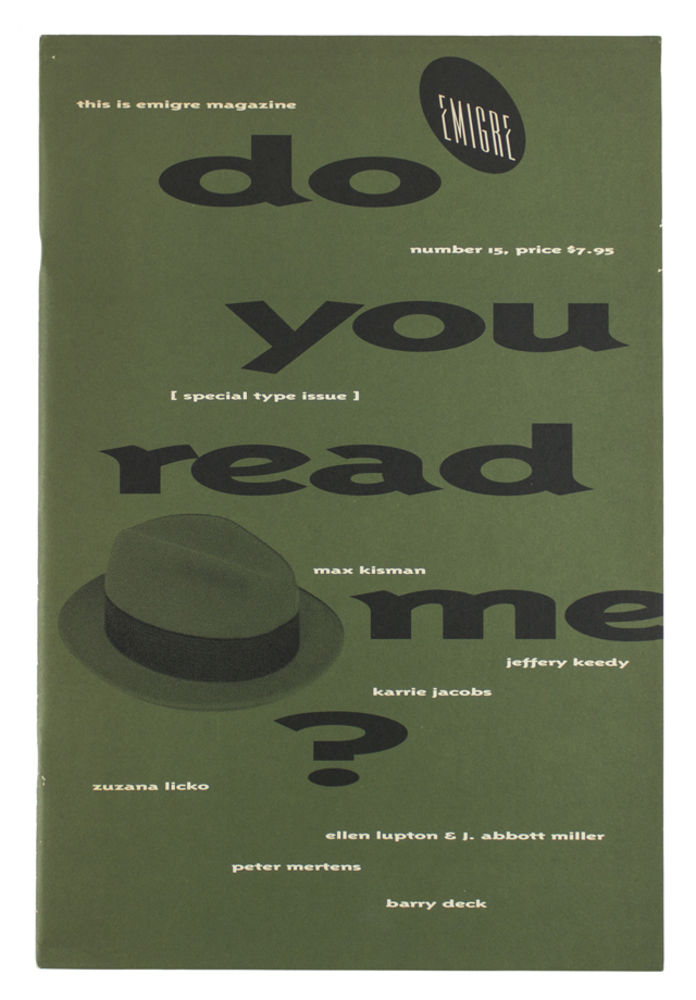 Emigre 15, 'Do you read me?', 1990. This issue, focused on new typefaces and legibility, features typeface designs and interviews with Peter Mertens, Zuzana Licko, John Downer, Jeffery Keedy and Barry Deck, among others.

During a period of rapid change within graphic design at the end of the twentieth century, Emigre magazine stood out as a bold expression of the discipline's authorial potential. Co-founded by Rudy VanderLans in 1984 and published until 2005, its 69 issues fused critical writing, experimental typography and self-publishing in formats ranging from large-format tabloid to paperback book; ambitious, influential and occasionally controversial, it became one of the most admired and significant design periodicals of its time.

A new exhibition, opening today at the University of Reading's Department of Typography and Graphic Communication, celebrates Emigre as an era-defining example of entrepreneurial design authorship, and considers its contribution to key debates surrounding the role of the designer in communication, which continue to resonate to this day. Emigre magazine: design, discourse and authorship is co-curated by Francisca Monteiro, a student of the MA Book Design programme at the University, and Rick Poynor, a professor in the Department of Typography & Graphic Communication. The exhibition draws upon both the Special Collections department at the University of Reading and Poynor's own personal collection, which also includes type specimens, Emigre Music releases and other related items.

"The exhibition seeks to show how the role of the designer in the process of communicating a message was challenged in the late 1980s and early 1990s," Monteiro explains. "The forms that authorial design practices can take, and their relevance to the field of graphic design, needs further investigation. The main objective of the exhibition is to build on the meaning of authorship in graphic design and open up the argument about the role of the designer." 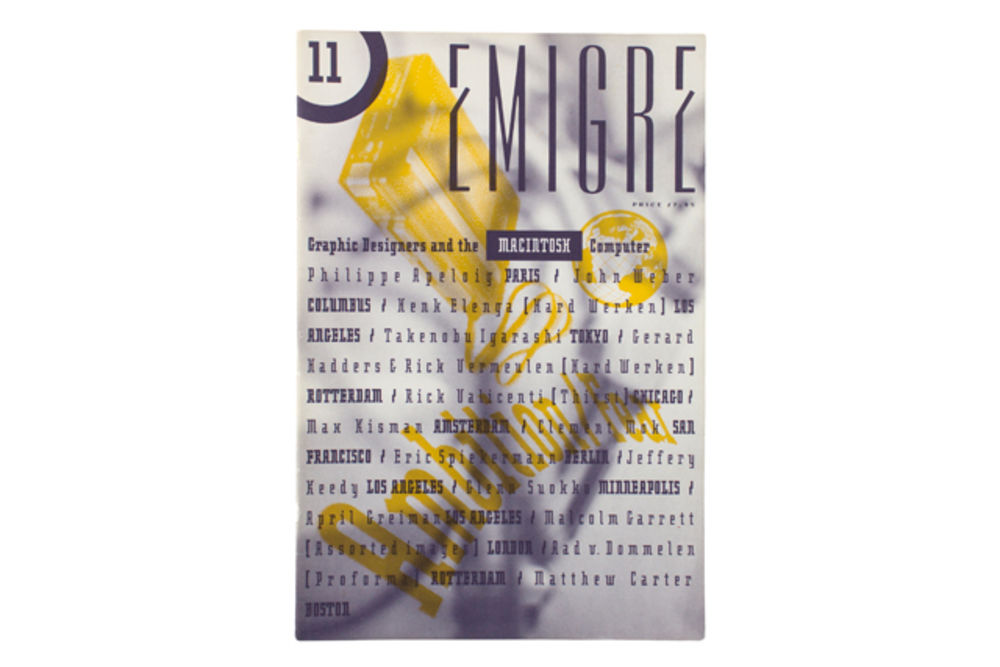 The exhibition is divided into sections, among them Rudy VanderLans as editor, The Emigre type foundry led by Zuzana Licko, and Emigre considered in context, which explore the range of Emigre's activities. "The intention of the exhibition’s sections and the artefacts—magazine covers and spreads, catalogues and brochures, CD cases, and books—was to show and stress Emigre’s layout design, typeface design and writing, and to explore Emigre Graphics as a self-sustained, entrepreneurial form of authorship," says Monteiro. "For me, the exhibition was a learning curve, because it developed at the same time that concepts of self-publishing, design discourse and what defines authorship were becoming clearer to me."

The exhibition was conceived as part of Monteiro's MA studies, and contributes to her ongoing research into design authorship. "The focus on Emigre magazine and authorial design practices came from my curiosity about the intense discussion generated in articles, exhibitions and design projects in the late 1980s and early 1990s," she explains. "These designers contested the idea of neutrality and positioned the designer as a central figure in the communication process—as an author. I am particularly interested in design authorship from a self-publishing point of view, in the way the designer-editor interrogates process and method, and in the relationship between design and writing." 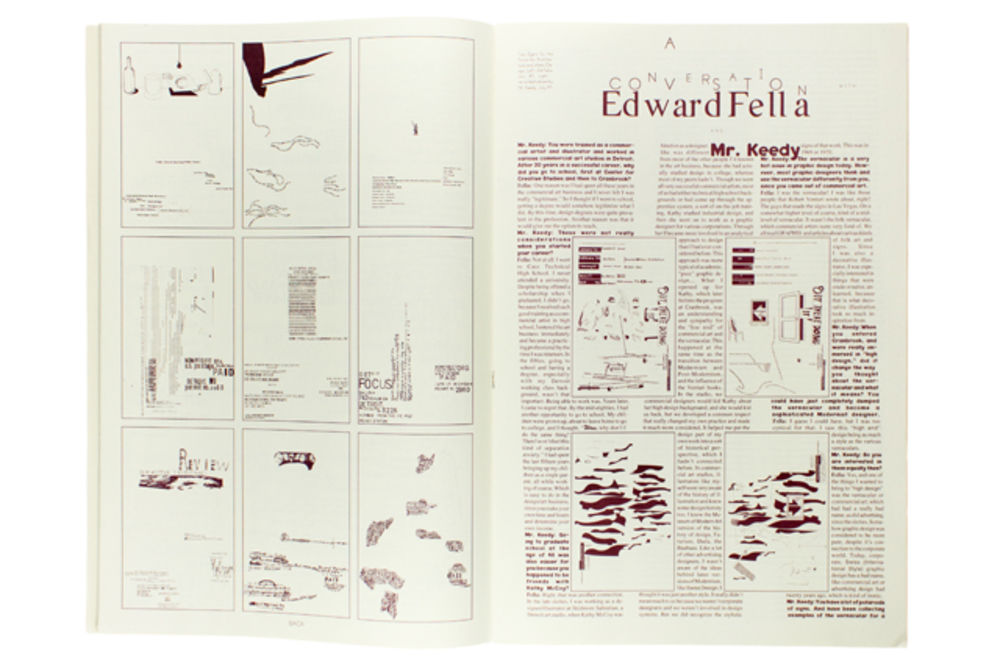 'A conversation with Edward Fella and Mr Keedy' in Emigre 17, 'Wise guys', 1991. Interview and page design by Jeffery Keedy.

"Emigre was a hugely exciting publication," says Poynor. "It was driven by ideas and by new, independent thinking and it showed some of the most adventurous experimental typefaces, layouts and design projects of the day. Emigre was a self-published zine bursting with confidence that turned into one of the pivotal design magazines of its era. It published many long interviews with designers that remain fascinating documents of how design was changing with the arrival of desktop technology. One sign of the magazine’s impact and influence was its remarkable letters pages, which were full of interesting writing by readers who just couldn’t resist responding. Looking back at Emigre is a reminder of what no-holds-barred design debate looks like. For a critical culture of design we need committed critical writing. Emigre was a brilliant example of how to make that happen." 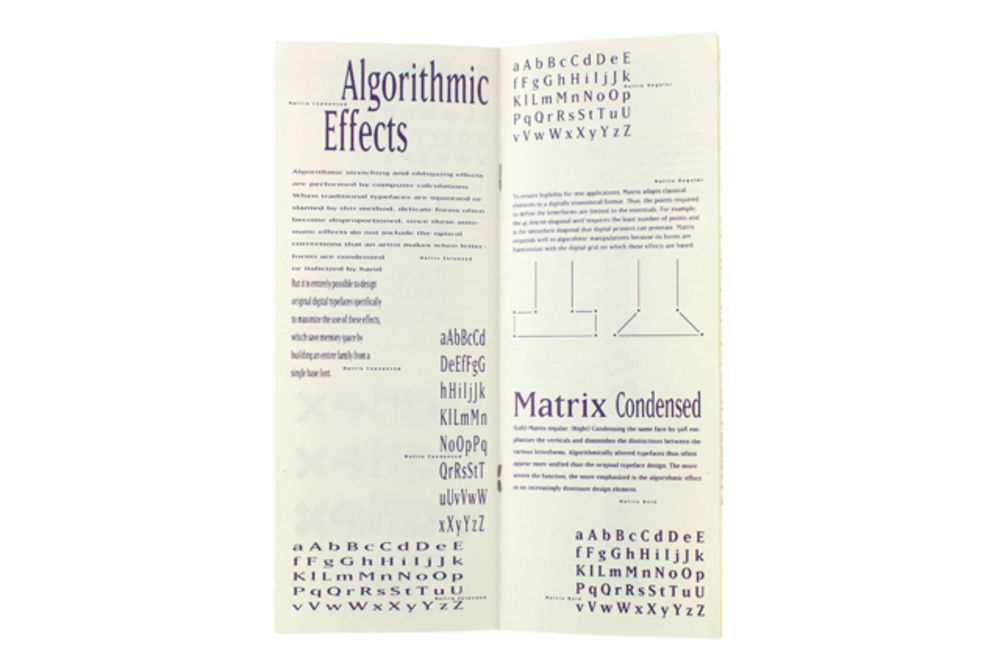 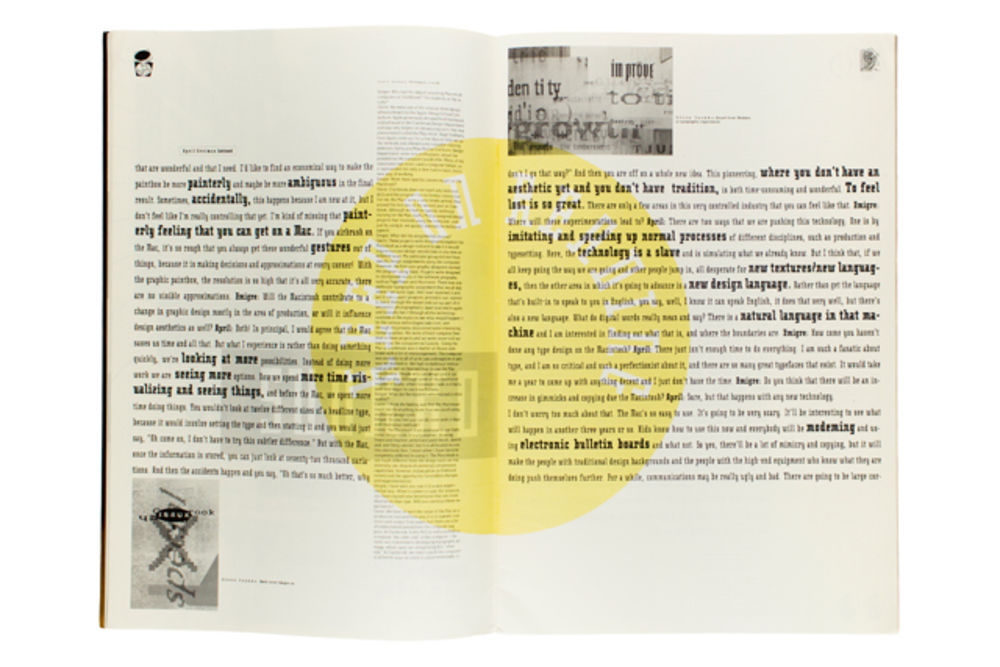 Interviews with April Greiman and Glenn Suokko in Emigre 11, 'Ambition/fear', 1989.