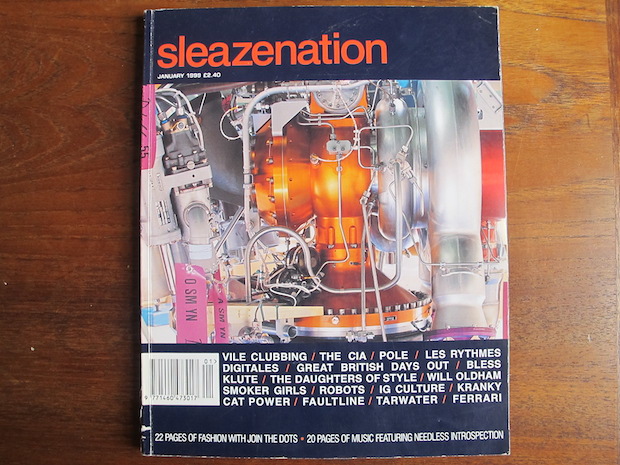 It was the late 1990s. I was on my lunch break, browsing the shelves of a local newsagent in London’s Exmouth Market, where The Face offices used to be. I quickly stopped at that cover because it looked nothing like the cover of a magazine. Then, I read the lines: ‘Vile Clubbing’, ‘Great British Days Out’, ‘The CIA’ and ‘Les Rhythmes Digitales’. No explanation, no trying hard to sell you something and no celebrities.

I had been working in publishing for about five years at that point, so I knew what a cover should look like. Even in independent publishing, where there was a greater degree of freedom than in the mainstream magazine world, there were rules to be adhered to if you wanted covers to have a favourable impact on sales. This cover didn’t follow any of these rules. There were no human beings on it, no-one smiling or making eye contact, no screaming headlines about revelations or confessions. Just a quietly confident cover with a beautiful photograph of something completely abstract. What was it, in fact? The insides of a hoover, maybe? At first, I simply didn't get it. But that’s precisely why I fell in love with it, because it made me question things. It intrigued me. Plus it treated seemingly disparate subjects such as clubbing and the CIA with equal weight.

Lately I had become a bit detached from The Face as, even though I enjoyed working there, I didn't really care for the cover stars of the time, people like Robbie Williams and Kate Moss. Sleazenation, with its promise of rubbish clubbing, with its randomness, its imperfections and its unassuming confidence, felt like home. That cover was the reason why I bought this issue but it went further than that. It also made me want to work there, so I rang them up and joined their ranks within a month.
It looked like an odd move, going from the most successful youth magazine to this much smaller magazine that put portraits of machines at the heart of its editorial but it definitely was the right move. I wasn't just working at a magazine any more, I was involved in the making of a magazine. It was at Sleazenation that I learnt the trade of how to publish an indie mag and, most importantly, how not to.

Three months later, The Face was sold to EMAP. I had escaped just in time.

London-based monthly Sleazenation was a hotbed of creativity during the ten years it was printed by Swinstead Publishing. Defined by bold art direction and documentary-style photography, it showcased London’s edgy underground, featuring reportage work by the likes of Brandy & Coke photographer Ewen Spencer. Each of its art directors (including Stephen Duffy, Richard Hart, Nick Booth and Scott King) made a distinctive mark, but the latter won the magazine several awards for his ‘Cher Guevara’ cover in February 2001, where he portrayed the singer as the revolutionary leader with the cover line ‘Militant Pop’. The magazine closed in 2003.

Since its inaugural issue in 2006, Olmedillas has run and edited Anorak, a beautifully put-together children’s magazine packed with stories and creative exercises devised by top illustrators. Now on its 31st issue, Olmedillas has also published three activity books and recently celebrated the magazine’s seven-year anniversary by bringing out The Big Book of Anorak, a bumper publication filled with all of the title’s best bits.