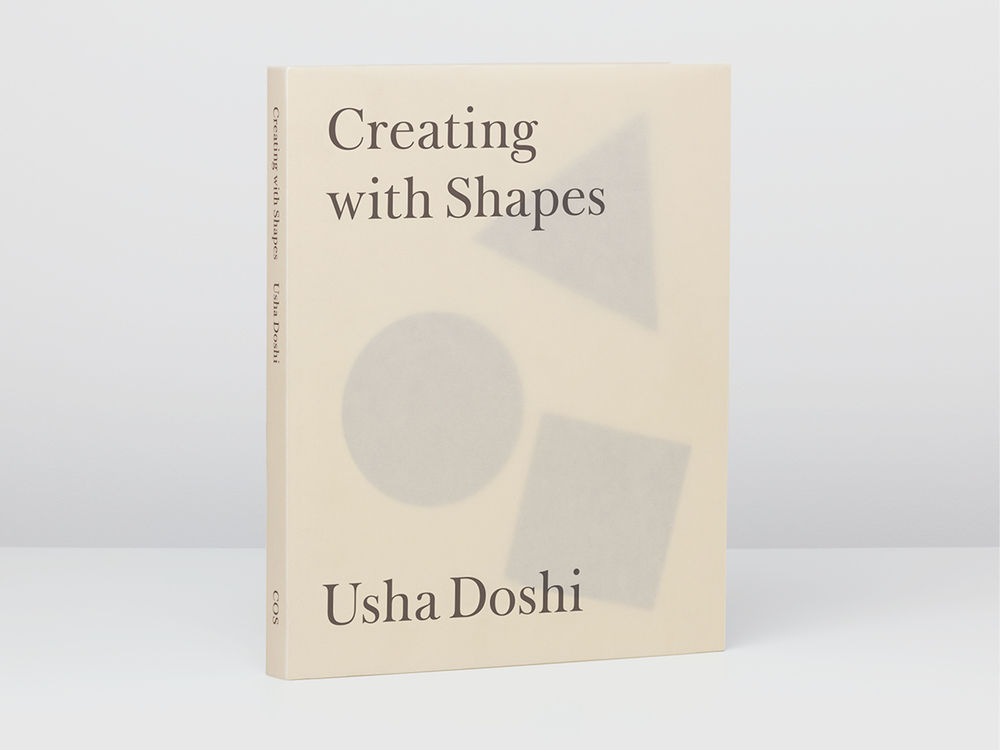 How did the project come about, and what was the brief?
The book was initiated by COS, but the idea behind it came from Usha Doshi, who is part of COS' design team. For many years Usha was senior technician for the RCA’s fashion department, and when she retired in 2007 she was approached by ex-student Karin Gustaffson, COS’ creative director, who was part of the creative team setting up the then-unknown brand. Although a Swedish-backed company, COS was founded and is still based in the UK. Usha has worked with COS ever since.
Usha has a particular skill in engineering design intent into a makable product, turning the shapes and drapes of fabric into workable patterns, and she has brought a level of detail to COS garments that is now very much part of their make-up. She is hugely experienced and kind of age-defying — I’m sure she wouldn’t mind me saying that she is in her 70s — and is testament to the fact that there are always things to learn, having happened upon a new method of forming fabric that was totally different to the rules found within conventional pattern cutting. The principle is simple (in fact, the discovery was made by accident while playing with her grandchildren) but the results can be very complex, allowing for structures in fabric that that previously seemed unachievable. It is a principle that offers endless possibilities.
It’s the kind of process you could start a fashion label from, but Usha wanted to give the process away, open source, and COS wanted to support that. Creating with Shapes is COS’s first book, and while making an object that supports craft and making sits well with their values, the overriding drive was to support Usha as a significant contributor to the brand. This was a very human story that was about a sum of experience, and a very appealing one to tell.
As is often the case, the brief evolved, but what we wanted to create was a book that delivered Usha's new principle and its possibilities with as much (visual) ease as possible. It was also important that it should appeal to other creative industries, not just fashion, which is why Usha didn’t want this to be a conventional pattern-cutting manual. The process offers possibilities that are relevant to other disciplines such as architecture, millinery, shoemaking and sculpture. The book was to be launched with a COS collection that used the process. 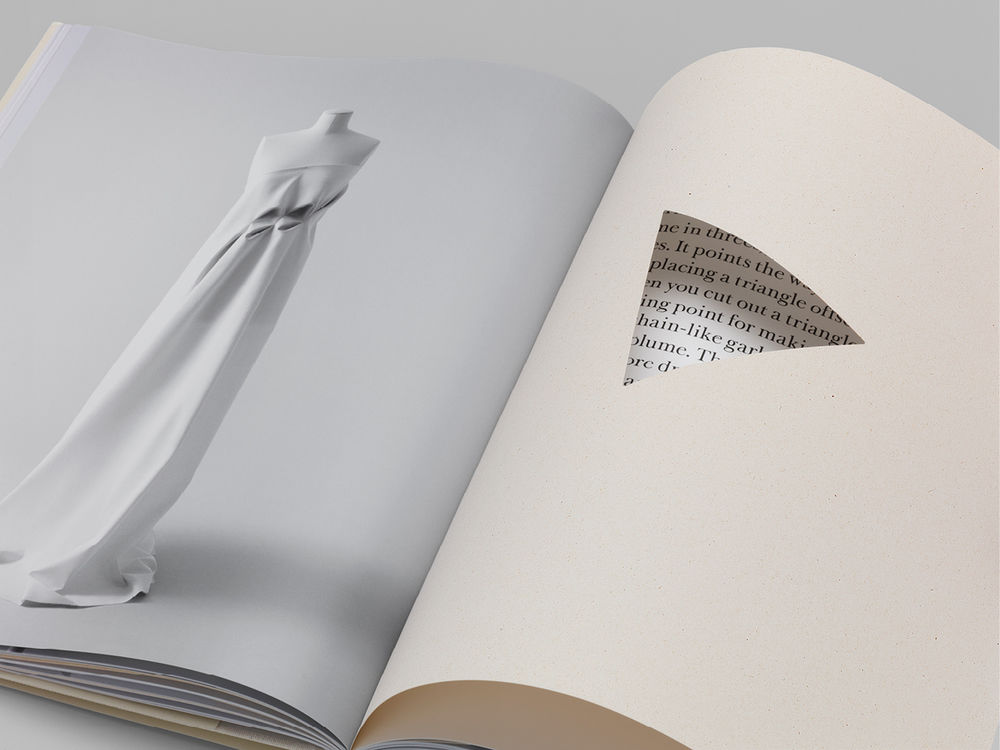 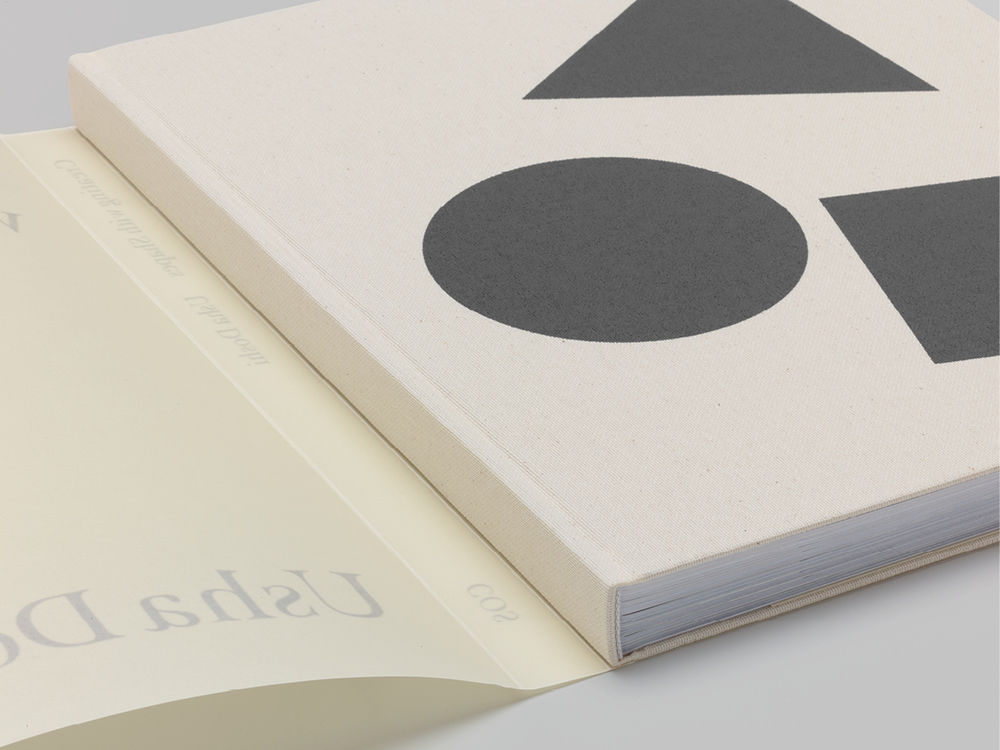 What are the key ideas that shaped its design?
I’d like to say that a book’s design is always in response to the very essence of its content but, of course, it's not: it's influenced by the mixed-bag of inherited imagery, the pre-determined format, the components of an identity to accommodate, an elected printer or a material you have to print on. With this project, however, we were commissioned to look after every element up to the delivered book.
This allowed for the design decisions to concentrate on content and structure, and I hope that Creating with Shapes is a true expression of the process it describes. The principles of Usha’s process are simple, starting with the cutting of a basic shape in fabric, but by contrast the results can be very complex, so it was relevant to make something that on one hand was very simple but, on the other, very rich. In a way, that set a tone for contrast, and the decision to make photography black and white and to reduce the colour palette throughout was a device that reflected the fact that Usha’s process could offer something multifaceted. Monochrome can somehow be both basic and complex, formal and informal, workmanlike and sophisticated, old and new, calm and theatrical. Although based in fashion, the book is a reference manual that I hope will have longevity. The devices we used were deliberate in being timeless.
The book is structured into chapters for seven shapes: a square, circle, triangle, rectangle, circle, oval and hexagon, followed a section of ‘Play’. As the starting shape gets more complex, the results become more dramatic, and there is a device within the photography — a gradient that runs from white to black through the book — that supports this simple narrative. It is the biggest idea in the book. As with a lot of the books we are involved in, there is a modesty to the design that allows the content to lead. In this case it felt more appropriate than ever, since there an intrinsic modesty to Usha and the process she has evolved. Imagery and texts aside, our job was one of making a succession of small, appropriate decisions that added up to a bigger sum. 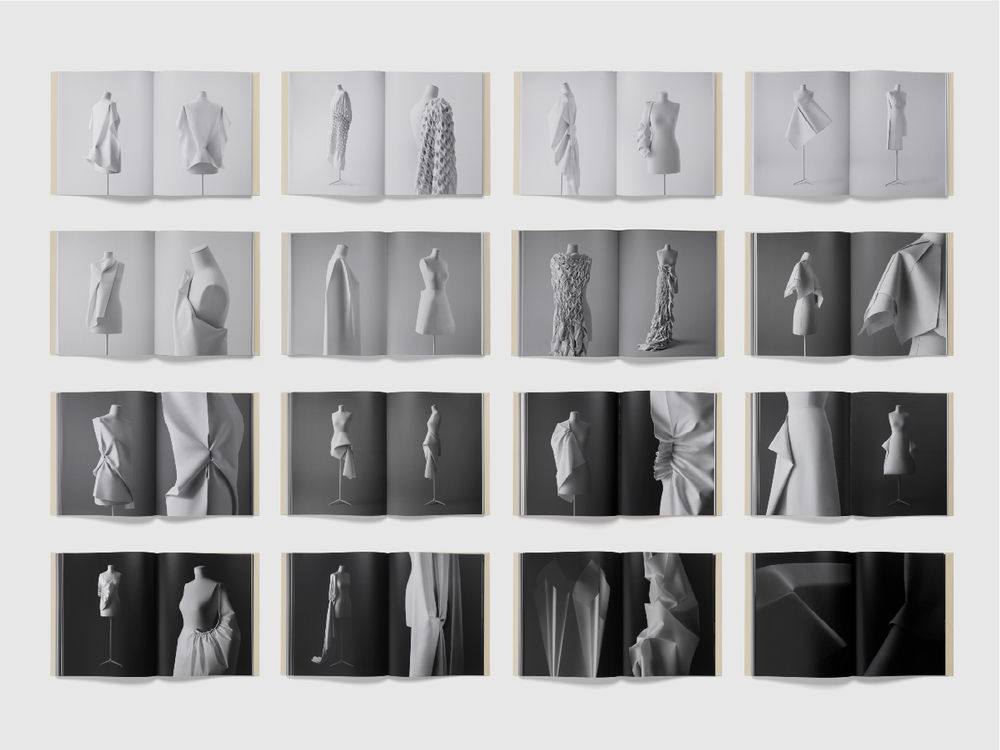 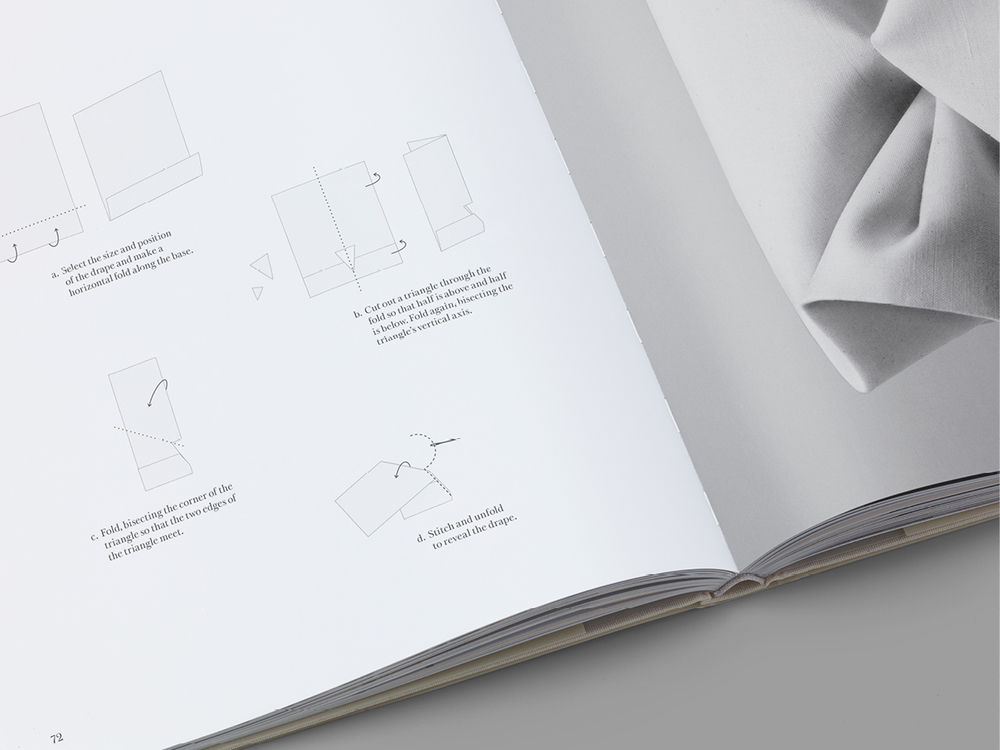 Tell us about the role that photography plays throughout the book...
The story is about shape and form, so the photography was the most important element. We were involved in all aspects: art direction, styling and retouching. It was shot at our studio, which allowed us to be present throughout the shoot, and we brought all the retouching in-house, again so that we could manage the detail. The photographer was Angela Moore, with whom we have worked extensively over the years. She takes beautiful images, but for a project like this, personality and temperament are also important. You are working intensely in close quarters for a long periods. As designers we are very hands-on and in this case learning about a process and making changes to direction as we went along. You need to know that you are working with someone who has the flexibility to support that way of working. We also had one of the COS team on set, preparing and sewing drapes as we needed them. It was work in process, and that fitted the subject and the spirit of Usha’s vision: playful and limitless. Nothing was really perfect. The creases, threads, pins and fabric salvage were all left in.
Although the results change depending on the fabric that is used, all of Usha's original examples were presented in calico, the most basic of fabrics used to produce toiles or dress-makers’ samples. It is neutral. The Helvetica of fashion. The decision to make the photography monochrome came, in part, from a desire to capture that sense of default and let the theatre of the fabric do the work. The photographs are illustrations of what can be achieved, and although made from fabric and held by a mannequin they are not complete items of clothing. Instead, we made unfinished fragments that hint at what they could be, shapes that may inspire a building or sculptural detail as much they could clothing.
On the final two days of the shoot the whole team made samples using different materials. This freeform moment was some light relief from calico, and became a moment of play at the end section of the book. 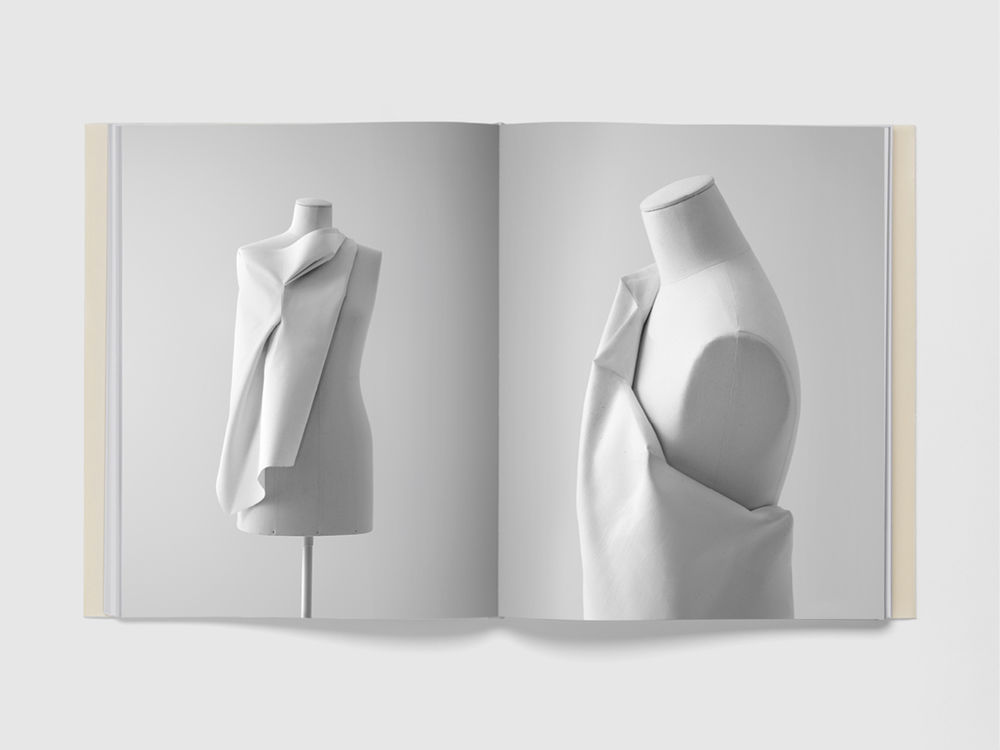 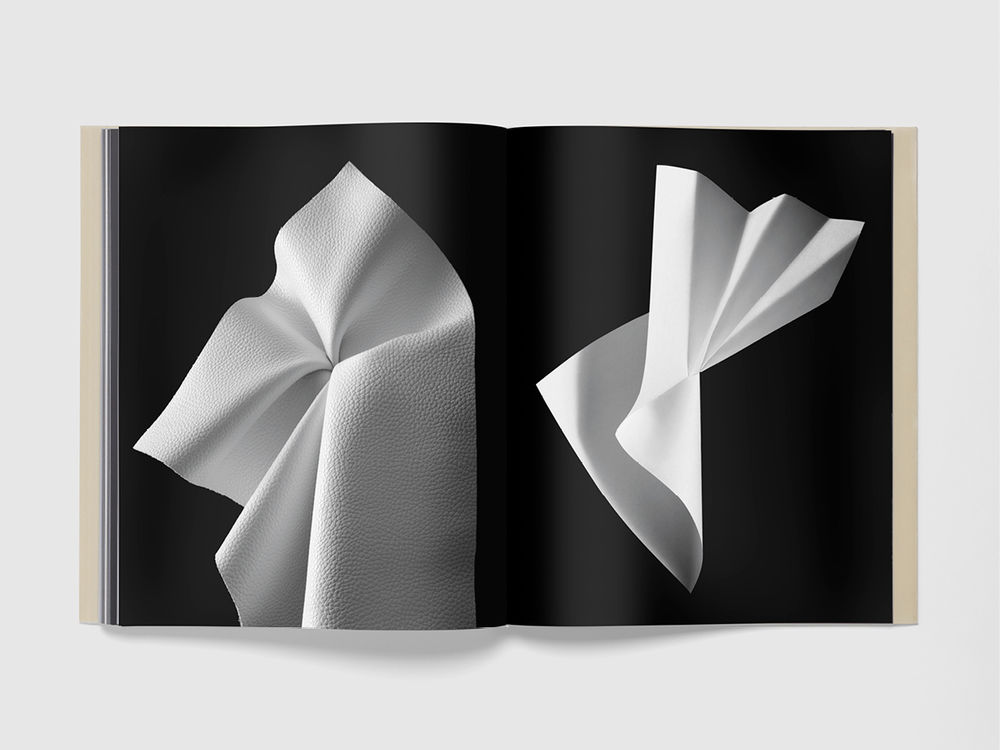 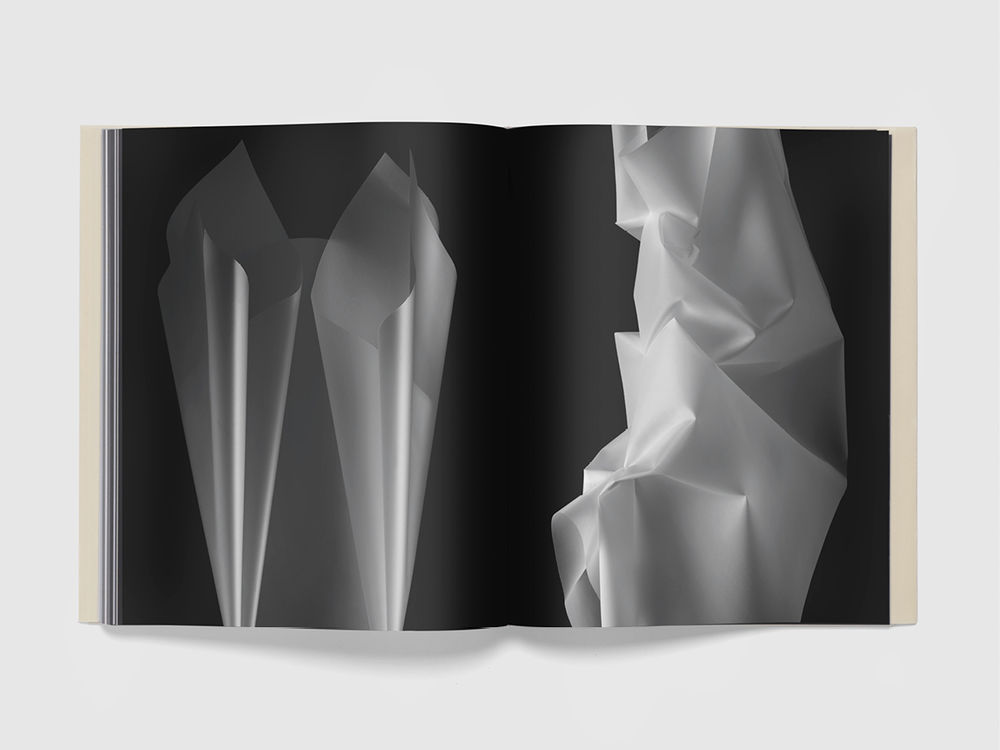 Creating with Shapes is a beautiful object — how has it been made, and what materials were used?
Making a book is like playing snakes and ladders. At any point things can slip and the effort you have put in can be scuppered; if the final binding of the book is badly done, it lets all the work to that point down. So having the overview on production is really important in getting the final result we want.
We didn’t want the design to be tricksy. The construction is conventional case binding and the material for imagery is consistent throughout: a coated material that allows us the best range of tonality. The chapters are divided by Remake from Fenner, a material made from recycled leather and, together with the a Wicotex cloth that lines the case, has all the bits and noise you find in the calico that is used throughout the photography. The dividers were die-cut and bound in sections where they were needed, and the return pages cut short, the remaining debris landing with the same informality that calico was used in for the imagery. The book wrap was Voile Ivoire, also by Fenner, a paraffin-dipped paper which gives it transparency and a waxy finish. It’s unfamiliar and has something organic but also modern. It felt very COS.
Good production and ways to look after the process and proofing throughout is essential. We printed in the UK with Pureprint, with whom we have worked for many years. Being in the UK allows us to follow the process in detail. All images were printed tri-tone, which gives us huge flexibility to get the blackest blacks while retaining delicacy in the highlights. 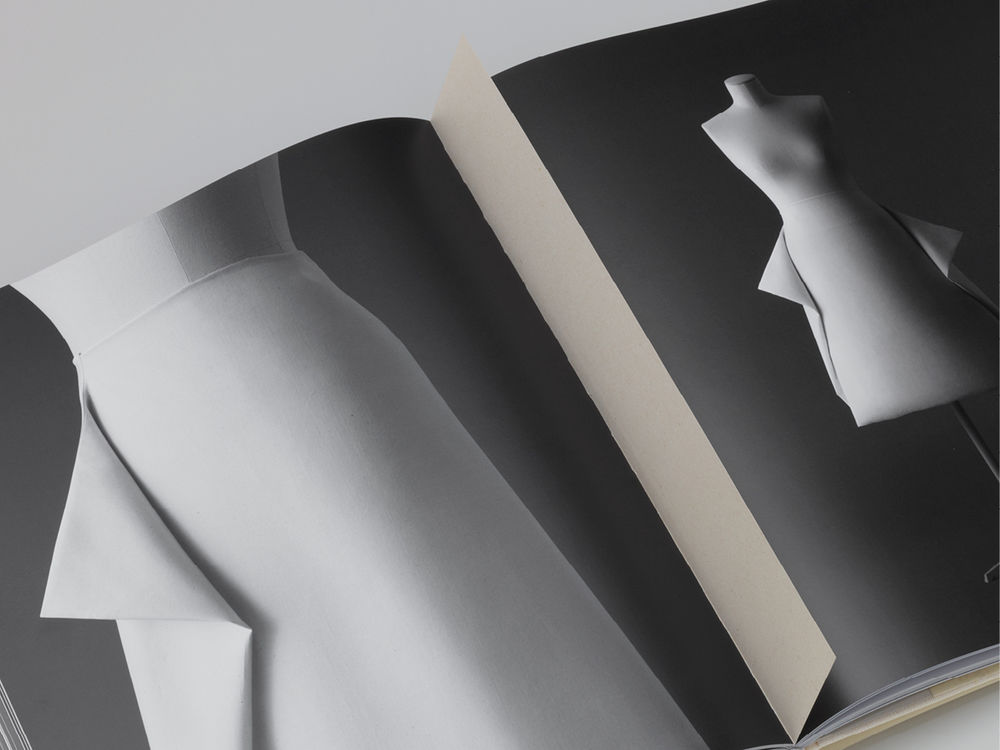 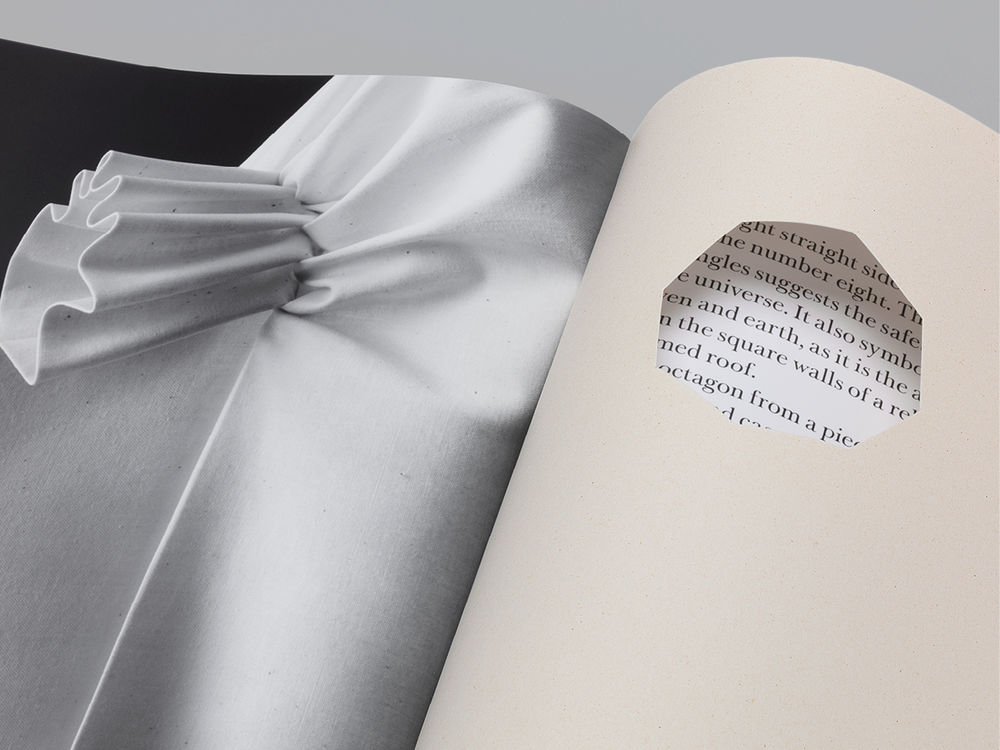 What has been the most interesting challenge you encountered throughout this project?
We needed to have an understanding of pattern-making in order to appreciate where Usha's new process sat. Sometimes you have to get under the skin of how something works in order to be able to convincingly articulate it in a clear and truthful way. That was a huge learning curve, and one that went on throughout the process of design and production. We learnt so much that I think we were ready to do the book by the time we had finished. Making simple things is hard, and this was particularly true in light of this being a manual. We were constantly trying to set the clarity of instruction against it being elegant and engaging. 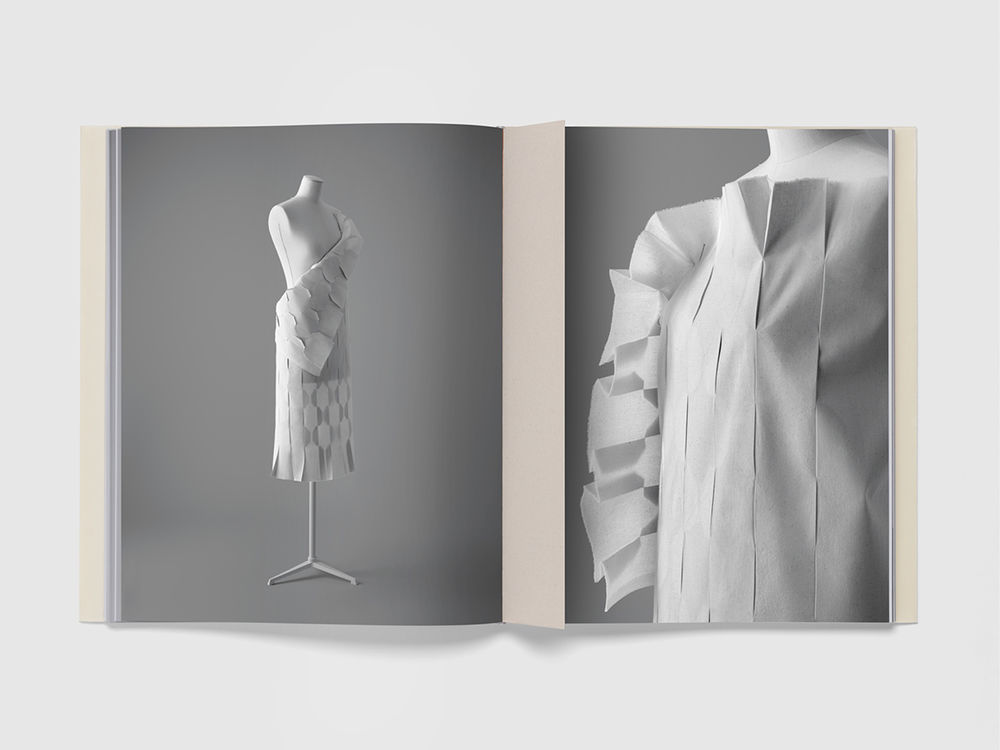 The existing COS visual identity is very distinctive; how did this influence your design approach for the book, and did it affect the parameters within which you worked?
We wanted it to have COS DNA without actually using any of the identity components. It's a stand-alone book, not a corporate gesture. Given COS’ engagement with the subject, it brought with it some decision-making that was naturally reductive and, in its nature, very COS: the use of monochrome; the pale and default nature of of calico; the simple shapes at the heart of the idea. There were definitely some decisions that felt appropriately COS, such as a sheer coating on the images to give a hard matt finish, but the the most overt nod to their identity was the type that we use throughout. Set in one size and weight, it is a version of Fry's Baskerville that we had redrawn for the project. A serifed relative of Gill, the COS house font, it has the same proportions and all the human warmth.
What are you working on next?
Amongst other things, a set of identities for LUMA Foundation and its connected activities, including LUMA Arles that is being constructed in the the south of France.
graphicthoughtfacility.com
Creating with Shapes on the COS site 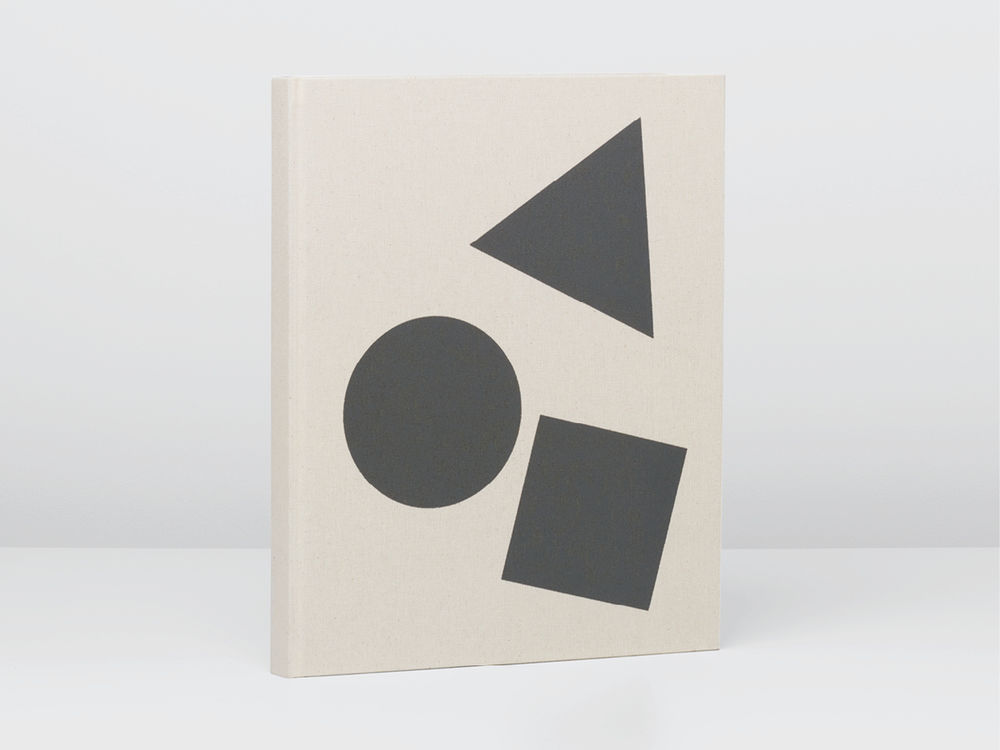 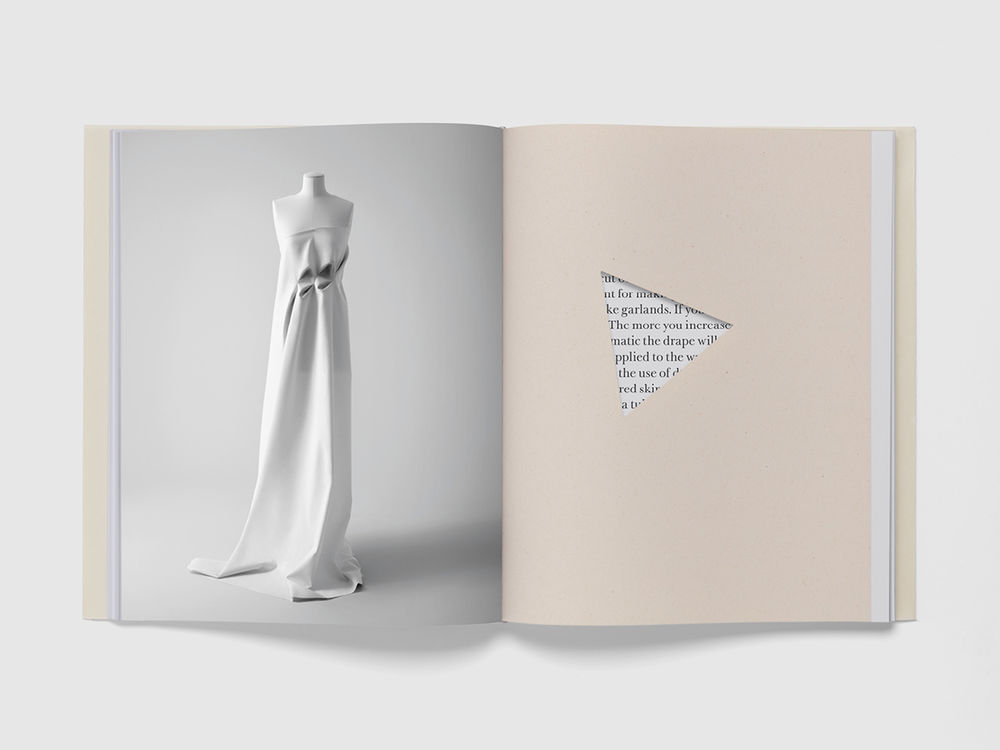