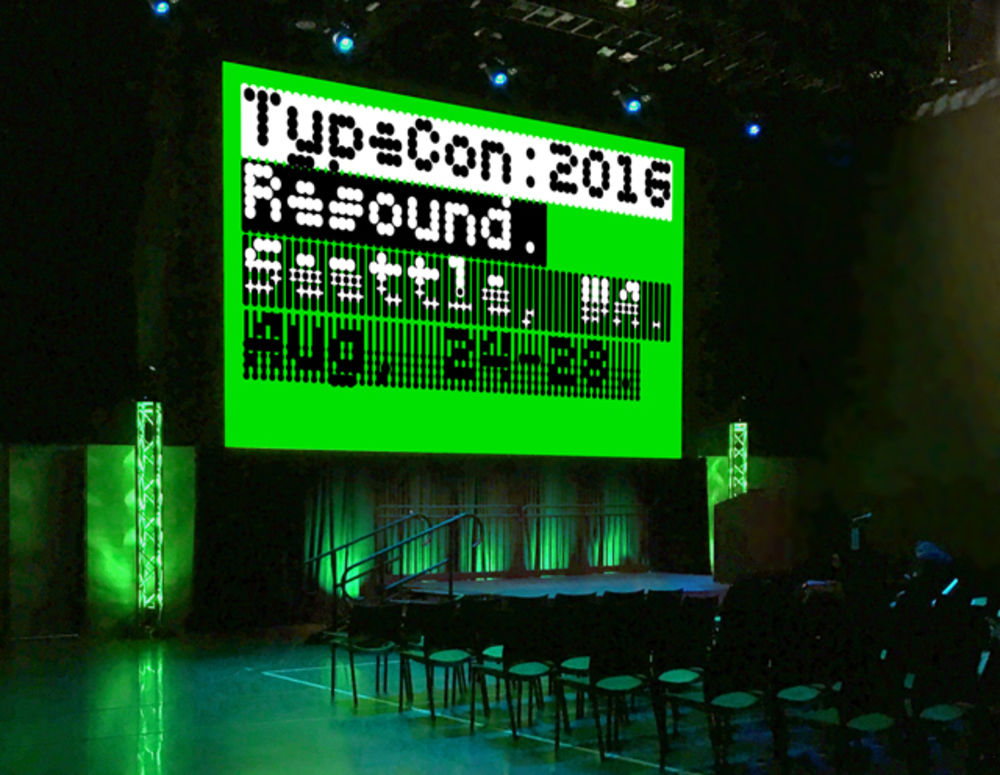 TypeCon is the very popular annual type convention organised by the Society of Typographic Aficionados (aka SOTA). MuirMcNeil was invited to design the visual identity for this year's conference in Seattle, WA – we caught up with Hamish Muir and Paul McNeil to find out whether it was a dream job, or a poisoned chalice…

How did the project first come about? Have you attended TypeCon before and did you know what to expect?
We were invited to develop the TypeCon 2016 Identity by the graphic designer Corey Holms on behalf of the Board of the Society of Typographic Aficionados. We’ve been corresponding with Corey, on and off, for some years. Knowing him to be someone who appreciates our approach towards visual communications, we took the project on without hesitation.

Although we have both attended design conventions and type conferences before, neither of us had attended a TypeCon event previously. However, we are familiar with the joys and perils of working on projects for design conscious audiences. Corey’s brief was very clear regarding SOTA’s expectations and we were offered the opportunity to define the level of commitment that would be required of us – to provide either a loose design framework for implementation by SOTA, or a comprehensive bells and whistles identity, or something in between. We decided to provide the complete package with production and fulfilment being coordinated in the USA under Corey’s management. This was huge undertaking; one of the biggest projects we have worked on but also one of the most enjoyable.

What did the original brief involve and did it change at all? Were there any restrictions placed on you by the organisers
Because the SOTA team have managed the presentation of this event for many years, every detail of their specific requirements, from outputs to deadlines, was very clearly defined in the brief although the creative direction was left completely open. It’s a longstanding SOTA tradition to invite a different design group to develop the identity each year so we anticipated that our systematic explorations of visual communications would not come as a shock to the members of the board – although it may well have done so.

The approach we take in all of our work is to try to communicate in a clear tone, without redundancies or any attempt to create an autonomous ‘composition’. We focus on creating frictions between language and form in visual hierarchies that deliberately invite a negotiation between the act of reading and the act of looking.

Our design for TypeCon 2016 followed these principles in a way that, we hoped, would challenge the more conservative factions of the type design community and be appreciated by the less so. We submitted only one design proposal, remotely, and were very pleased that it was accepted without conditions or modifications. 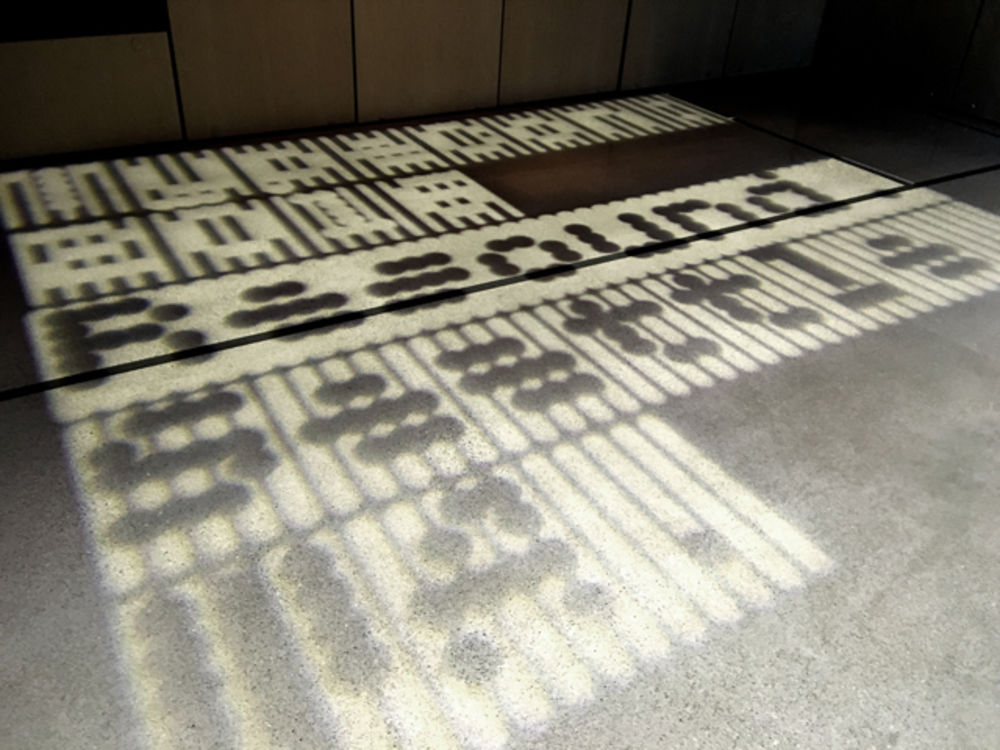 Gobo at the entrance to the auditorium at the Amazon Doppler Tower, Seattle WA

How did the conference theme ‘Resound’ inform your approach?
Initially, we asked SOTA to allow us to drop the name completely as we considered it both hackneyed and contrived to give an event a name from which to build a theme, an image and an identity. But it is a tradition at TypeCon for the Board to select a name by popular vote and was therefore regarded as one of the few mandatory restrictions in the brief. This proved unexpectedly helpful as it allowed us to experiment with numerous iterations that visualised frequencies and patterns in several multi-coloured layers. Eventually we reduced these frequency layers to fit a restricted colour palette of black, white and neon green, integrating ‘Resound’ within the information system rather than giving it any particular emphasis. Bright green was chosen partly for its association with Seattle as the ‘Emerald City’ and as the Seattle Seahawks’ team colours, partly for its functionality in relation to black and white and mainly because it is such a gorgeously eye-popping colour.

The flexible system you created allows for many permutations – was this playful approach deliberately at odds with what could be considered quite a serious design conference?
The TypeCon identity is typeset, rather than drawn, using elements from MuirMcNeil’s TwoPlus type system exclusively. This was developed as a custom monospaced family for TypeCon, built on the framework of our earlier TwoPoint type system. All 76 TwoPoint and TwoPlus fonts map to the same set of core outlines which can be manipulated in layers to provide a huge number of variations, somewhat like unpredictable mutations of historical chromatic fonts.

All of the visual components are plain geometric forms and their structural relationships are governed by a few equally simple conditions: use only one size of type; allow the format to dictate line breaks, information flow and overall shape; use contrasts between glyph-based overlays and background panels to become more or less legible;  emphasise or diminish parts of the information hierarchy accordingly.

The playfulness of TypeCon identity is the direct product of its own system. In essence, the identity is the expression of a set of logical rules in a variety of visual outputs, everything from badges to programmes to interstitial animated movies. The algorithmic principles employed might be said to mirror the methods used by contemporary type designers, where sophisticated structures can be built parametrically on axes of weight, width, optical size and so on. Likewise, the use of geometric letterforms that resemble bitmaps also reflects the origins of digital type design. However, a key feature of our method is that its end results can be volatile, unpredictable and unfettered by notions of good or bad taste. For this reason, the design might be perceived as somewhat provocative in the way it challenges accepted conventions of legibility in the context of a 'serious' type conference. But, for us, seriousness is seriously overrated. 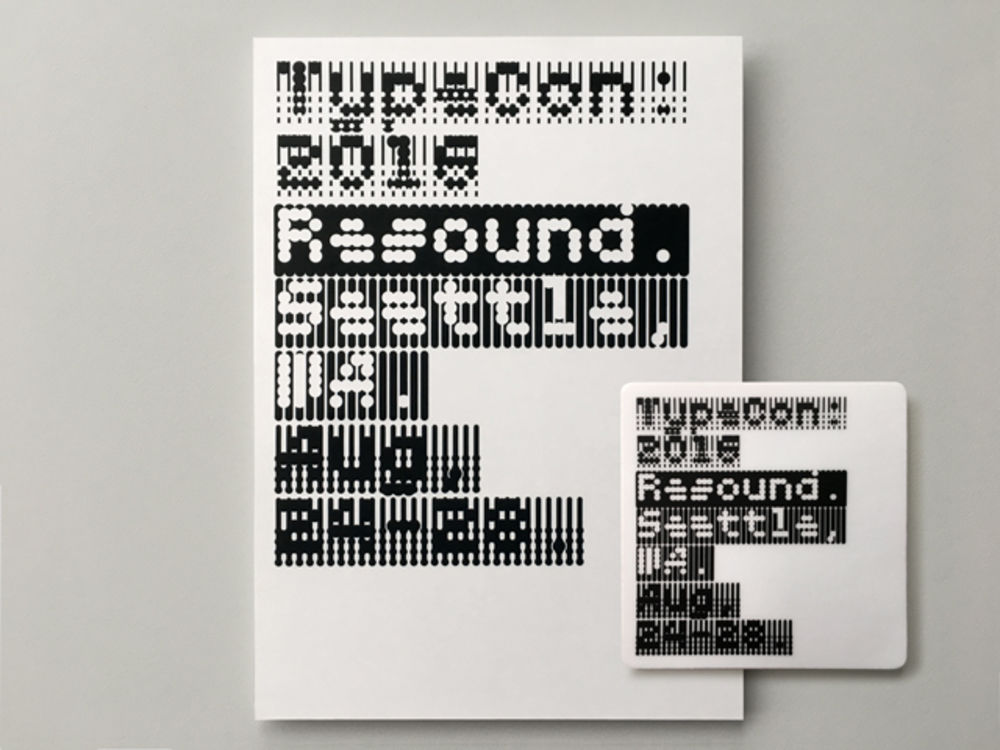 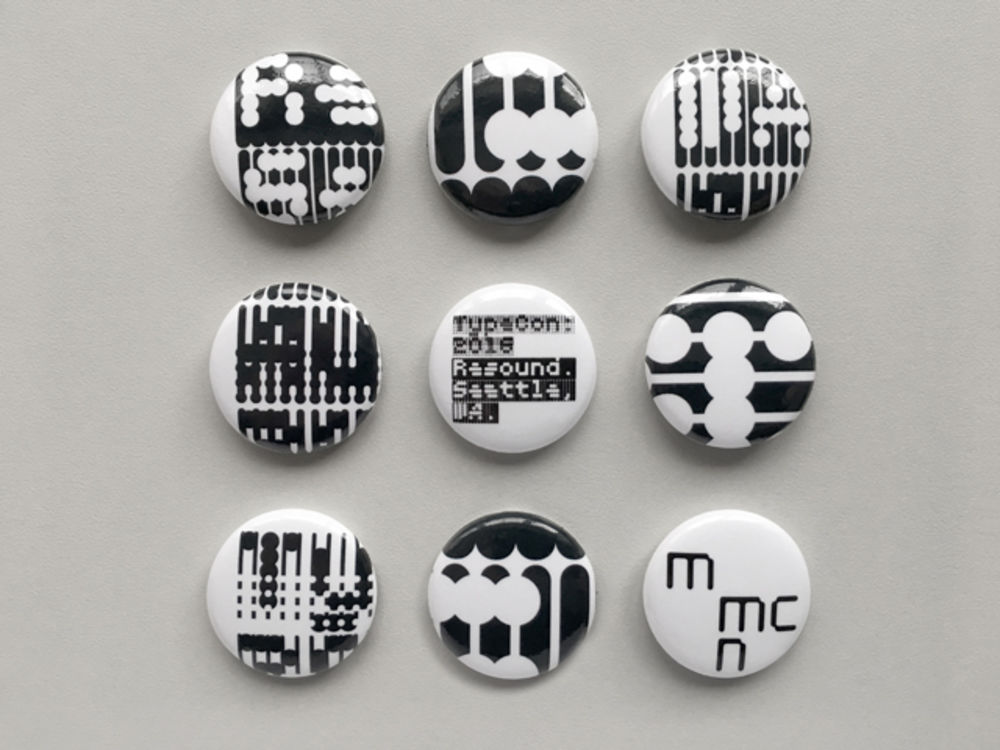 What were the main challenges involved with implementing the visual identity? Are there any elements which you’re particularly pleased with?
The challenges and successes correspond with one another exactly, from our perspective. Once the system’s parameters had been defined, the most difficult task was to implement the hierarchy across both colour and monochrome palettes in print and screen applications. We needed to achieve variety and differentiation while maintaining coherence in an identity where no individual application, word or mark is permanently fixed. For us, the most successful feature of the project is the way in which the identity operates as a dynamic system, the sum of its parts built entirely from minute geometries in black, white and green.

We are increasingly interested in exploring relationships of geometry and time using MuirMcNeil type systems in moving image applications. Our short animation for TypeCon 2016 explores the potential of modular type in generating a multilayered information environment. To adapt the typographic approach used for the static elements of the identity to motion graphics, we defined parameters that would regulate the animation process. The timing of frame motion for text elements, foreground and background panels was programmed in increments proportionate to the dot pitch for each font size used on screen. As a result, the animation was a product of the text content itself, intended to extend the visual grammar of the identity by emphasising both the textual and textural attributes of the system.

Logo – the TypeCon 2016 identity uses a flexible visual system across all applications.

What are the pros and cons of designing for a bunch of designers? Was it intimidating knowing that your designs would be carefully scrutinised by the great and the good of the type world?
We’d agree that the great and the good of the type world can be intimidating, downright cantankerous even. But perhaps they are just a little insecure and somewhat myopic, reflecting Franco Grignani’s comment about type designers when working with the Nebiolo foundry in the 1960s: “Someone who only ever draws typefaces can’t know the secrets of another part of the world that deals with other visual problems”. Our work focusses on some of those other problems, which we find more engaging. We’ve been delighted by the warm responses of the many people who have understood the aims and intentions of the TypeCon 2016 identity while appreciating its systems aesthetic.

SOTA were very supportive of our approach throughout and having an accomplished designer in Corey Holms as our client contact was crucial in progressing the design. For us, one of the main reasons for undertaking any project is to develop our understanding and our practise. To be able to do so without compromise, in an applied brief, was an exceptionally rewarding experience.

What’s next for MuirMcNeil?
We have a few projects that we are planning to publish soon, possibly as type systems or possibly as visual applications. We are also working on some commissions due for publication in the near future. Teaching, talking about design and delivering public workshops also keeps us very busy. 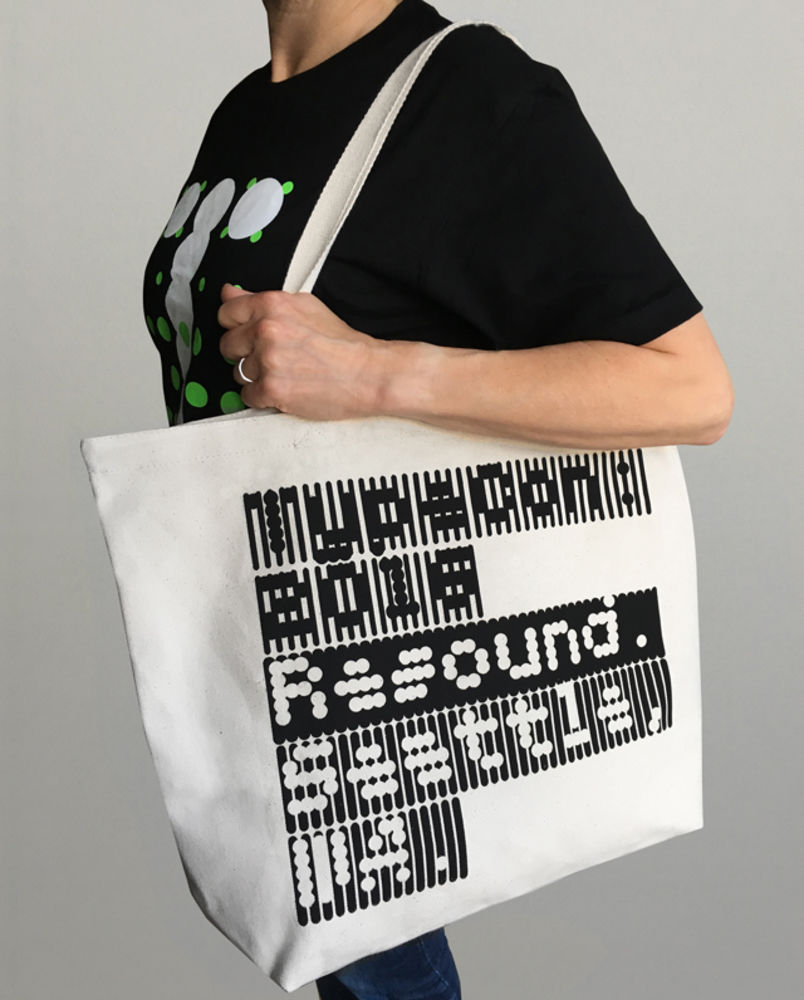 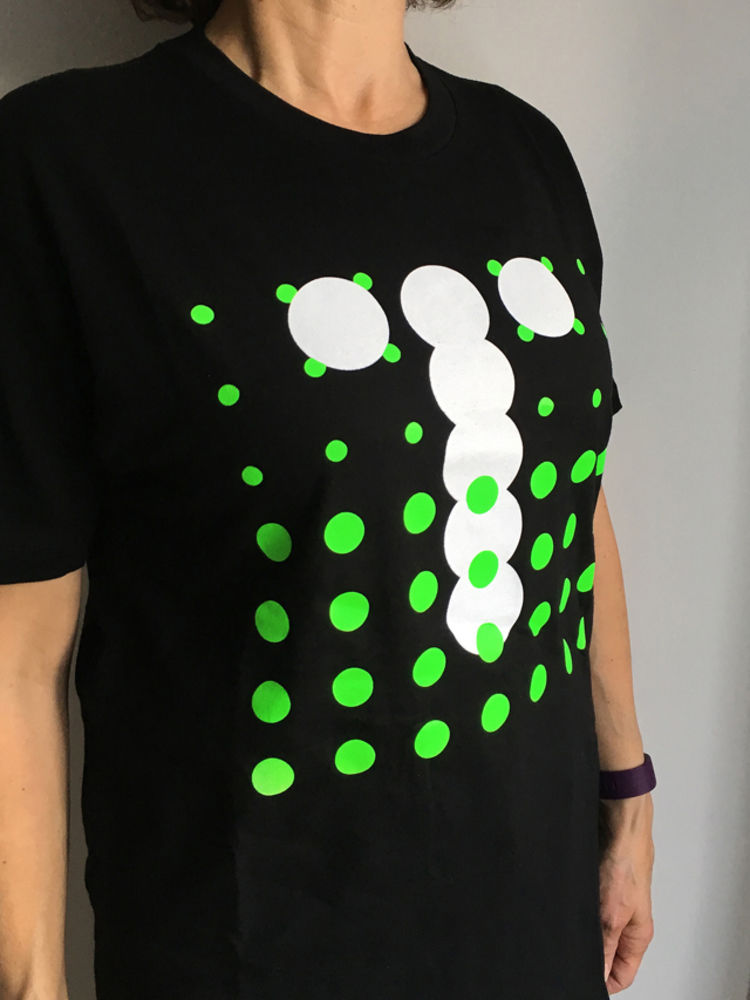