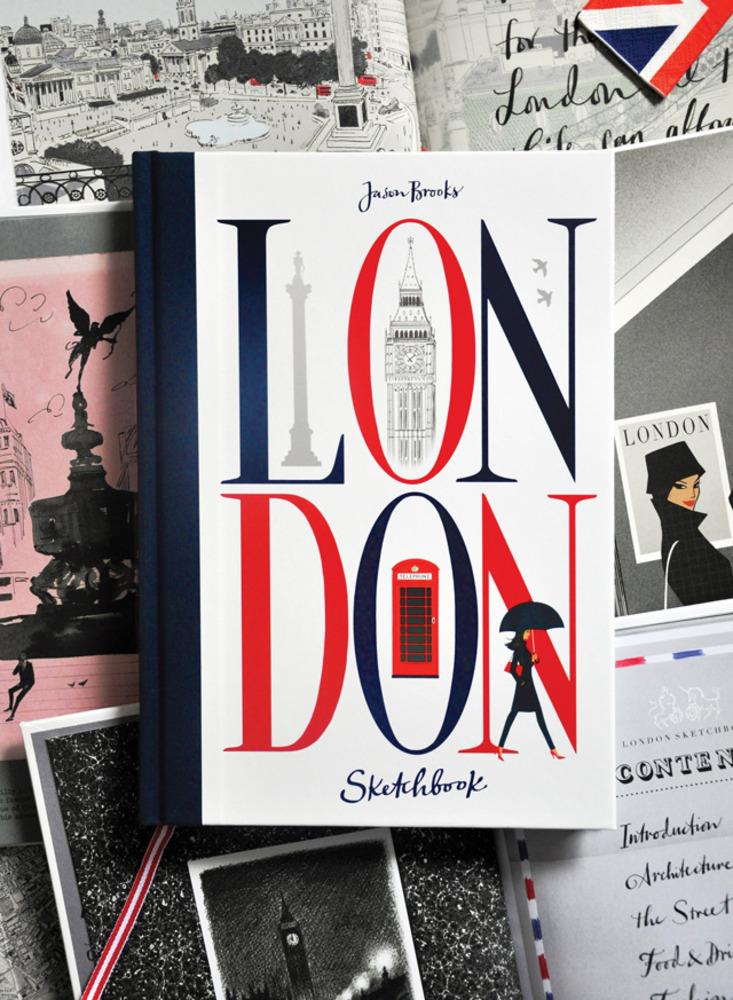 How often do you visit London?
I live in Brighton so I probably visit London two or three times a month for various reasons. For London Sketchbook I tended to work in seven-to-ten day bursts, which involved a lot of walking and travelling on public transport all over the city, in order to draw and photograph on location. I also got  through several umbrellas.
How did your ‘Sketchbook’ series for Laurence King originally come about?
The City Sketchbook series came about when I was introduced to Helen Rochester (a commissioning editor at Laurence King)
at a private view held by the Fashion Illustration Gallery, on Cork Street. A small group of us were chatting, as you do at private views, and the conversation turned to dream publishing projects. I described my dream project as a series of colourful illustrated travel journals focusing on different cities around the world that would be part-sketchbook, part-travel guide.

I think Helen could sense my genuine enthusiasm and passion for this idea and she suggested I come in for a meeting once I had put together a more detailed and formal book proposal.

The meeting was held a couple of weeks later and a month or so after that I was given the green light to begin Paris Sketchbook. 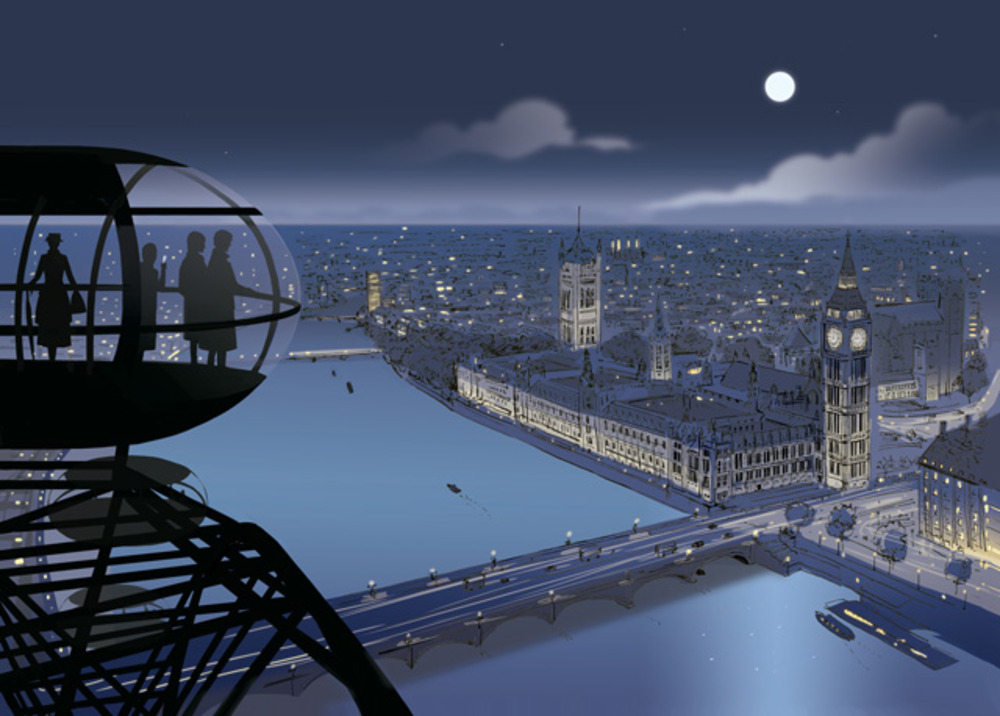 View from the London Eye at night 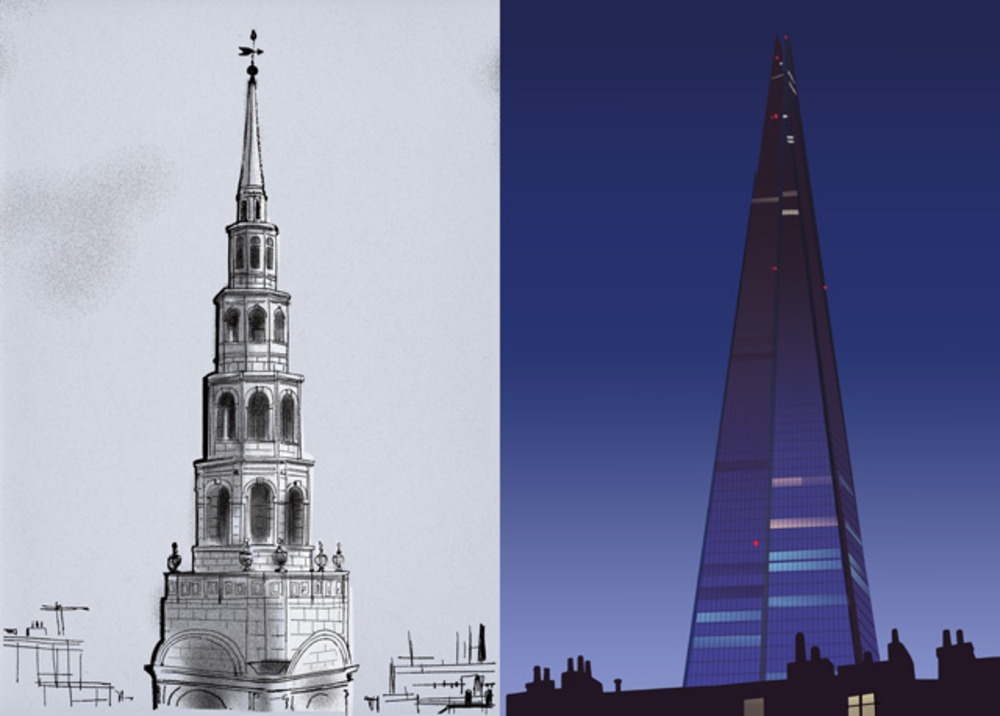 St Bride's Church and The Shard 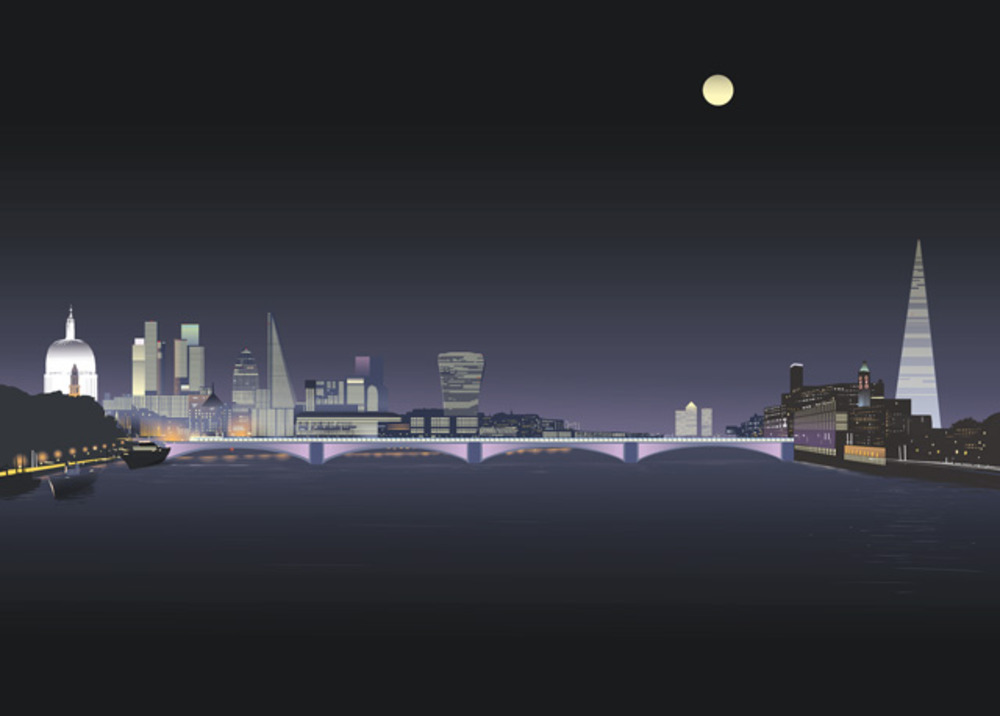 Can you describe your working methods?
A sense of authenticity is essential when illustrating travel, so initially I do a lot of work on location. For London Sketchbook this involved appointments that included Paul Smith, Norton and Son's tailors on Savile Row, Globe Trotter suitcases and many others, but I also visited a lot of public spaces, museums and galleries with a sketchbook, pens and pencils.

At each location I made several quite detailed drawings as well as sketches of separate elements, and took reference photographs. All of this material then goes into what I think of as 'post production' phase where illustrations are adjusted for the final book using Photoshop on a Mac. I don't really see any boundaries between media, so the finished printed book is the final object I aim for, rather than being too precious about the processes I use to get there.

For London Sketchbook I used everything from oil pastel and ink resist (the texture for the Tower of London and the brickwork of Bedford Square), to dip pen and ink for the market scenes, to Photoshop for the Shard. It seems natural and logical to adapt the media I use to suit each subject, in the same way that I adapt my style and approach for different projects for clients.
What’s the most common reaction from people when you’re out sketching?
It varies between countries and locations. In Guatemala as a student I sometimes drew a curious crowd that was so dense I could barely see out. In Paris, cafés are brilliant because no one really bats an eyelid, there is an endless source of refreshments and plenty of subjects to draw. In London, people were friendly and curious but I often found myself standing up to draw quite complicated scenes, so it was obviously important to be slightly out of the way rather than standing in a stream of people. There is a certain technique to holding an open drawing book, making the drawing itself and avoiding people crashing into you, so I developed a way of bracing my sketchbook against my chest, anticipating wayward passers by, and keeping my elbows in. 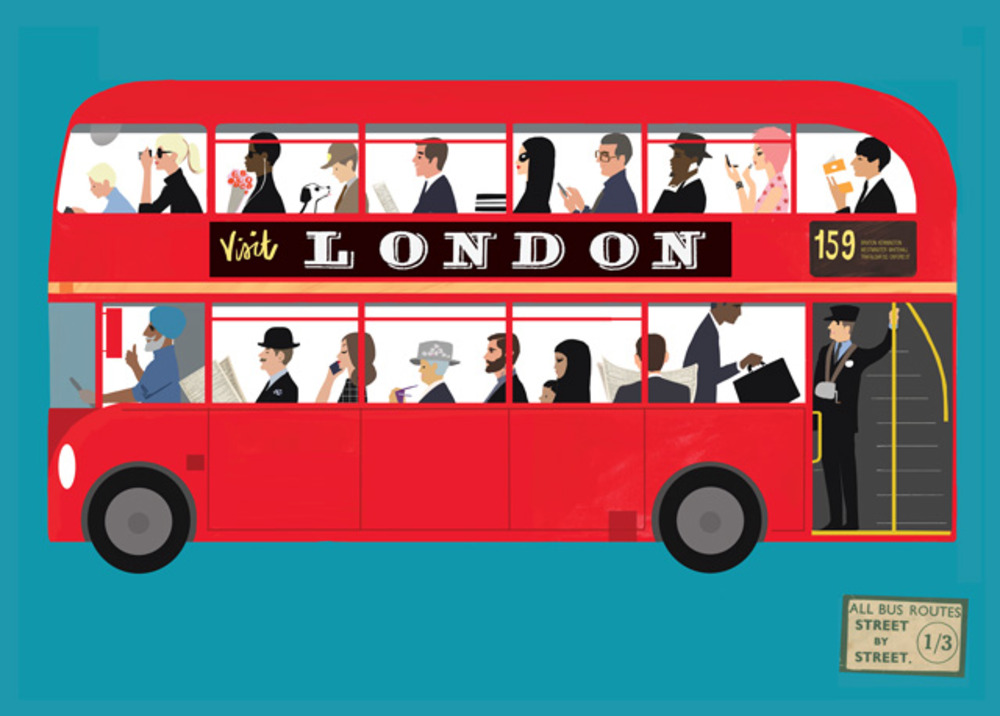 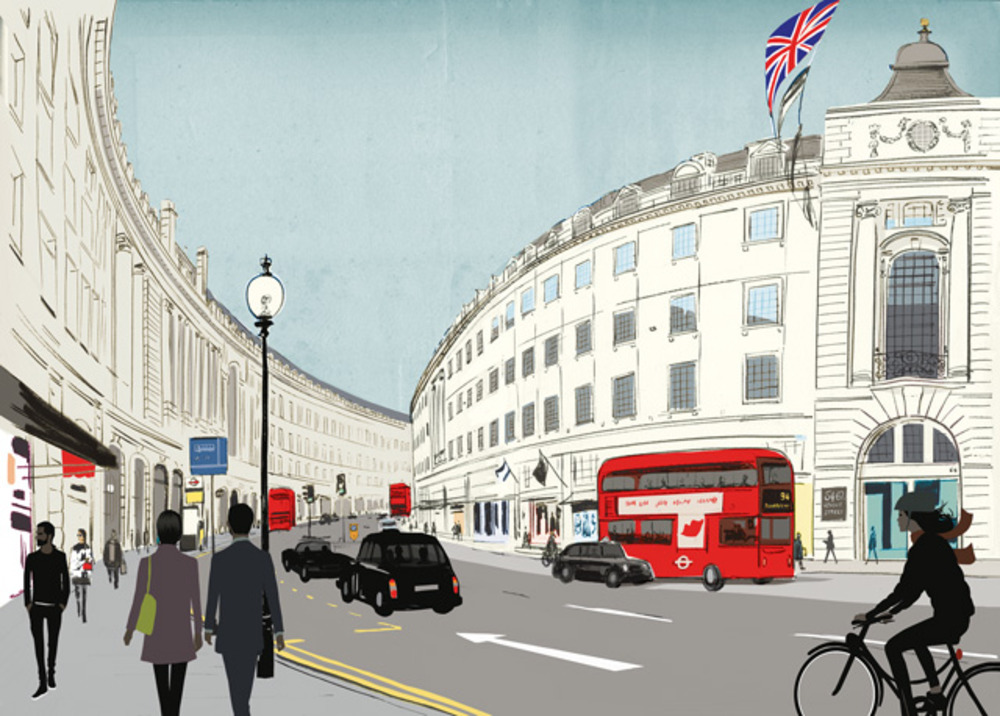 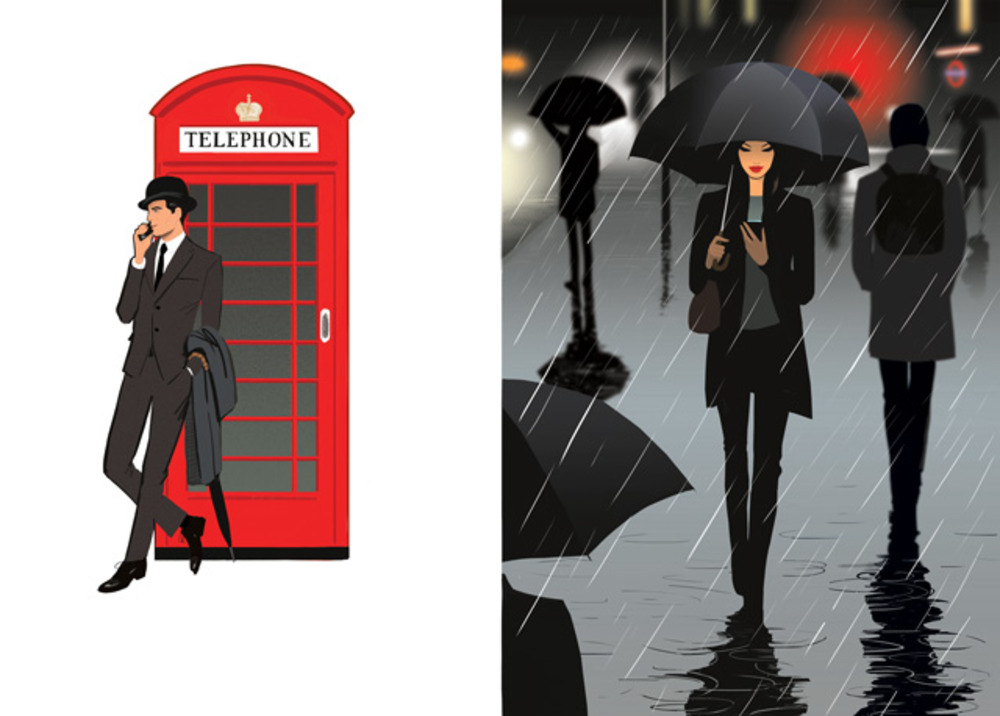 Describe your perfect day (and evening) out in London.
Let's face it a perfect day in London can get expensive, so assuming money was not a consideration (but without going for flats in Mayfair or vintage Astons), I would start the day with an early breakfast at the Wolseley, probably Eggs Benedict and an expresso with brown sugar like the Italians drink, and maybe do some sketching of print ideas or my fellow diners.

Next  I would walk up to Dover Street Market and then to the Paul Smith shop on Albemarle Street, but also look in on Prada, Alexander McQueen and the Louis Vuitton bookshop, all in that area around Old Bond Street. There are often some great shop windows and amazing product designs to take in. Ralph Lauren Home is a bit of a guilty pleasure too, the room sets downstairs are amazing and they have a great bathroom if you ever get caught short...

My ideal day would then involve buying a piece of art on Cork Street, in a dream scenario a Picasso from Waddingtons, but a Hockney from Alan Cristea would also be nice...Failing that, just exploring the galleries on Cork Street is always interesting.

Next, Sotheby's often have interesting pre-sale viewings that anyone can go to. Just walk in and up the stairs to the left. Sometimes an auction may be in progress  which is also interesting to look in on.

For lunch I would meet someone fun at Cecconi's Italian restaurant, and eat at a table with a street view. Then we would go to the Royal Academy – this would be an early summer week day, so not too crowded, and in my dream scenario we'd see either a huge Picasso exhibition or an exhibition of 20th Century fashion illustration and photography. About the size of the summer exhibition but with all the pictures at eye level.

Then maybe a traditional drink and some crisps at The Chequers pub, which is right in front of The White Cube gallery in Mason's Yard. Later that afternoon I would browse books from Hatchards or Waterstones on Piccadilly, Magma on Earlham Street, or maybe take a look at the rare books in Cecil Court.

Evening would involve meeting friends for cocktails somewhere – maybe at the Experimental Cocktail club on Gerard Street – and an early dinner at J.Sheekey, followed by either a performance at Covent Garden or a blockbuster in Leicester Square. If we had any energy left the night could continue with drinks at the Edition Hotel – their milk punch is amazing.

So essentially good food, good company, lots of art, and I would probably go home with my wife and a few books under my arm. 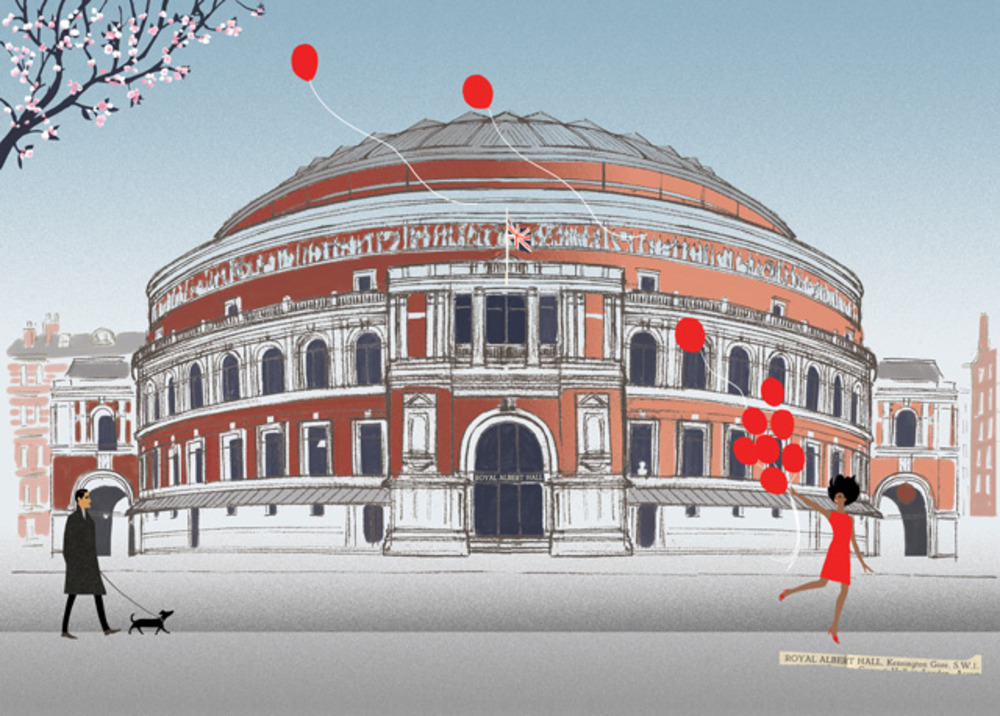 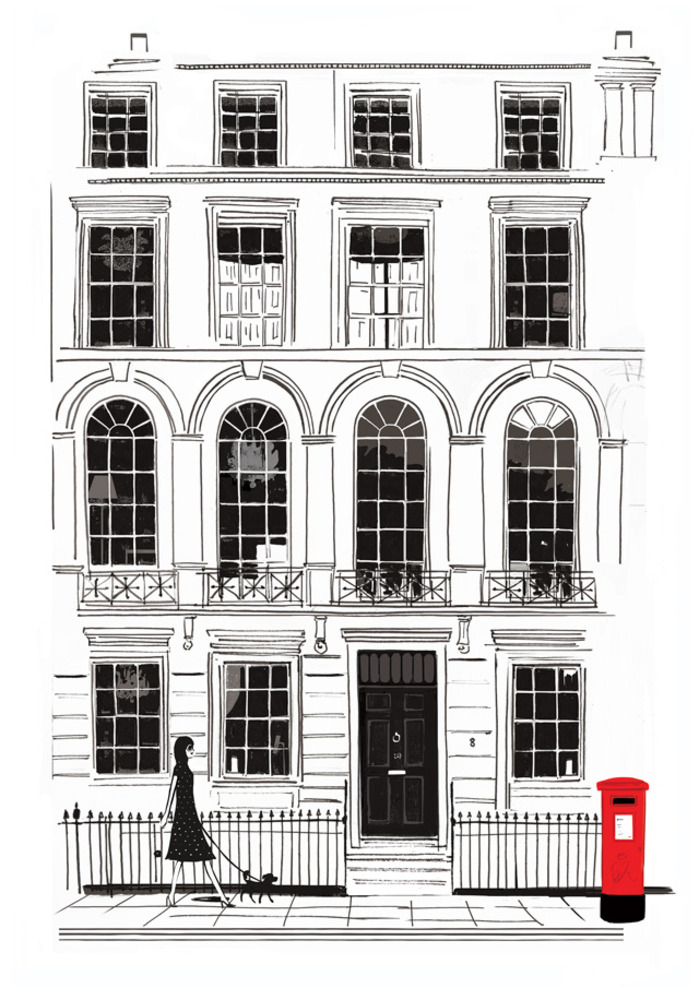 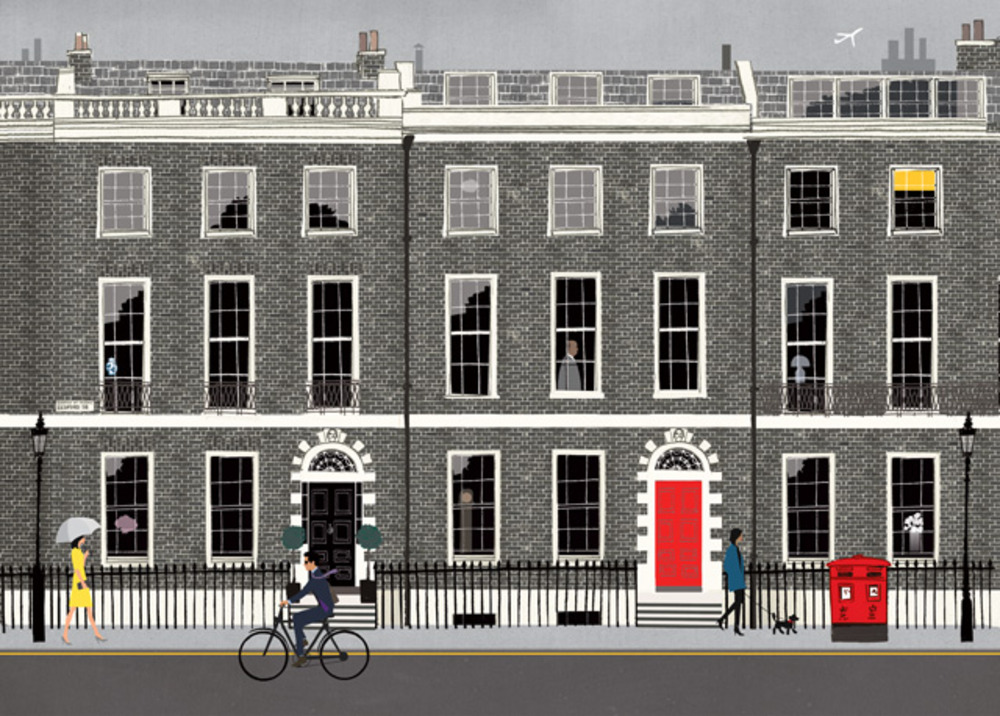 What’s the city’s best kept secret? And where’s best to avoid?
Best kept secret? I love Dennis Severs' House in the East End, it's a magical treat for the uninitiated, especially at Christmas and the illustrations from there are some of my favourites in London Sketchbook. Best to avoid? Oxford Street – apart from Selfridges.
David Downton was Claridges' first artist in residence, if you could take up residence anywhere in London, where would it be?
I would choose the Beaumont in Mayfair. It's relatively new, but its style is very glamorous 1920's pre-war London. 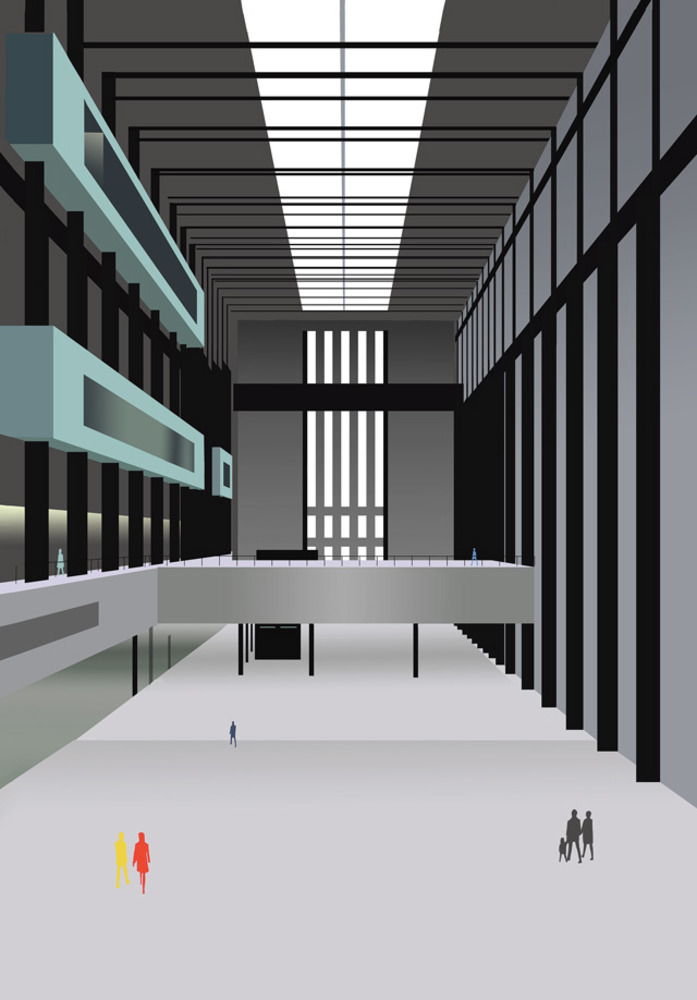 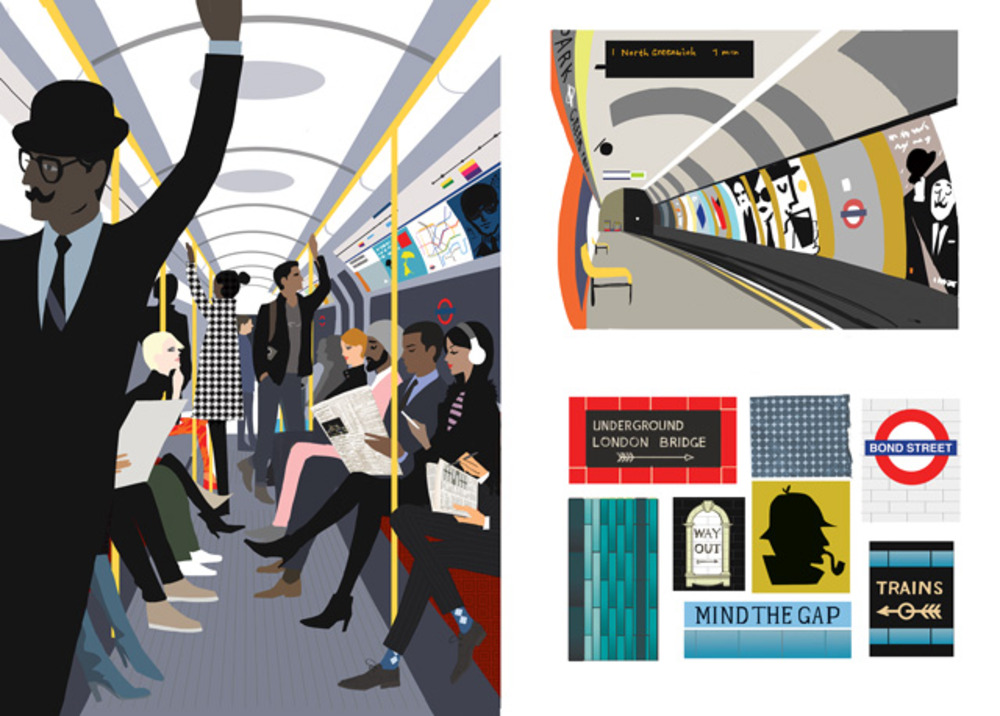 Like any city, London has its problems. What’s the one thing you’d change about London if you could?
There's no doubt London needs far more affordable housing for the essential people who keep the city going.
Paris, London….where next?
I'm mid way through working on New York Sketchbook, due out in 2016...

Laurence King Publishing is offering Grafik readers the chance to buy London Sketchbook for the (cheaper than Amazon) price of £13.00.

Just click here and enter the code: LDNGRFK at the checkout before 02 March 2015 to take advantage of this special price.