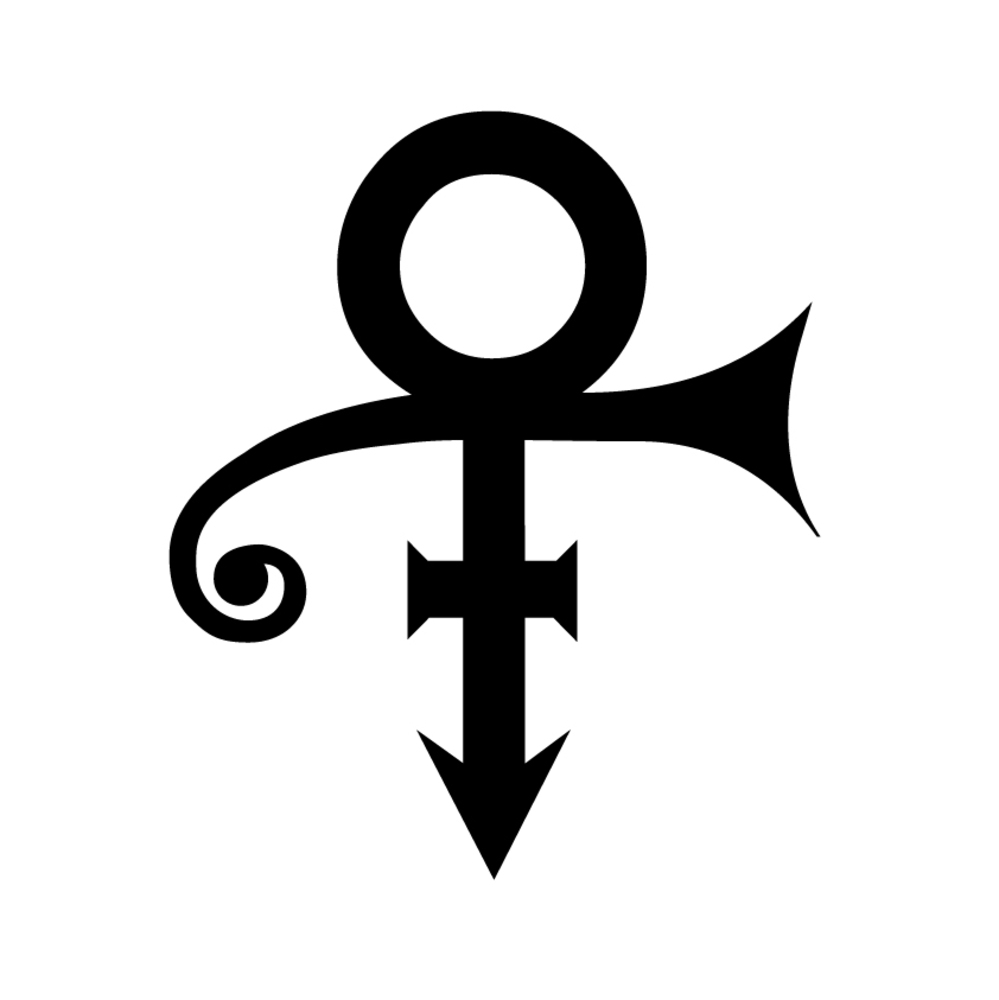 Above is the graphic marque of sex. Or, as he’s more commonly known, Prince.
No one in pop has written more powerfully about this particular subject matter. The simple lyric from his 1999 album, “I sincerely want to f**k the taste out of your mouth”, for me, puts this beyond reasonable doubt. It’s through these sexually proactive, perverse and often humorous stories that Prince has opened up a different idea of sex. Through his carnal lyrics he invites men to imagine a different way of relating to women, and in return invites women to imagine the possibilities of men who imagine such things. But it wasn’t until 1993 that he gave his idea of sex a symbol: a graphic marque to embody and evoke everything that the mononymous man stood up for. But he’s not just a sex symbol, he’s actually a symbol – this symbol.
A graphic threesome, the male gender symbol joins its female counterpart and the alchemy symbol for soapstone (apparently to reflect his artistic genius) to make the design of the colloquial Love Symbol both erotic, flamboyant and omnisexual – perfect for Prince. And he should know, adding “Designed” to the now ubiquitous legend: “Produced, Arranged, Composed and Performed by Prince”.
But, as with every logotype, icon or symbol, it is only the point of entry for any brand. It only really comes into its own when its identity is expressed – and this is something Prince has done to a standard that most graphic designers would be proud to have conquered. To see this you just have to take a look at brand Prince.

Just look at what a crucial part of his identity the Love Symbol forms. Helped along with a colour palette consisting of the core colour, purple; secondary colours gold, peach, and black. All of which can be applied onto a variety of suggestive, racy (including bottom-baring) attire – usually ruffled shirts and velvet suits.

Photography favours brooding poses, overflowing with innuendo, and I think we’ve covered tone of voice with THOSE lyrics. These are all brought together in Prince’s cuban-heeled, hip-pumping, sex-crazed, gymnastic performances that just-so-happen to be on a stage shaped literally as his Symbol.
But if this sexual meaning and prowess were still in any doubt, one performance left a very graphic definition. At Super Bowl XLI, Prince performed a guitar solo during Purple Rain in which his shadow was projected onto a large, flowing sheet. As he let rip, the silhouette cast by his figure along with his symbol-shaped guitar had phallic connotations – he even stroked the neck of the guitar in a familiar motion – now how’s that for brand extension?